A system that can support up to 19 GPUs!

From what we can see the age of mining is here to stay, with the world seeing increased demand for new GPUs and capable mining hardware.
One of the key factors when calculating the profitability of mining is the cost of power in your region and how much power your system will require to produce a certain amount of any given cryptocurrency. This means that any reduction in power consumption that does not affect mining performance will offer miners an increase in profitability.
This had moved dedicated mining hardware in a specific direction, creating motherboards that can handle larger numbers of GPUs so that a minimal amount of excess hardware is utilised to field the maximum number of GPUs.

ASUS has now entered the mining arena with their B250 Expert Mining motherboard, which is capable of using up to a record number of GPUs on a single board. A total of 19 GPUs can be used on this motherboard, allowing this single board to take the place of what would traditionally be three different mining systems.

This means that only one CPU, SSD and memory DIMM is required instead of three of each, making a mining setup cheaper to create and cheaper to run. 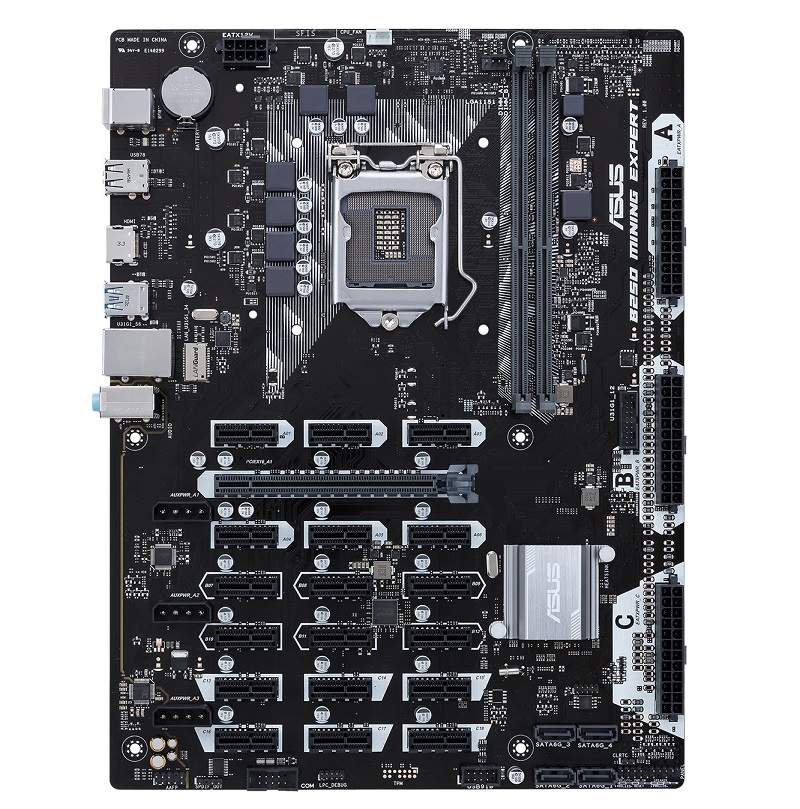 One of the key additions on ASUS' B250 Mining Expert board is its ability to utilise three 24-pin power connections, allowing 3 PSUs to be directly connected to your motherboard. This allows all three PSUs to be turned on at once and minimises any unstable power delivery when your mining system boots, no jump-starting secondary PSUs or damage to components due to unstable power.

AMD has promised a new GPU driver that will allow additional GPUs, though this driver is not expected until later this year. 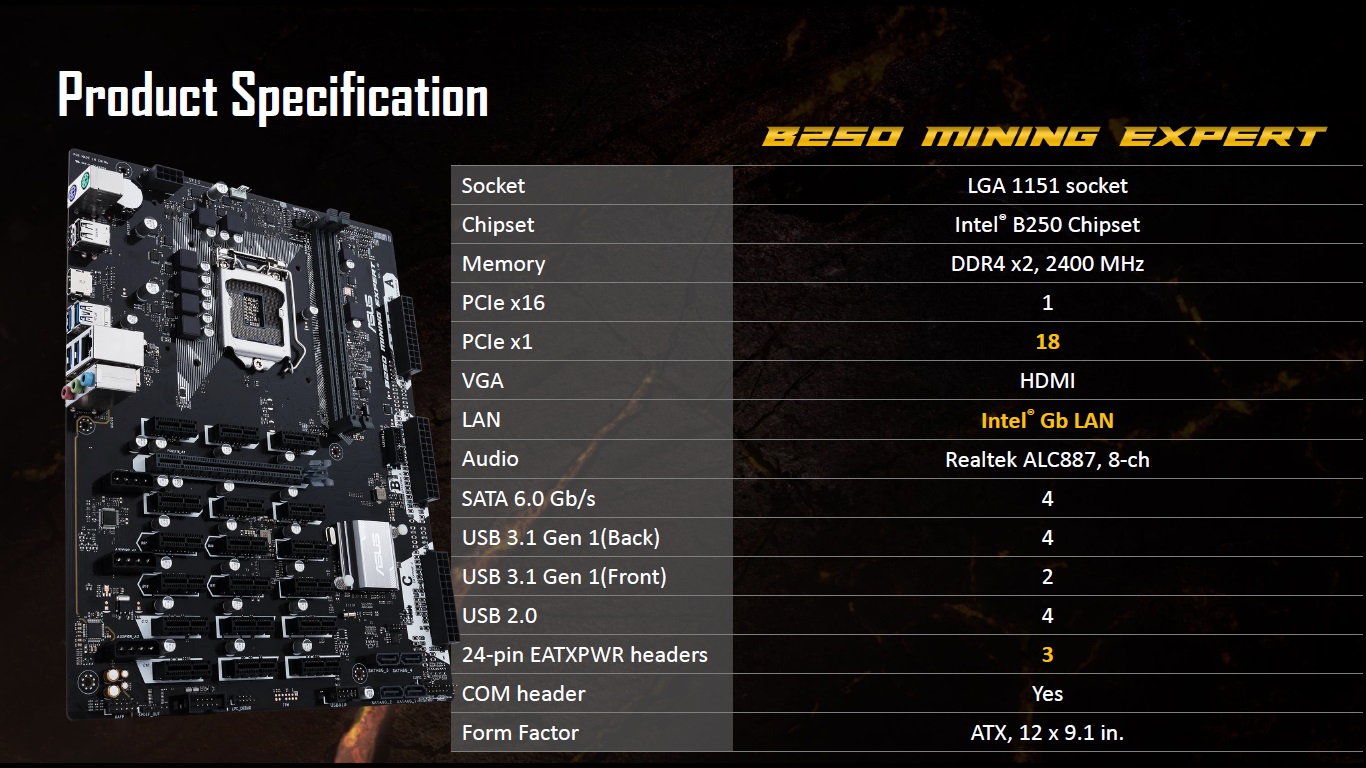 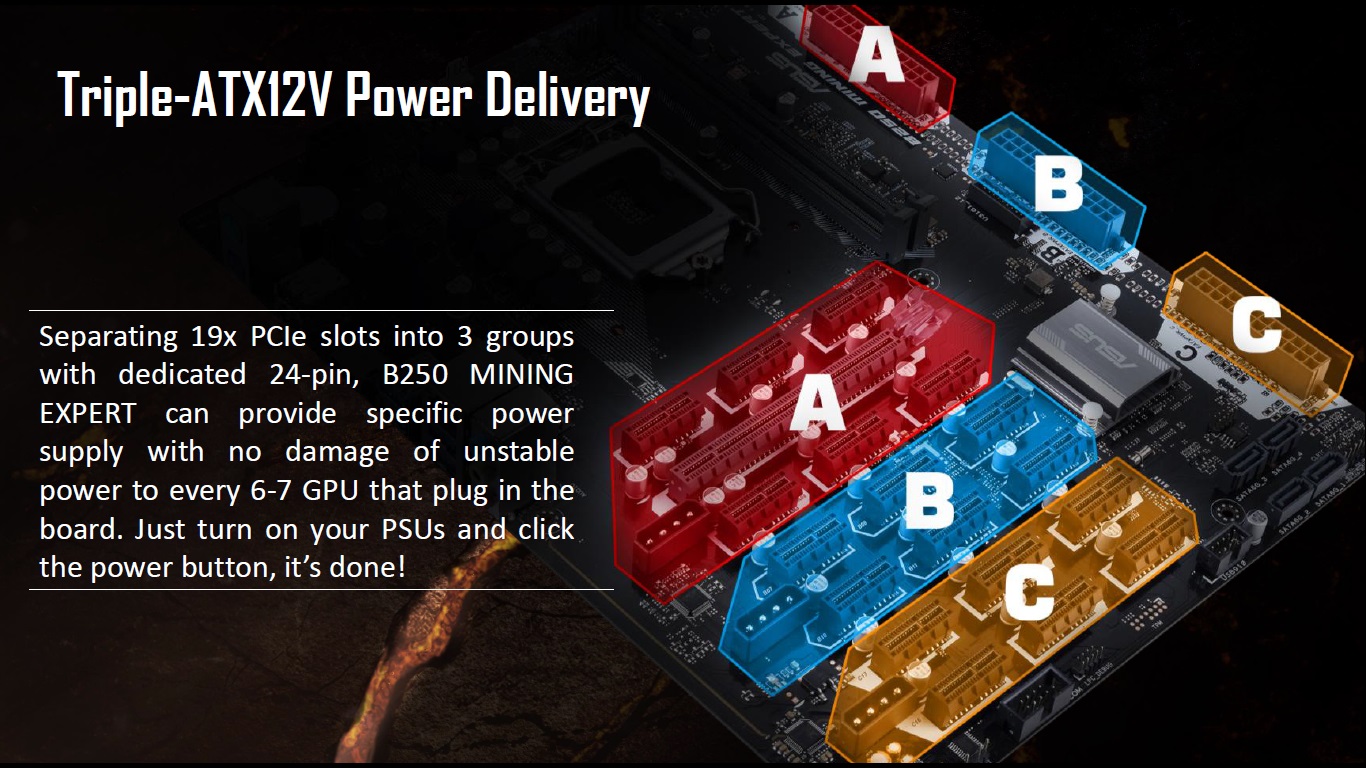 You can join the discussion on ASUS' B250 Mining Expert motherboard on the OC3D Forums.

grec
For the time being is there anything stopping people from using two virtual machines with direct PCIe passthrough of 8 GPUs each? Will have a bit more overhead than it could but a lot less than the overhead of 2 extra systems.Quote

Gothmoth
i hope that so many new cryptocurrencys are developed that people get sick of this nonsense.

maybe i will try to sell my pupic hair as currency.
i shave anyway... so i only need enough people to see value in it.....Quote

Dawelio
Quote:
Haha, this is just so bad and inappropriate that I actually found it so damn funny

AlienALX
I shave mine too (sorry, but it's more fun to talk about than mining).Quote