Intel's Z590 motherboards are not going to be cheap. The addition of PCIe 4.0 and a wide range of other platform upgrades have called for higher-cost components, chipsets and other add-ons. New features have their price, and it looks like ASUS will not have a Z590 motherboard that costs less than €189.

ASUS DE has revealed the European pricing of their Z590 motherboard lineup, the platform which will act as the backbone of Intel's 11th Generation Rocket Lake processor lineup. High-end motherboard models will feature WIFI 6E, Thunderbolt 4 support, USB 3.2 Gen 2x2 ports and plenty of PCIe 4.0 connectivity. Add on options like liquid cooling, and we have motherboards that can cost more than $1,500.

High-end PC building is becoming a costly hobby, though it is worth remembering that you need not spend more than €1000 to have a great CPU and motherboard. 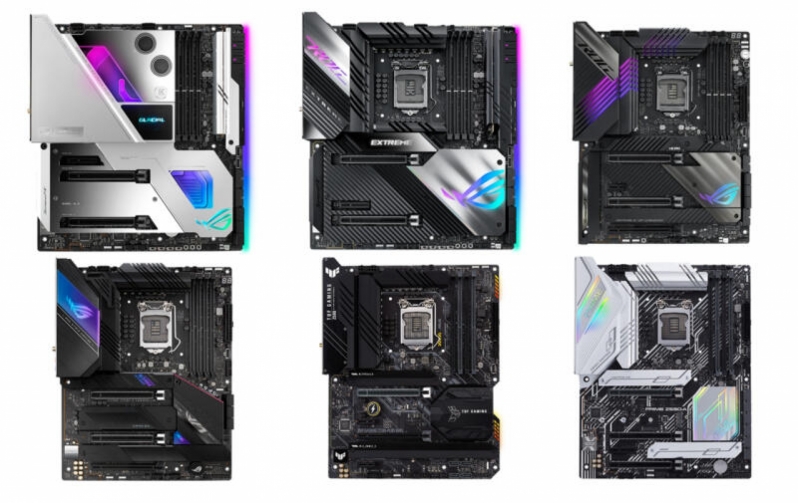 You can join the discussion on ASUS' ROG TUF and Prime Z590 pricing structure on the OC3D Forums.

Bagpuss
Milk those idiot consumers for all they're worth!!!Quote

Tom Sunday
Quote:
Milking...that is the unfortunate truth of the matter. And the consumers cannot really do anything about that. Asus knows that monies will somehow be found and forked over by the consumers (enthusiasts) to keep on buying their motherboards. Overpriced or not.

Actually Asus has two generations of mobo's entering the market this year. Alder Lake a so called all new architecture is slated to reach the consumers later in the fall for another round of even more impossible mobo prices. (DDR5, PCIe5, 20 Cores, 10nm SuperFin and LGA1700) So Asus can double-dip this year and clean-up again! Paying $550 for a Z490 Maximus XII Extreme when it first came out is now a pipe dream. And it was a crazy price to pay then.

The big question is now to either wait for 'Alder Lake $$$ shock' or fly a short-lived generation affair with the Intel Rocket? I am the man on the street with very shallow pockets, so I will stick with my 12-year old Dell XPS 730x. Then see the Mumbai boys at their strip center PC store for a used crypto miner 980ti advertised for $75. That is more my speed and allowing me to play Metro Exodus and meet the Aurora crew at Novosibirsk station. Life is good.Quote

Tom Sunday
Quote:
I hope that you had better luck! Hanging around the local strip center PC shop recently I found that many were looking to snatch Z490 Asus mobos on sale, now that the very expensive Z590's have been announced. But the word was that ASUS Prime, Hero and many of the Strix lineup all maintain to have (Ethernet) LAN issues. Many Amazon buyers in their frustration purchased separate PCIe Ethernet cards to get online and for a quick fix. I checked Amazon across their entire Asus Z490 series offering and found lots (24) of LAN issues to be the case.

Supposedly Asus has introduced a reissue of the boards with an actual LAN hardware replacement? Previous Bios updates and hours playing with new and old drivers never worked. Asus tech service is dancing around the issue. But Amazon as late as this past December is still issuing RMA's and selling these boards with no fixes. Looks like many such boards are still on the shelves with these problems. How do I differentiate a 'Hero' board which apparently has the Lan fix on-board? For curiosity I checked Gigabyte at Amazon and found none of these LAN issues among the certified buyers. I have been using Asus mobos for a very long time but now...what's the scoop? WTF!Quote
Reply