ASUS reveals PCIe 4.0 support for much of their X470 range of motherboards

Some models boast PCIe 4.0 connectivity, others are stuck with 3.0.

ASUS reveals PCIe 4.0 support for much of their X470 range of motherboards 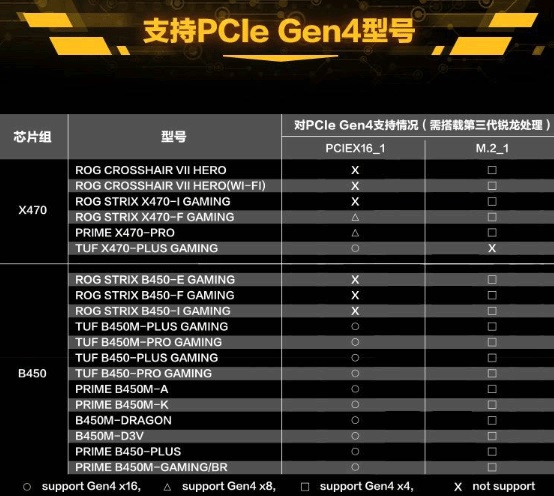 So what does this mean? Well, it means that users of many of ASUS' 400-series AM4 motherboards can support PCIe 4.0 in specific circumstances, which is great news for those who wish to upgrade their PCs with a Ryzen 3rd Generation processor.

You can join the discussion on ASUS' 400-series AM4 motherboards offering limited support for PCIe 4.0 on the OC3D Forums.

Gothmoth
i read that correct? the cheaper boards support PCI 4.0 on the fist PCI slot while the expensive ones do not?Quote

demonking
Doesn't this kind of contradict everything we have been told previously on how PCI-e 4 needed additional hardware that was not in use for PCI-e 3 and that the chipsets would need cooling to manage the additional load on the chipset?
And that this was the justification for the additional price (extra layers needed in the PCB to support the additional connections and more expensive chipset)?
I mean a crosshair 7 is around the 270 to 300 price where as a crosshair 8 is 400.
Something is not right here, admittedly a bonus for anyone on the x470 but if you have bought a x570 because everyone involved told you that you had to if you wanted PCI-e 4 (AMD, board manufacturers, reviewers ect) is kind of misleading and possibly liable.
https://www.anandtech.com/show/14477/amd-confirms-pcie-4-not-coming-to-older-motherboardsQuote

Avet
Quote:
The prominent issue is signal integrity. You can see that m.2 slots are just below the CPU. They are very close and, as stated in the article, those are primary m.2 slots with CPU lanes. Also with PCIe x16 slot, only boards that don't support SLI/CF have some support for PCIe 4.0. Again, they have only one PCIe slot that is connected to CPU. Boards that have lane dividers (a bunch of those square chips that you see between PCIe slots) and support for SLI/CF, in this case, higher-end boards, don't support PCIe 4.0. The second slot is very far from the CPU, and lane dividers don't support PCIe 4.0. That why you need better-built PCBs, and different components. ITX boards have extremely densely packed PCBs, with traces going all around everywhere so I assume it is too noisy to keep adequate signal integrity for PCIe 4.0, hence no support.

PCH has nothing to do with support on x470 boards because support is related only to CPU lanes.

If you know very basic stuff about PCIe lanes, and how stuff is organized on the motherboard it is very logical and makes sense.

If there are any engineers there please correct me if I am wrong.Quote

demonking
Quote:
Hey, Not doubting this is possible the article even mentions that there should be no reason why those that have over engineered their PCI-e interface cannot.
Doubting as to why a Robert Hallcock of AMD tells the world if you want PCI-e 4 on any of its chips you have to buy an x570 and then Asus come out and say this was not true.

Quote:
Watch TTL's own review on the Ryzen 3 chips where he talks about how x570 is going to be more expensive and how this is justified. or GN or J2C or any other reviewQuote

Gothmoth
intel will push to PCI 5.0 just to give amd the finger.

when i NEED PCI 4.0 in the future i will probably buy another mainboard anyway.... or PCI 5.0 will be the new standard.Quote
Reply