BIOS Flashback is a vital part of this new series, as this will allow users of ASUS' latest B450 designs to support an extensive range of Ryzen processors, from today's Zen 2 powered Ryzen 3000 series chips to AMD's earliest Ryzen offerings. ASUS claims that their 256Mb firmware chips were selected "with an eye towards future upgrades". This reference to "future upgrades" likely refers to AMD's planned Zen 3 processors.

With their B450 II series, ASUS has revealed six new motherboard designs. None of these motherboard support PCIe 4.0 connectivity. 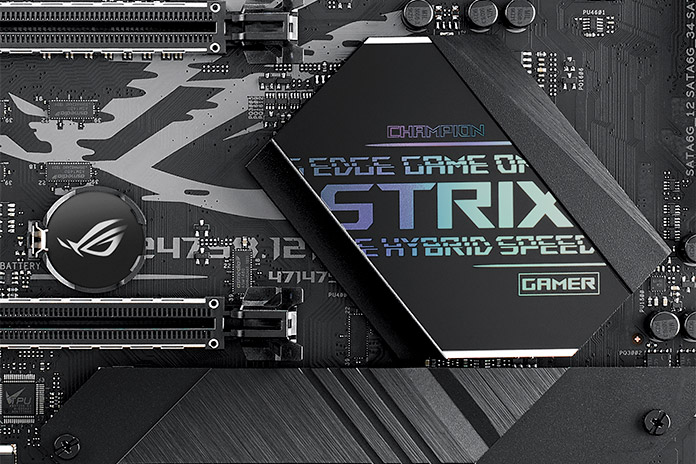 AMD’s Socket AM4 platform accommodates PC builders of all stripes. Those who need the latest connectivity and features can choose an X570 or B550 motherboard to enable the next-gen PCI Express 4.0 interconnect for the graphics cards and storage devices. Not every PC builder needs to be on the cutting edge, though, and the attainable B450 platform is tailor-made for systems where value is the most important consideration. We’re boosting the bang-for-the-buck of this platform with a refreshed family of ASUS B450 motherboards.

Going with one of our refreshed B450 boards for the foundation of your build gives you more flexibility in how you allocate resources in your next Ryzen system. You might be able to choose a faster processor, a boosted graphics card, a bigger, future-proof power supply, or quieter, more robust CPU cooling. The latest Ryzen 3000-series processors will be right at home in our buffed-up B450 boards, and you can still install first- and second-generation Ryzen CPUs in these boards if need be.

Every refreshed B450 board now includes our handy BIOS FlashBack feature for easy firmware upgrades without a CPU, and we use high-capacity firmware chips across the lineup for the broadest possible Ryzen CPU support. Most of our refreshed boards have been fitted with upgraded power delivery and cooling, extra M.2 slots, and an improved selection of 10Gbps USB 3.2 Gen 2 ports, USB-C connectors, and USB 3.2 Gen 1 front-panel headers.

Modern connectivity teams up with modern style in this lineup thanks to extra RGB LED headers on select models, including Gen 2 addressable connectors. Models in the Strix and TUF Gaming range can deploy our AI noise-canceling microphone utility for clear and crisp voice comms during video calls, streaming, and recording. Our Armoury Crate system-management tool is available across the entire lineup and lets you configure Aura Sync lighting and system parameters in one handy utility.

From ROG Strix to Prime, there’s a new B450 board that’s right for every build. This refresh benefits almost every member of our existing B450 range. We’ve outlined the upgrades and highlights for B450 newcomers below.

The main theme for our B450 refresh may be about maximizing bang-for-the-buck, but that doesn’t stop us from delivering a healthy dose of substance and style in an ROG Strix board. Strix models deliver plenty of niceties derived from our range-topping ROG line, including reinforced power delivery and cooling, top-grade networking and peripheral connectivity, and enhanced audio with SupremeFX codecs and dedicated signal PCB layers.

We’re starting this upgrade bonanza with the top dog: the ROG Strix B450-F Gaming II. This enthusiast- and wallet-friendly board gets quite the generational boost. Starting from the literal top, the VRM on the B450-F Gaming II now uses a sturdy 8+4 discrete MOSFET layout. The individual VRM components are sandwiched between an improved heatsink with high-grade thermal pads and a new backplate that’s an integral part of the power-delivery cooling stack. 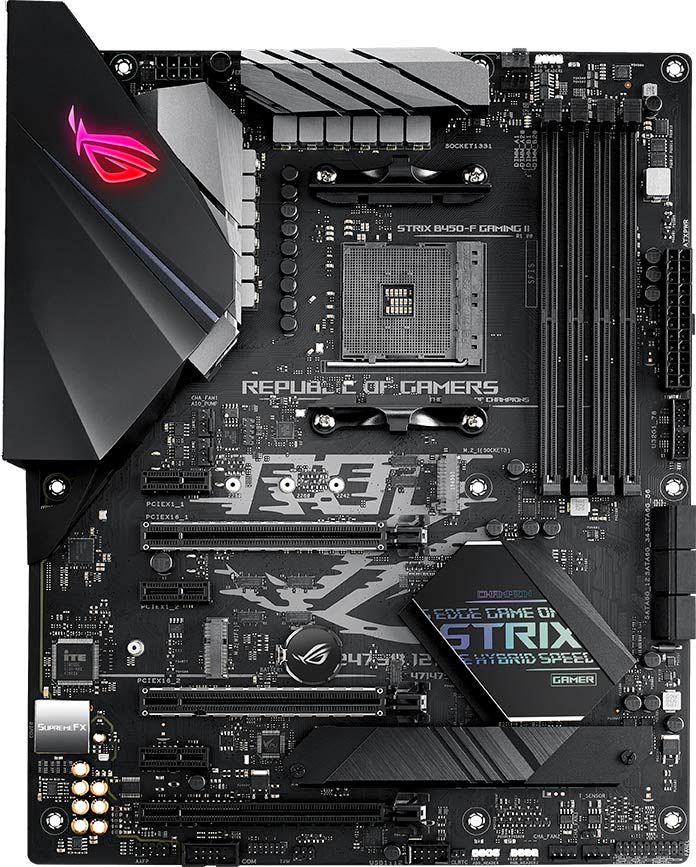 The four memory slots next to the CPU socket can take in up to 128GB of RAM and overclock compatible sticks to speeds reaching 4400MHz, while two M.2 sockets allow for plenty of solid-state storage and even NVMe RAID arrays if you’re so inclined. The main M.2 socket now boasts an aluminum heatsink to keep speedy SSDs from getting too toasty. While this board doesn’t include built-in Wi-Fi connectivity, we do include a handy E-key M.2 socket for an easy Wi-Fi 6 networking upgrade.

The rear panel includes a carefully considered combo of eight USB ports. Two 10Gbps USB 3.2 Gen 2 Type-A connectors deliver high speeds to the latest peripherals, and a USB 3.2 Gen 1 Type-C port makes it easy to hook up and charge modern devices. One USB port handles BIOS FlashBack™ duties, allowing for a firmware upgrade or reflash with nothing more than a PSU and a USB thumb drive.

The B450-F Gaming II is quite a looker, too. Its shadowy PCB is enhanced by cybertext motifs and bright accents atop the I/O shield and chipset heatsink. Black and gray are both excellent base colors for additional lighting. You can hook up lighting devices to two standard RGB LED strip headers, plus an addressable header with low latency functionality and configuration presets. Our AI noise-canceling microphone software efficiently cuts down your microphone’s background chatter in office meetings, online classes, and games.

The TUF Gaming line of motherboards blends substantial specs with rigorous reliability and rugged styling. They employ military-grade chokes and capacitors for reliable and undergo extensive testing to ensure they won’t let you down under intense action.

This engineering approach extends to details like LANGuard electrostatic discharge protection for network ports, SafeSlot reinforcements, and carefully planned power and cooling designs. With our B450 refresh, we opted to enhance our trio of already-TUF boards with TurboLAN traffic shaping and AI noise-cancelling microphone software.

The TUF Gaming B450-Plus II is built for action

The TUF Gaming B450-Plus II and its black-and-yellow battle stripes are raring to head into the field. Enlarged heatsinks rest atop an upgraded 8+2 discrete MOSFET VRM that can easily wrangle higher-end Ryzen chips without breaking a sweat. 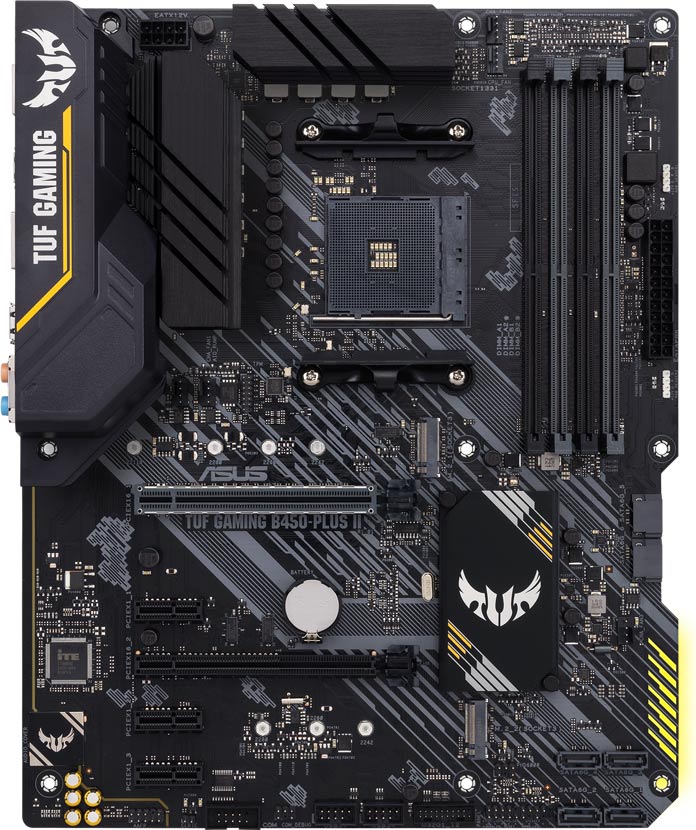 The storage subsystem on this full-size ATX board now includes an extra M.2 socket, allowing you to install two swift SSDs, and the enhanced port cluster now hosts a USB 3.2 Gen 2 Type-C connector to go with its Type-A twin.

Gamers on a budget or builders who don’t need dedicated graphics cards might use a Ryzen APU with Vega integrated graphics in this board. To upgrade their experience, we added a DisplayPort output to hook up to the latest displays with high resolutions and refresh rates. Two RGB LED strip headers stand ready to extend TUF Gaming style to the rest of a build.

The TUF Gaming B450M-Pro II is one mighty mouse

Compact PC builders who still need room for expansion will want to check out a microATX motherboard like the TUF Gaming B450M-Pro II. This model is a close cousin of the ATX TUF Gaming B450-Plus II above. Like its stablemate, this board’s port selection has been upgraded with a DisplayPort output, USB 3.2 Gen 2 Type-C and Type-A connectors, and additional USB 3.2 Gen 1 ports. 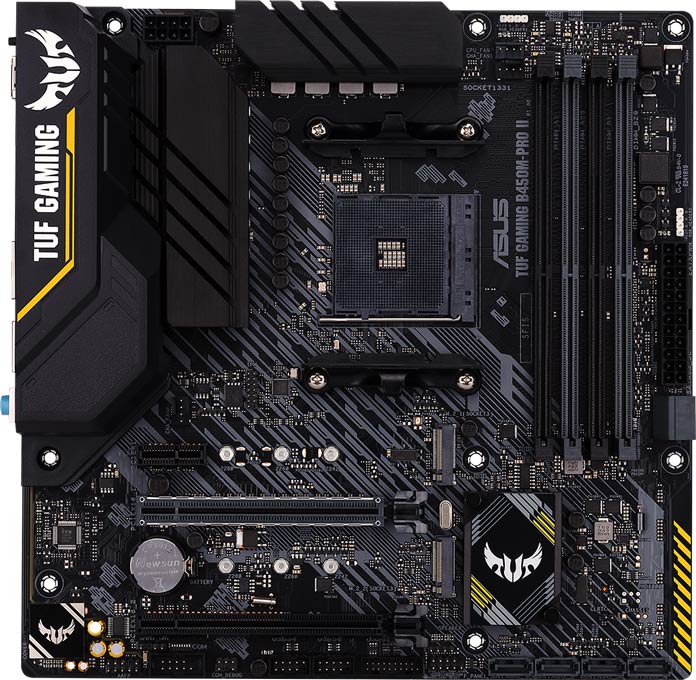 This board’s TUF Gaming DNA extends to a pair of PCIe 3.0 x16 slots, one of which is strengthened by a SafeSlot metal sheath. Sizeable heatsinks atop the VRM keep things chilly even under heavy CPU loads. A quartet of DIMM slots can clock up compatible DDR4 sticks to 4400MHz, and you can install as much as 128GB of RAM if your build demands it. Two M.2 slots make plenty of room for swift PCIe SSDs, too.

The TUF Gaming B450M-Plus II strips down to the essentials

The trimmed-down but rock-steady TUF Gaming B450M-Plus II completes the refreshed TUF Gaming B450 trifecta. This board is the ideal option for folks with two words in mind: “value” and “reliability.” 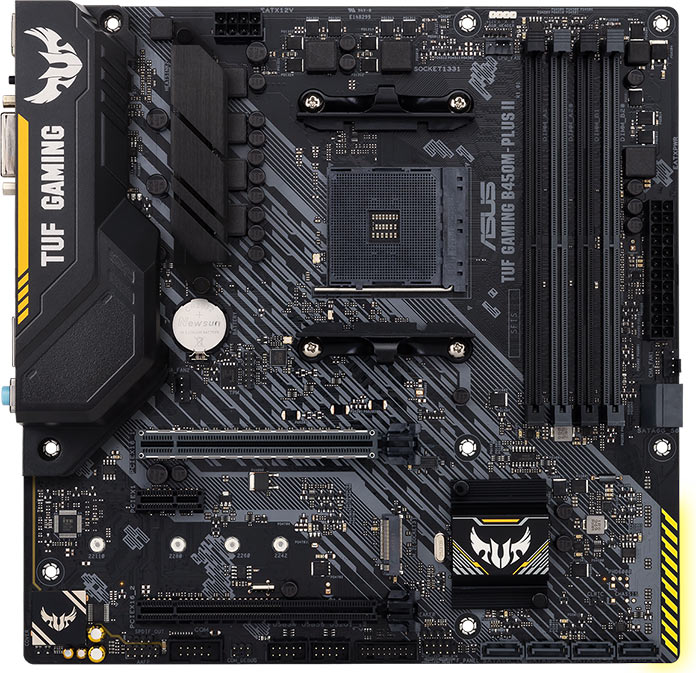 This board trims the fat, but that doesn’t mean the cuts went to the bone. The main PCIe x16 slot, strengthened with our SafeSlot tech, stands ready for even the heaviest graphics cards, while an M.2 socket linked to four PCIe 3.0 lanes keeps the data moving from NVMe SSDs. An RGB LED header allows for visual customization in conjunction with Aura Sync support.

Despite its lean-and-mean mantra, the TUF Gaming B450M-Plus II still supports an abundance of handy software features. First and foremost, this board supports BIOS FlashBack™ for hassle-free firmware updates. You can also take advantage of AI noise-canceling microphone software for clear communication at all times, and Turbo LAN traffic shaping tools prioritize your gaming packets for the lowest ping. You’ll also have a one-stop view of your system’s status and customization thanks to Armoury Crate.

Refreshed Prime motherboards get down to business

The careful construction and reserved styling of our refreshed Prime B450 boards make them ideal for straightforward workstations, office machines, or budget gaming stations. These models may not be flashy, but they’re crafted with the high quality and attention to detail that infuses our entire refreshed B450 lineup.

The Prime B450M-A II’s compact dimensions and understated aesthetics are backed up with comprehensive functionality. The primary phases of the VRM flanking the AM4 socket now rest under a heatsink for reliable operation with a broad range of Ryzen CPUs. Four DIMM slots take in up to 128GB of DDR4 memory, and the M.2 socket is complemented by six SATA connectors for versatile storage configurations. 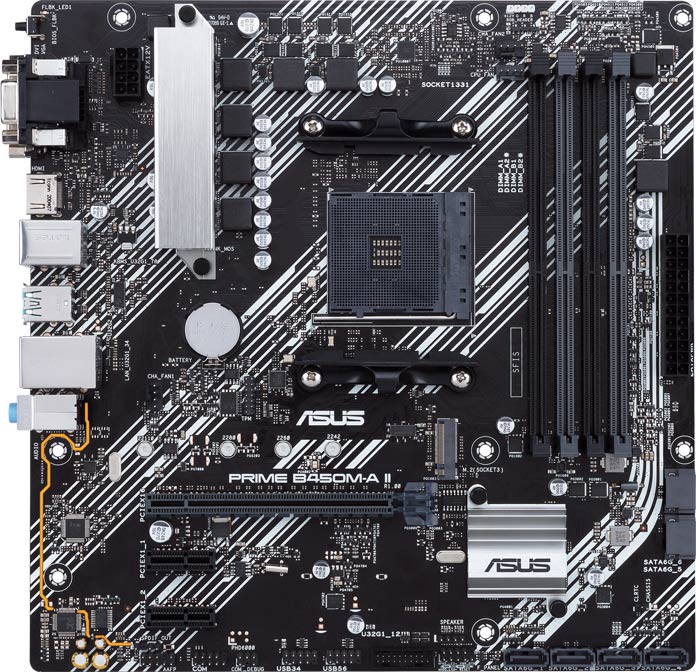 The back panel boasts upgraded USB 3.2 Gen 2 ports for 10Gbps transfers, and there’s a USB 3.2 Gen 1 header for fast front-panel connectivity. BIOS FlashBack™ makes both building around and maintaining this board a snap. Like its companions, the B450M-A II hosts a 256Mb firmware chip with an eye toward future upgrades and broad CPU support.

The Prime B450M-K II is a straightforward Ryzen foundation

The Prime B450M-K II sticks to the very essentials to deliver a straightforward, reliable motherboard. Budget-friendly productivity builds, home theater PCs, or even cost-conscious gaming rigs can all benefit from this model’s simplicity and affordability. 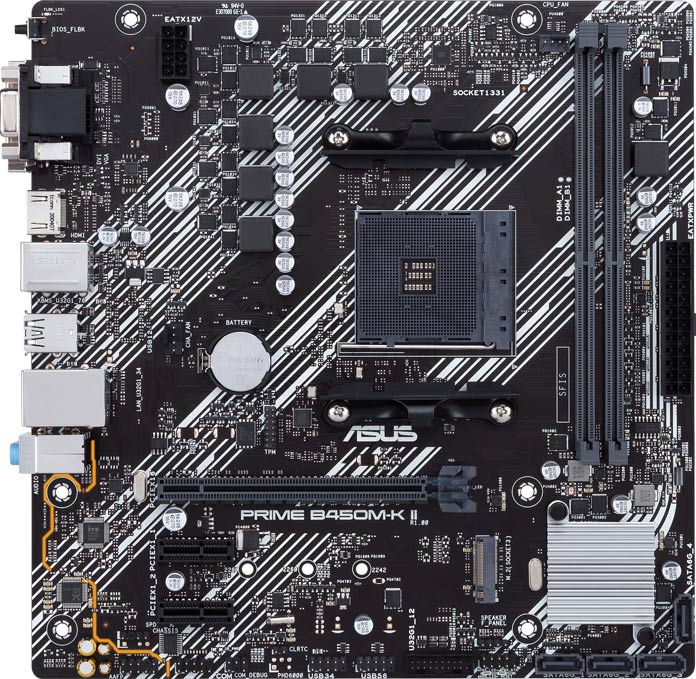 Although it’s the most humble model in the range, it still carries a quality Digi+ VRM to power entry-level and midrange Ryzen CPUs. A total of 64GB of RAM can go into this board’s two slots, and the main PCIe slot has SafeSlot Core structural reinforcement. One M.2 storage device can be augmented with four more SATA ports.

You can join the discussion on ASUS' "future-proof" B450 II series motherboard on the OC3D Forums.