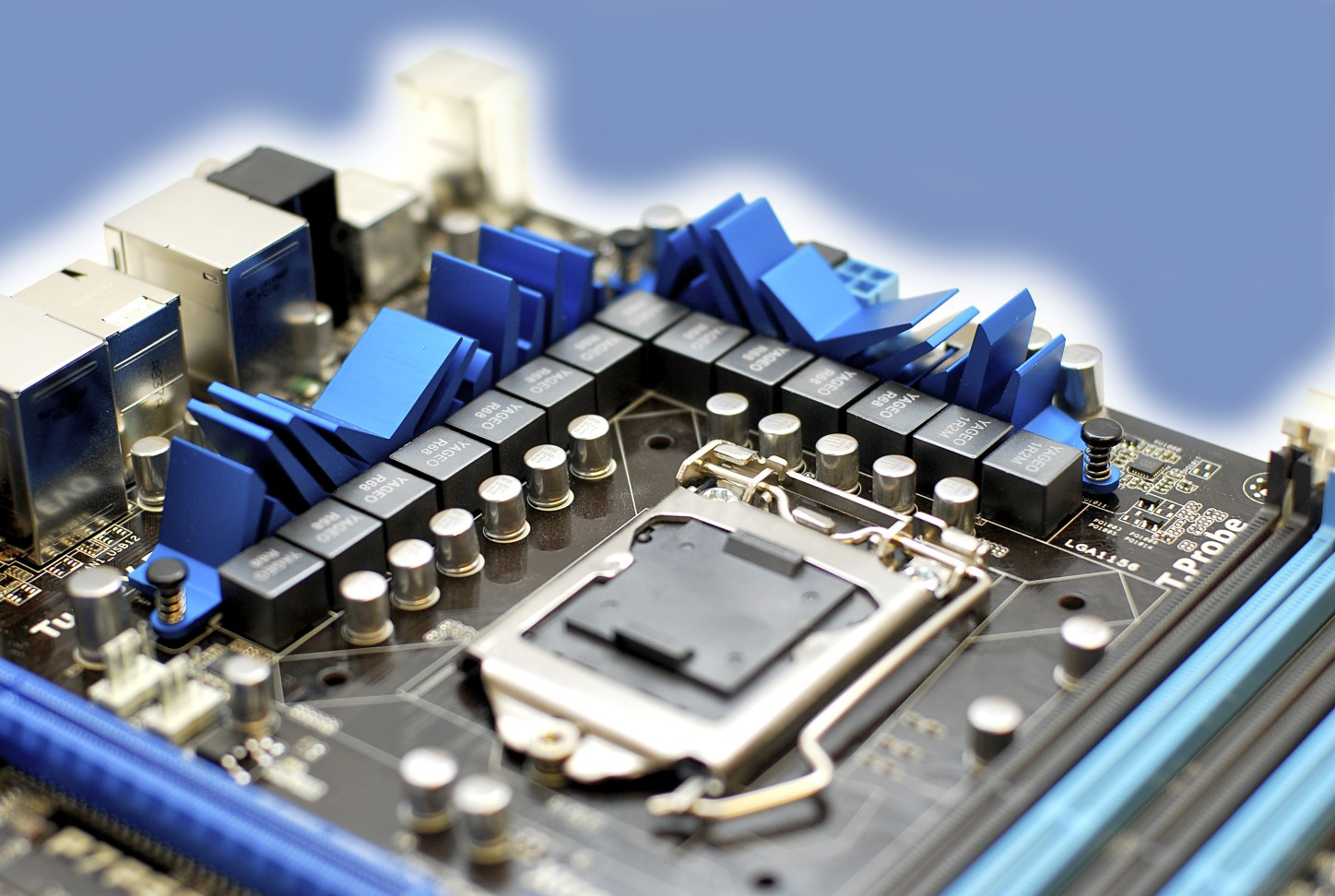 P55 (code name Ibex Peak) is just around the corner but thanks to our friends at Asus, they have given us a sneak preview of their P7P55D 'EVO' motherboard based on Intels LGA1156 socket designed for Intel Lynnfield Processors or Core i5 to you and me. As the socket type suggests, Core i5 will need a different socket type and will not work with current X58 motherboards as the architecture is quite different from Core i7 as we will see later in the review. I'm not sure this is the best move for Intel as it will inevitably prevent cross platform upgrading but we will reserve judgement on performance until we put the new processors and chipset through their paces.
Intel have been busying themselves with a new line up of CPU's to complement the already successful Intel Core i7. These new processors will be called Intel Core i5 (mid-level) and Core i3 (entry level) for the desktop using the 45nm process. This is in addition of  the mobile revision of the Core i7 (Clarksfield). This is not to say that the Pentium (basic) and Celeron (value) brands will be finally brushed aside nor will the Atom processor which will still be used for netbooks and smartphones, rather the 'Core' name will be reserved for the best Intel currently has to offer.
Missing from P55 is the QPI bus (Quick Path Interconnect), still lovingly referred to as the Northbridge, which will likely have a detrimental effect on performance compared to the i7/X58 chipset. Also missing is triple channel DDR3, replaced instead by dual channel DDR3 supporting a maximum 16GB which, if you have read our article on the benefits of 3GB vs 6GB vs 12GB is no big deal and the increase in performance triple channel currently offers over dual could be written on the back of a postage stamp so there's no great shakes there.
I was however intrigued to learn that the P55 chipset will restrict the bandwidth of PCI express to 8 lanes if you intend on using a dual card set. While this is the same as it's P45 brethren I would have appreciated an upgrade in this department. Not that it will concern anyone apart from those lucky enough to be running dual GPU cards such as the 4870x2 or GTX295. If you are just using one card though then the full benefits of PCIe 2.0 are available. Information regarding SLI compatibility is sketchy at present but you can be assured that Crossfire will at least work on P55, much the same as P45.
Specification
Before we take a sneak preview of the Asus P55 Evo motherboard let's take a peek at it's specification which, is subject to change being that it is a very early sample:
As the specification above suggests, this is going to be one feature packed motherboard and with a massive 14 possible USB ports, the ultra in connectivity. I was interested to see that Asus are not including their Xonar sound package with the board, instead relying on VIA to provide your Aural pleasure.
That's enough spiel for the time being, time to take a look at the motherboard itself...
«Prev 1 2 Next»

VonBlade
The board looks nice.

Still unconvinced that yet another new socket is the way to go. Hmmm.

Be better when we've a little more information about it's performance. Right now it looks like a needless budget item (Core2 still rocks the cheap stuff, 920s aren't that expensive).Quote

Mul.
Personally, I'm very confident about the i5 platform. With LGA775 a soon to be discontinued socket, people like myself are less keen to take this route and with AMD offering comparable performance from Celeron 430 to Core 2 Quad Q9650 level and a range of motherboards at very good prices, it'd be great from a DIY customer perspective to see this platform appear asap.

To me, P55/LGA1156 has a lot of potential. By cutting Triple Channel Support, reducing PCI-Express lanes, presumably lower power regulation requirements and a single unified MCP style chipset, the build cost of these motherboards should be considerably lower than X58 and nearer to AMD's 790GX chipset. P55 motherboards ranging from £75 to £150 would hit the spot quite nicely. The i5 CPU's themselves are very much like i7 architecturally and I would expect performance to be quite similar. I'm sure that this will steal AMD's Phenom II thunder.

The P7P55D looks like a well thought out motherboard. The board layout appears very well spaced out and has a good combination of PCI and PCI-E slots. It's pricing that I'm keen to hear about

Socks
hmmm...makes me think of waiting to buy a new board...looks really nice. I do hope they do some more work on the overall look, the heatsinks i suppose is the only thing that worries me. Especially with some overly large heatsinks.

Looks interesting, shall be nice to see some clocks...Quote

Rastalovich
Apart from feeling that Intel are eFFing us all with these socket differences..

We gonna get a different socket for i3 also ? They seeing people using the E pentium ranges in higher end 775 boards and getting close to fantastic results and seeing it as a reason they're not requiring to buy the more expensive core 2 cpus. Nipping that in the bud.

ASUS's memory slot with 1 clip will be seen as "something nice", ofc it sounds like u hook the memory in one end and rotate it down, the kinda thing u can do with existing 2 clips if ur being clever. What a load of rot, harping back to ASUS throwing their mobo designs together, they needed to move the slots up some mm - ?? I dunno. U reckon they've put a reinforcing slip of plastic behind the pins to prevent bending if used frequently ? mfm style connectors are ofc meant to be pushed in evenly.

VIA sound is interesting. Just as I'm appreciating Realtek's ALC889a being a very good audio set, it'd be interesting to see what VIA have to say.

Proof of this mobo's pudding is going to be the performance, or what the "P" used to stand for, perhaps we'll see.

SATA-III will be nice, it's interesting that USB3 hasn't been rushed through, but even so, i7 SSD owners are gonna feel like they've been bent-over cos of this. Perhaps a new i7 range will come out. ASUS generally make 50 mobos for one range anyway

Personally nice to see that the mobo is warped almost as much as the one I was worried about previously. Kinda self satisfying.

Without a very good reason not to be, I still think Intel are eFFing us with this range - not performance wize or anything, but in terms of choice and financially in terms of what u may have to buy at have-to buy prices.

775 I feel still has a heck of a long time to serve, as long as u can source the cpus. Asrock mobos are out there, but they don't appear to be the solid types that come out right at the downturn of a chipset. But ofc the time will come, and still they could be coming with the x68 by then. Perhaps the x58 cpus will fit in them ??

What a mess, and well-done to AMD ! http://forum.overclock3d.net/picture...&pictureid=153

Looking forward to the DATA releases even so, as I have a strong feeling that, like the i7, all the mobos from the other manufacturers are going to relate in a very very similar way performance wize.Quote

w3bbo
Gotta say I agree with some of your points. I think it's a big nono to restrict the upgrade path (or downgrade as it were).

I''m quite happy I have i7. The only reason I would want i5 is for SATA3. Other than that I cannot see a reason why anyone would want to change. Obviously I cant go into performance details but I think it's safe to assume the bandwidth will favour the tripple channel i7 to the dual i5. Then there's the PCIe16x vs PCIe8x.

AFAIK both i5 and i3 CPU's will work with P55. i7 is more expensive to produce and as such may have prevented lot of people from upgrading. i5 is theoretically cheaper so should tempt more people away from skt775 but one has to wonder at the logic behind tempting people to upgrade but in a half assed manner as they are still restricted in upgrade path from there.

It remains to be seen if these cheaper to produce prices are passed down to the consumer. I fear if they are not then intel just blasted themselves in the foot with a 12bore shotgun.Quote
Reply