Right now not much is known about AMD's Ryzen 3 series of CPU, apart from the fact that they will be releasing in the second half of 2017. It is expected that these new APUs will come without SMT (AMD Hyperthreading) technology and ship with 4 cores and 4 threads to compete with Intel's i3 lineup.
ASUS has accidentally revealed the specifications for AMD's Ryzen 3 1200 CPU, which is listed as a Quad core CPU with a base clock speed of 3.1GHz, 8MB of cache and a TDP of 65W. These specifications are just below the Ryzen 5 1400, though it is expected that these Ryzen 3 models will not come with 8 total threads.
With the Ryzen 3 name, this CPU is intended as an Intel i3 competitor, coming with overclocking support and 4 CPU cores to compete with the i3's dual-core, 4-threaded lineup. This should give AMD a huge advantage due to its use of 4 true CPU cores. 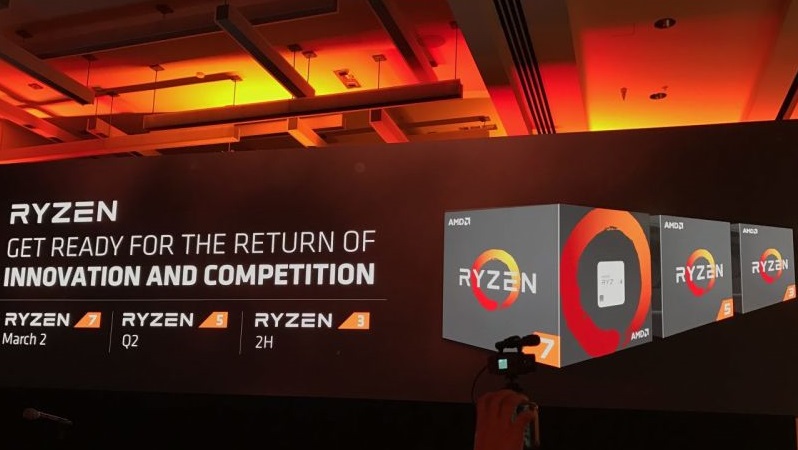 Ryzen 3 is set to release in the second half of 2017, which means that it will release sometime between July and December. It is expected that Ryzen 3 CPUs will be created from 4-core Ryzen APUs or other dedicated 4-core silicon, as the continued use of AMD's 8-core Ryzen silicon would be horrifically inefficient for the production of these low-cost products.

You can join the discussion on ASUS' leak of AMD's R3 1200 specifications on the OC3D Forums.

grec
"It is expected that Ryzen 3 CPUs will be created from 4-core Ryzen APUs or other dedicated 4-core silicon, as the continued use of AMD's 8-core Ryzen silicon would be horrifically inefficient for the production of these low-cost products. "
This seems to be a baseless statement that completely ignores the fact that even now 14nm dies and yields are far from perfect. A Ryzen 3 CPU using the Zeppelin die would generally only have slightly more defects than a Ryzen 5 CPU, and using these defected dies is far more economical than throwing them away. Ryzen 3 CPUs built on Ryzen APUs would need no defects in the CPU area at all, and would need an entirely different CCX layout from Ryzen 5 and therefore different handling in various pieces of software and firmware, and these parts aren't set to hit the desktop till 2018.
While I'm sure there will be CPUs based on Ryzen APU dies, these almost certainly aren't them.Quote

WYP
Quote:
While I do agree that AMD should not be wasting partially faulty dies, it must be remembered that AMD had already stated that they want to release Ryzen APUs in the second half of 2017. Maybe it will not arrive on desktops on 2017, but remember that the mobile versions are typically just low-TDP versions of the same die.

AMD has not spoken much about APUs yet, though it is expected that we will hear more soon as 2H 2017 approaches. Perhaps at AMD's upcoming financial analyst day.Quote

AlienALX
These are going to have to be pretty cheap. It's not just the I3s they are competing against, it's the excellent Kaby Pentium which only costs £60.Quote

WYP
Quote:
Yeah, but a 4-core will easily beat those Kaby Pentiums, as the clocks are fairly low on those.

These prices are just guesses, but I don't think that AMD will go far below i3 pricing.Quote

AlienALX
The clocks on the Pentium are low yeah, but they stand up very well against the I5 etc. I guess it's at that point where "it's enough".

Thing is the clocks on the Ryzen will be pretty low too. Really hoping they actually go above 4ghz but if they don't there won't be an awful lot in it.

Digital Foundry did an article about the Pentium and compared it to the Pentium Anni. Like me they noticed that two cores just stuttered all of the time in demanding games, where as the Pentium was butter smooth. And this is one area of the market where you can actually get a decent priced Intel board too.

Mind you I will be honest, AMD no longer have to make all of their money from this sector, which is quite nice really