The latest beta BIOS for ASUS' AM4 Crosshair VI Hero X370 has added support for AMD's latest AGESA 1006 microcode and support for additional memory multipliers.  This new BIOS adds support for 3466MHz, 3600MHz, 3733MHz, 3866MHz and 4000MHz memory multipliers without the need for BCLK overclocking, as well as give users access to memory sub-timings to help users achieve greater memory performance.
This new BIOS is only in beta and is only available from the ASUS forums, though a non-beta version of this UEFI is expected in the near future.
Thanks to AMD's new AGESA microcode, users have reported much wider memory compatibility, which is allowing Ryzen users to use a larger range of memory kits at their rated speeds. 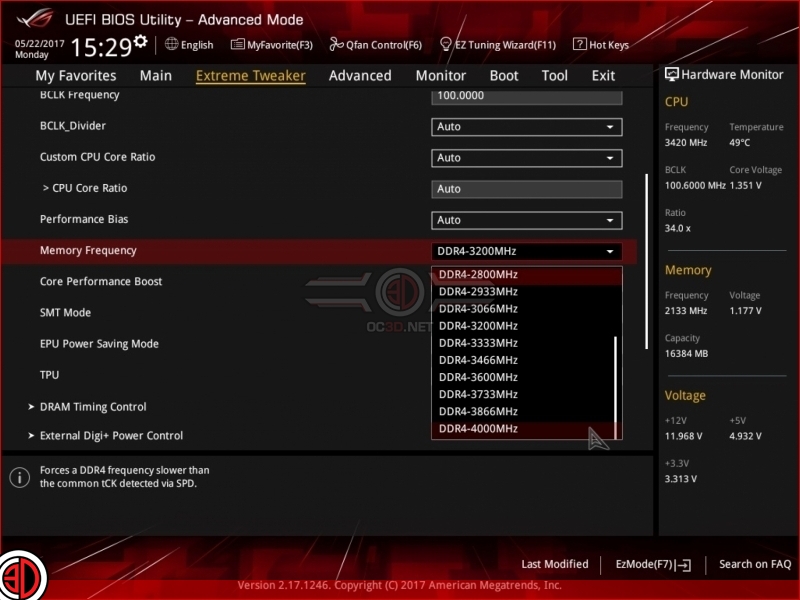 At this time it is unknown if these new memory multipliers were achieved by AGESA version 1006 or by ASUS' own BIOS team, though it is expected that other manufacturers will try to offer similar memory multipliers in the near future.

You can join the discussion on ASUS' latest Crosshair VI Hero BIOS on the OC3D Forums.

Avet
Wow... Was the bios that was released on launch pre alpha? Has anyone tried new memory profiles. I am very interested in scaling performance if the board can actually pull off those memory speeds.Quote

iSaff
Quote:
Lots of people on Reddit claim to have been getting excellent results:

NeverBackDown
Not surprised Asus is first for the BIOS update.Quote

NeverBackDown
Quote:
You noticing improved performance with every update?Quote
Reply