ASRock shares more details about it's "Base Frequency Boost" tech

ASRock shares more details about it's "Base Frequency Boost" tech

ASRock's latest motherboard feature is "Base Frequency Boost", a pseudo-overclocking technique which allows non-K processors to be operated at higher than stock performance levels on both Z-series and B-series Intel motherboards. This feature offers an overclocking-like performance jump on previously non-overclocking processors, delivering end-users a considerable performance bump.

While this isn't overclocking, strictly speaking, it is circumventing the limits placed on Intel's non-K series processors and lower-tier motherboards. Base Frequency Boost will also increase the power draw and heat output of Intel's processors, making this technique similar to standard overclocking mechanisms in terms of impact.

At this time, it is unknown if Intel is allowing its other motherboard partners to utilise similar techniques, or if ASRock has pioneered this technique. Regardless, this is great news for Intel users, at it brings higher performance levels to lower-cost hardware and the effects of overclocking without as much risk.

AMD currently provides its customers overclocking support on both its B-series chipsets and higher-end X-series motherboards, as well as all Ryzen series desktop processors. This is something that Intel has not matched thus far, which is a factor that makes ASRock's Base Frequency Boost technology all the more exciting.

Below, ASRock has confirmed that Base Frequency Boost is available on selected 300-series and 400-series Intel B and Z series motherboards.

** BFB frequency performance results may vary between different CPUs, hardware configurations and motherboard VRM design. Frequency shown in this chart is for reference only. 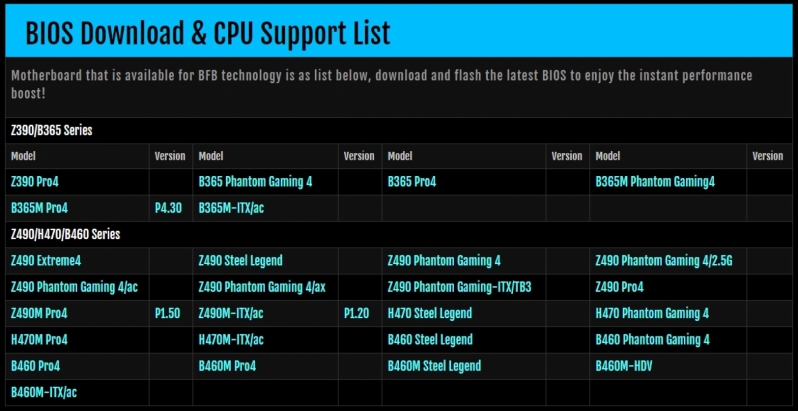 You can join the discussion on ASRock's Base Frequency Boost technology on the OC3D Forums.