Is this really overclocking?

Over on the Twitter account for ASRock Japan, the company has announced a new technology which the company plans to apply to Intel's upcoming 10th generation processors, bringing a form of overclocking to Intel's non-K processors and non-Z series motherboards.

While this isn't overclocking, strictly speaking, it is circumventing the limits placed on Intel's non-K series processors and lower-tier motherboards. Base Frequency Boost will also increase the power draw and heat output of Intel's processors, making this technique similar to standard overclocking mechanisms in terms of impact.

At this time, it is unknown if Intel is allowing its other motherboard partners to utilise similar techniques, or if ASRock has pioneered this technique. Regardless, this is great news for Intel users, at it brings higher performance levels to lower-cost hardware and the effects of overclocking without as much risk.

AMD currently provides its customers overclocking support on both its B-series chipsets and higher-end X-series motherboards, as well as all Ryzen series desktop processors. This is something that Intel has not matched thus far, which is a factor that makes ASRock's Base Freqnuecy Boost technology all the more exciting.

At this time, Intel has not officially revealed its lower-end 400-series chipsets. Expect to hear more about ASRock's Base Frequency Boost technology as more information is revealed. 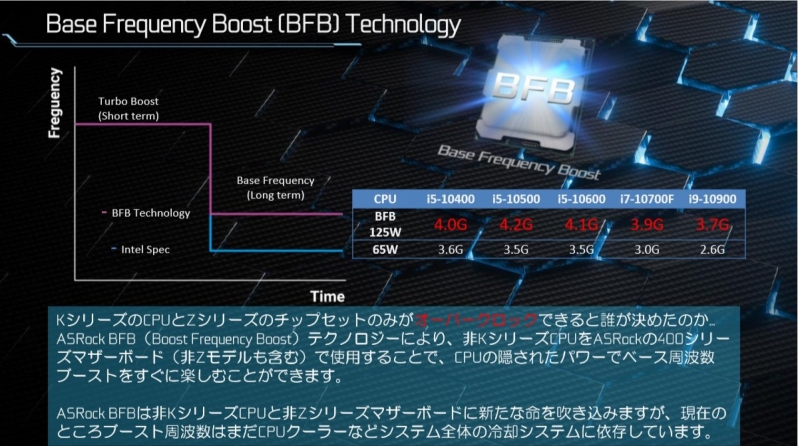 You can join the discussion on ASRock's Base Frequency Boost Technology on the OC3D Forums.

demonking
This is not new its something they are bringing back
I am using a z77 Asrock extreme 4 board with a non K 3770 and it is overclocked to 4.1ghz. It won't go any higher than that due to artificial locks by intel and did not feature in future chipsets as it caused conflicts in Intel's product stack.Quote
Reply