One of the joys of seeing technology evolve is seeing the technology of yesteryear fit into increasingly tight spaces. PCs once occupied entire rooms, and now they can fit into the palm of our hand.

This is one of the factors that makes the Mini ITX form factor inherently fascinating, as with every passing hardware generation we can see increasingly powerful hardware fit into this form factor, but when it comes the large socket processors, you can bet that this will come with compromises.

ASRock Rack has launched two new ITX motherboards which fit into the ITX form factor, the EPC621D4I-2M and the EPC621D6I, both of which utilise Intel's C621 socket and can utilise Intel's LGA 3647 Xeon Scalable 1st and 2nd Generation processors.

Momomo_us, created the image below to show us what the ASRock Rack EPC621D6I would look like, utilising two bottom-mounted SODIMM slots to connect the motherboard's 5th and 6th memory channels. These images are modified versions of what is included in Serve the Home's ASRock Rack EPC621D4I-M2 review. 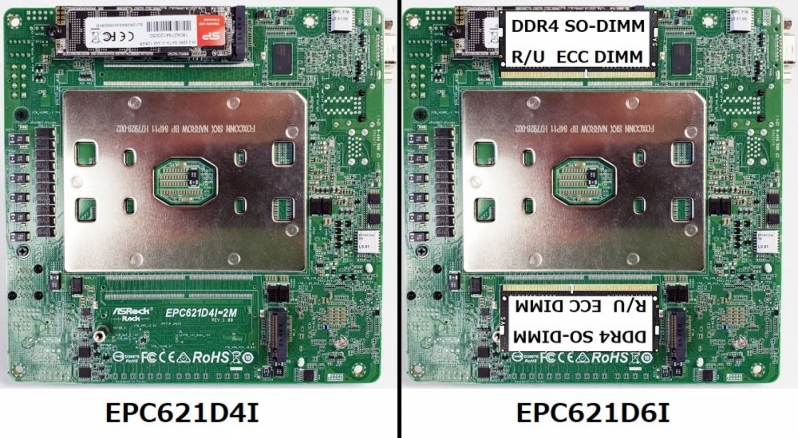 (Image from Momomo_us, via Serve The Home)

ASRock Rack has managed to fit up to 28 cores and six memory channels into a Mini ITX motherboard, an insane achievement that at a minimum deserves respect, though it is worth noting that the board is limited to CPUs with a 205W TDP. That said, we doubt that ASRock has a consumer version of this motherboard planned for Intel's overclockable Xeon W-3175X, as placing such a heavy power/thermal load into the MITX form factor is a disaster waiting to happen.

You can join the discussion on ASRock Rack fitting LGA 3647 and six memory channels onto a Mini ITX motherboard on the OC3D Forums.