Ready to pack an 8-core processor into an ITX form factor?

Aesthetically, ASRock has moved from the black/red design of their X370 Gaming ITX/ac to a grey/black colour scheme, making the motherboard more appealing for use with RGB lighting or a stealth-themed PC build. Aside from some changes in component placement, that Gaming ITX/ac looks a lot like its last-generation counterpart, using the same 8-phase power design and a metal reinforced PCIe bracket.

ASRock will be using a single 8-pin EPS power connection to power their X470 Fatal1ty Gaming ITX/ac motherboard, with the company providing a larger VRM heatsink than before which has more surface area for VRM cooling. Sadly this motherboard's top VRMs don't have a heatsink, which could cause issues when overclocking. 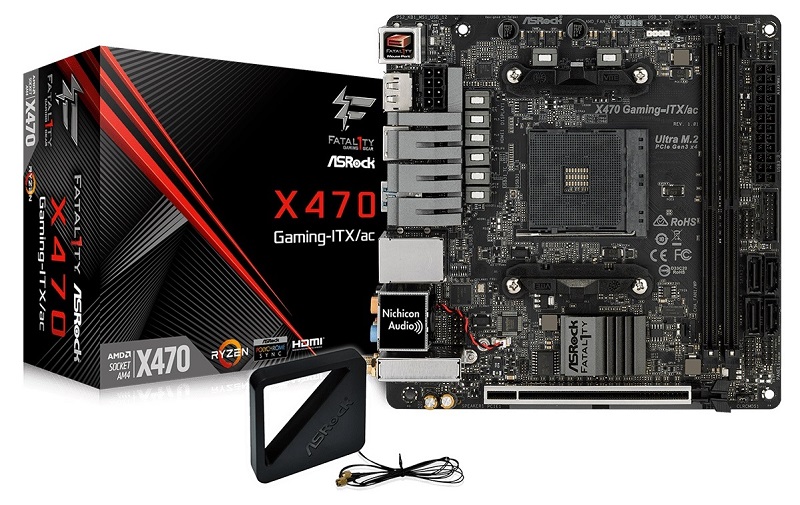 Raven Ridge/APU users will be happy to see that the X470 Fatal1ty Gaming ITX/ac will come with DisplayPort and HDMI display outputs, allowing integrated GPUs to be used with this motherboard. As an X470 design, this motherboard supports all Ryzen 2nd Generation processors out of the box.

You can join the discussion on ASRock's new X470 Fatal1ty Gaming ITX/ac motherboard on the OC3D Forums.

AlienALX
Wow they finally removed the red. Good call IMO. Only thing I would like to see on there that isn't is steel memory covers. Only cause I think it looks nice.Quote

Dawelio
Quote:
The red was the indication colour of/for "Fatal1ty".Quote

AlienALX
Quote:
That was something Wendel came up with 15 years ago or more. It's time for a change. Remember, these boards are made for him and his spec etc so I would imagine he either doesn't game any more (and has just sold the rights to his nickname) or he doesn't like red and black any more.

Whatever happened it really needed to. It's a much more saleable board now.Quote
Reply