ASRock has stated on Twitter that Intel's upcoming Coffee Lake series of CPUs will not be supported by Intel's current generation 200-series motherboards, laying to rest rumours that Kaby-Lake users will have a seamless upgrade option.
Until now leaks for Coffee Lake have suggested that an LGA 1151 socket would be used, the same socket that Intel uses for Skylake and Kaby Lake on desktop platforms. Now it seems that new motherboards and perhaps a new socket will be required to support Intel's upcoming Coffee Lake CPUs. 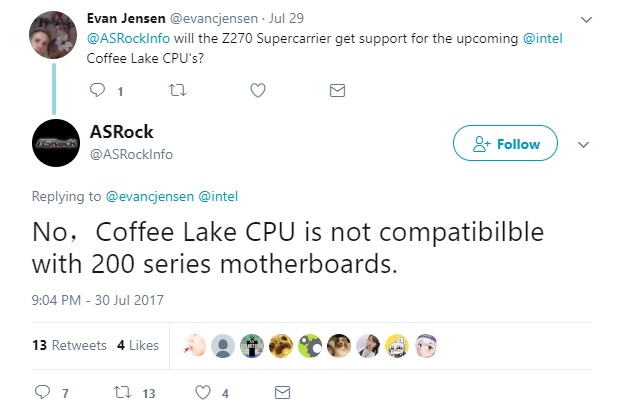 With Coffee Lake being rumoured to release before the end of 2017, it looks like Intel's current generation 200-series/Kaky Lake platform will be released and replaced within a year, a move that will no doubt annoy Intel fans.

You can join the discussion on Coffee Lake requiring a new generation of motherboards on the OC3D Forums.

Dawelio
Quote:
^ This right here. Nothing more but a real d*ck move by Intel really.Quote

Well, when my 6700K will be aging, I'll definitely go for AMD CPUs.Quote

Fetchez La Vache
I'm guessing this was the bomb Tom was going to drop.Quote

NeverBackDown
Not surprised at all. What did you expect from themQuote