Every generation has its crazy motherboards, from the EVGA SRII series motherboards that were used to overclock dual Xeon systems to the overbuilt pro-overclocking motherboards that are overkill in almost every sense of the word.
ASRock has revealed a new ITX motherboard with a design that is so small and features rich that its designers need a big pat on the back (and likely a straight jacket) after completing such a mind-bending project. Meet the X299E-ITX/ac, the craziest ITX motherboard that we have seen to date!

When we first heard that ASRock was working on an ITX X299 motherboard out first thought was about how compromised such a motherboard would be, with ITX designs often limiting the options of high-end desktop platforms drastically, though that does not seem to be the case here.

While this motherboard does not come with support for Kaby Lake-X or full-sized DIMM slots, this motherboard seems to offer everything that X299 users should expect, aside from the ability to use multiple GPUs in SLI or Crossfire of course.

A lot of effort has gone into designing this motherboard, with several design changes being obvious from the start to make do with MITX' small form factor layout. We can see that the board's LGA 2066 socket is rotated 90-degrees to make better use of space and the motherboard has been designed to use SODIMM slots instead of standard DIMM slots to save precious motherboard real estate.

Astoundingly ASRock also states that this motherboard will support quad-channel memory with speeds of up to 4000MHz, which is crazy for a motherboard that uses SODIMM slots. The only problem here will be finding high-speed SODIMM memory, though at least the board is still quad-channel.

ASRock has also been able to deliver three M.2 slots on this motherboard, two on the rear of the board and one on the top of the motherboard on a right-angled extension/daughterboard. This is more full-speed M.2 slots than we have ever seen on an ITX platform, which is a huge achievement for ASRock.

This board also features six SATA 3.0 ports for storage connectivity, which is again a lot for an ITX mainboard, with most standard MITX motherboards coming with only four SATA connections. The X299E-ITX/ac has certainly raised the bar for MITX board designs. 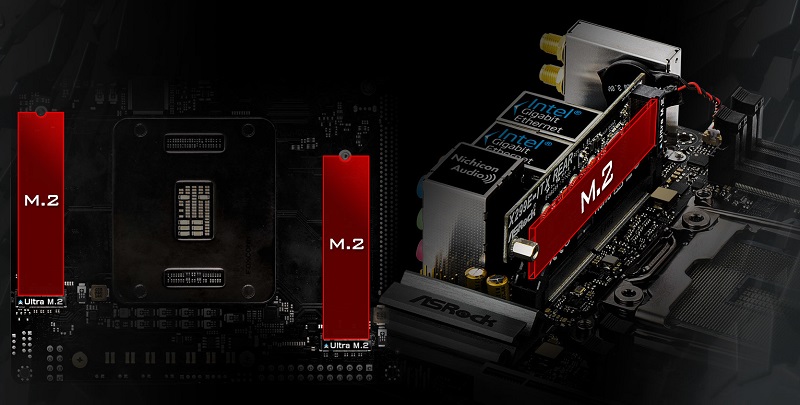 Below this motherboard's SATA slots is a 7-phase power design and a small heatsink. At this time it is unknown how well this heatsink functions under load, though it is expected to be a limiting factor for the motherboard when overclocking. Even so, an X299 CPU on a motherboard this small is an achievement in itself. 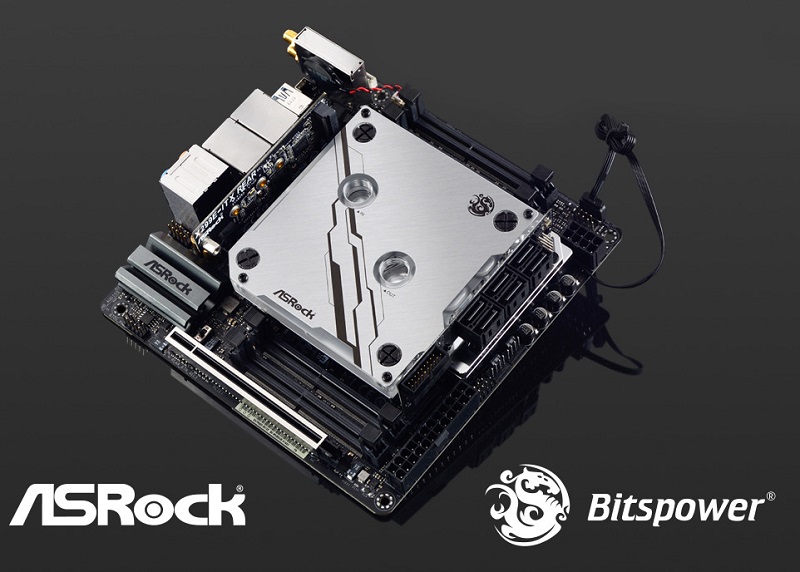 ASRock has also revealed that Bitspower has been collaborating with them to create a water cooling monoblock for this motherboard. This block will cool both the VRM and CPU sections of the motherboard, which could allow this board to offer increased overclocking potential. At this time it is unknown when this mono-block will be released or how much it will cost.

The official pricing of ASRock's X299E-ITX/ac has not been revealed at this time, though more information about it is available on ASRock's website.

You can join the discussion on ASRock's MITX X299E-ITX/ac motherboard on the OC3D Forums.

AlienALX
1. I applaud the clever use of SODIMMs.
2. Where the chuff are the VRMS? lol
3. Asrock are officially craazy.

Ed. Found the VRMs. That block is gorgeous.Quote

Linchpin
This just screams "we did it because we could". Realistically I doubt there is much of a market for this, although the dozen people crazy enough to try cram an HEDT system into this form factor are on cloud nine right now.Quote

AngryGoldfish
Quote:
Yeah, it's definitely a niche market. But like you said, it's fun to see these projects actually come to fruition. And ASRock clearly made enough money on their previous X99 ITX board that they felt the R&D was worth the likely minimal comparative sales.Quote

BloodOfKingu
This board is the definition of MAD GENIUS!Quote
Reply