Arctic cooling has released their new Freezer i32 plus CPU cooler, featuring a push-pull fan configuration but lacks support for AMD's AM4 and older AMD platforms.
This new CPU cooler will cost €49.99 in the EU, with the same cooler coming at £38 in the UK (not including postage costs). This cooler comes with two 120mm fans, both of which are PWM controlled and offer speeds of between 0-135RPM. 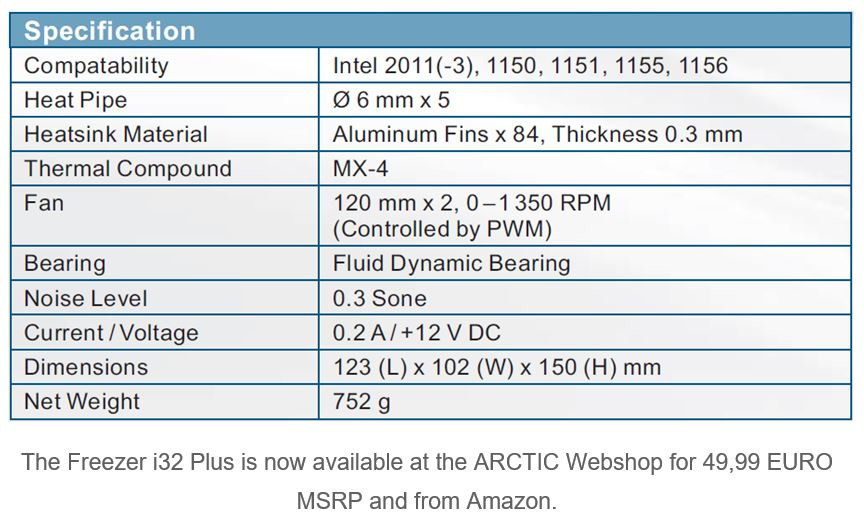 This new cooler is already available on the market in both the UK and EU.

You can join the discussion on Arctic Cooling's Freezer i32 Plus CPU cooler on the OC3D Forums.

Dark NighT
Way to go artic, Am4 is a lot of talk right now and you put a intel only option on it.Quote

AlienALX
TBH I am not sure this would be great for AM4 any way. With lots of cores you need high end AIO or water.Quote

Thelosouvlakia
Don't they make two versions of each cooler one with an i and one with an A? Meaning the i32 gets only intel mounting and the A32 gets only amd mounting.. No harm doneQuote

WYP
Quote:
Yeah, but not everyone will buy the high-en part. There are quad core models after all.

Also, this cooler supports X99, so AM4 shouldn't be out of the question.Quote
Reply