Need more value out of your next CPU purchase? AMD's 'Equipped to Win' Bundle is for you!

With their 3rd Generation of Ryzen processors, AMD has easily created their strongest gaming processors to date, delivering both strong single-threaded performance and immense multi-threading capabilities.

Even with their generational gains to performance, AMD's latest processors are unable to dominate their competitors in the gaming space. Even so, they remain so close that their advantages in other areas will force productivity-focused users to lean towards AMD/Zen's higher thread counts and multi-threaded performance in many workloads.

The two games that make up AMD's "Equipped to Win" bundle include Obsidian's The Outer Worlds and Gearbox' Borderlands 3. Three months of Microsoft's Xbox Game Pass for PC is also included with selected processors. 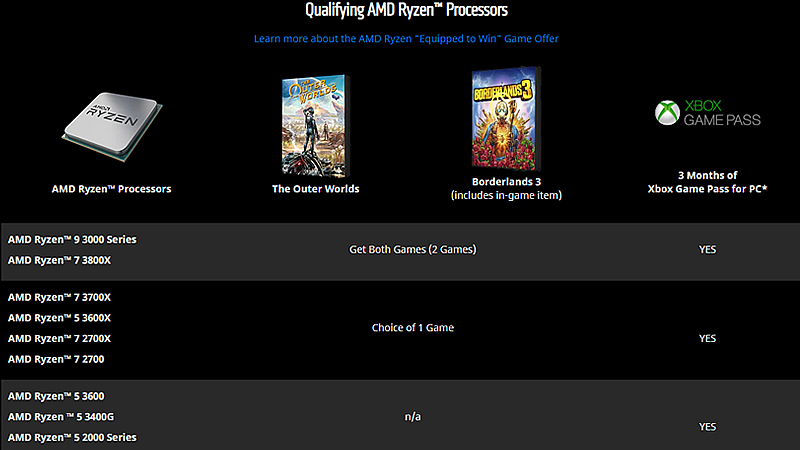 You can join the discussion on AMD's new "Equipped to Win" GPU bundle on the OC3D Forums.

Dark NighT
and i just bought a 3700x.. ouch xDQuote

NeverBackDown
Quote:
Hard to go after any other market when they require a GPU...Quote

OMG.PLS.NO
Two very controversial titles but at least you can sell it on for monies if you dont want it. I see them as £25 off vouchers.Quote

tgrech
Controversial = anything popular when it comes to games nowadays.Quote
Reply