AMD's Ryzen 3rd Generation Threadripper processors are now available, and that means that we can now talk about the architectural changes that have enabled AMD's quantum leap in HEDT performance.

Now before that, we need to explain the design quirks of AMD's older Ryzen Threadripper series processors. While they were single-socket processors, they often didn't act like it. Simply put, AMD's 1st and 2nd generation Threadripper processors were two, or more, Ryzen (AM4/Desktop) processors connected together. This means that while the processor featured quad-channel memory, they were effectively two dual-channel processors that are connected via an Infinity Fabric bridge. The processors PCIe lanes are connected in a similar way, providing each CPU-die unequal memory and I/O access.

While AMD's original Threadripper processors delivered excellent performance at launch, their uneven memory and I/O access was a problem for certain workloads. This prevented Threadripper from acting like a one would expect from a doubled up Ryzen (for AMD's 16-core models). Matters were also made worse with AMD's 24-core and 32-core Threadripper 2970WX and 2990WX models, each of which featured two CPU dies with no direct memory or I/O access. These workloads are where Threadripper 3rd Gen innovates. 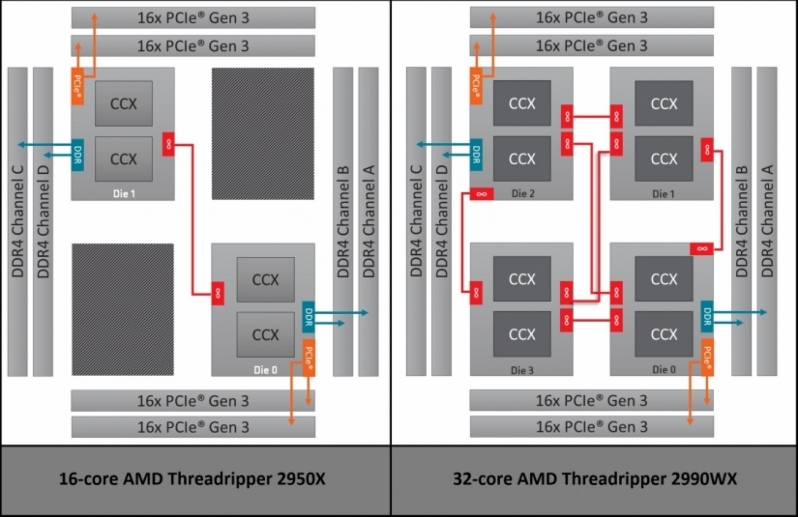 With AMD's Ryzen 3rd Generation processors, AMD revealed their method of scaling up their CPU cores and achieving even memory and I/O access across multiple CPU dies. In short, AMD has created a multi-die architecture that features none of the downsides of AMD's older Threadripper designs.

We have been speaking about this design innovation since Zen 2 was revealed last year, but now AMD has started to talk about this change in-depth, confirming our old hypotheses.

The long and short of it is that Threadripper now features the same I/O design scheme as Ryzen, making Threadripper "BIG Ryzen", rather than "Two Ryzen CPUs bolted together". Basically, AMD has designed Threadripper so that it can act more like a monolithic, single-die, processor than older Threadripper designs. This allows Threadripper 3rd Gen to be faster, act more consistently, and complete workloads more efficiently. 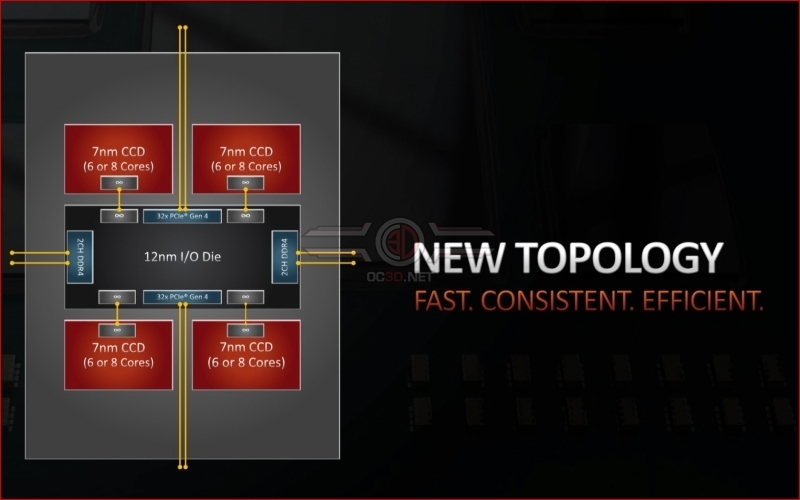 The advantages of AMD's new Threadripper topology are obvious. Threadripper no longer features the downsides of dual-socket systems. Every CPU core now has equal PCIe and DRAM access. This allows Threadripper to act as the "BIG RYZEN" processor it should be, rather than feature the strange kinda dual-socket structure that Threadripper previously featured.

The simple way of putting it is this. AMD's new equal-access Threadripper design ensures that every CPU core in AMD's latest processors can be fully utilised, allowing them to deliver their full performance across a larger number of workloads. Combine this with the benefits of AMD's Zen 2 core architecture and 7nm manufacturing, and AMD's onto a winner with Ryzen 3rd Generation Threadripper. 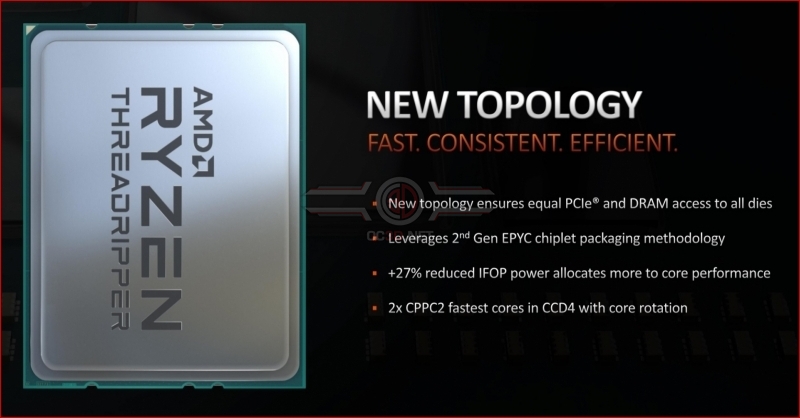 You can join the discussion on the magic behind AMD's Ryzen 3rd Generation Threadripper CPU design on the OC3D Forums.