During AMD's Financial Analyst Day, the company announced their future plans for their Zen series of processors, with plans to release Zen 3 before or during 2020 using GlablaFoundries' 7nm+ manufacturing process.
This is great news as this means that AMD's x86 roadmap extends far beyond Ryzen, though it looks like AMD has plans to release new Ryzen (Zen 1) processors using a refined 14nm+ manufacturing process, perhaps giving AMD similar benefits to what was offered by Intel's Kaby Lake series of CPUs. These new CPU models will likely include improved clock speeds and power efficiency, though other small refinements are possible.
These new 14nm+ Zen CPUs are expected to launch in early 2018, as GlobalFoundries' 7nm process is only expected to reach risk production on mid-2018, which means that Zen 2 will not be ready until at least late 2018/early 2019. These CPUs are expected to be marketed as Ryzen 7 series 1X50 series CPUs, with a Ryzen 7 1850X replacing the R7 1800X, though a 2XXX is also possible. 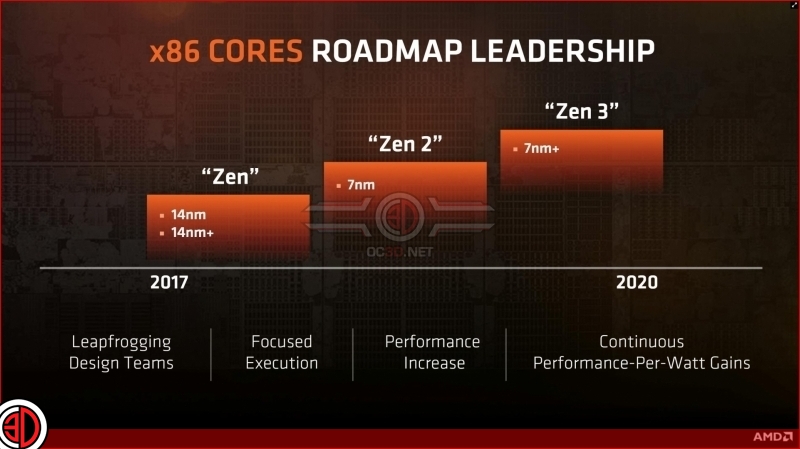 Intel has been able to offer some impressive performance improvements with their new Kaby Lake series of desktop CPUs, which offer increased CPU clock speeds, an improved GPU feature set and the ability to operate with faster DDR4 memory kits. Will AMD be able to offer similar performance benefits with their 14nm+ Zen series CPUs?

You can join the discussion on AMD's 14nm+ Zen CPUs on the OC3D Forums.

Tripp
Quote:
even if it just fixes the silly thermal problem on the x editions its a winnerQuote

Radioman
When you deal with AMD its either Feast or Famine.

After release much of nothing for the better part of the last 15 Years AMD is in the opening stages of a blizzard of announcements.

Now in the next quarter we can expect

The Vega graphics Card
and The release of Epyc (formerly Naples)

before the year is out we can expect

a Ryzen 3
a Threadripper (formerly Winterhaven) for High End Desktops

with a new line of APUs
Ryzen +
and then Ryzen 2

I know AMD has to make up for lost time but isn't this going off the deep end ?

Massive announcements only serve to make the consumer pull back. I know of a number of people that have adopted the strategy of waiting until the dust settles.

Yes business decisions don't wait and it is logical to get the business version of Vega out the door first as well as getting Epyc shipping ASAP. But announcing Ryzen + and Ryzen 2 before they even have one solid quarter of sales figures for Ryzen 5 and Ryzen 7 ? That leaves me scratching my head. Maybe the folks in the AMD Front Office need to brush up on the "Osborne Effect".Quote

NeverBackDown
Think you need to brush up on investors who care about there money.
They need a long term strategy to prove to investors there plan is in place and they aren't wasting money. To inspire confidence in the company so when they deal with other companies it's easier to get better contracts between them due to a lower risk on AMDs side and when dealing with banks they get much lower interest.

It's really not a big deal. They are doing everything right at the momentQuote

iSaff
Intel are a tad vulnerable because of their complacency. AMD have a compelling product, best they maximise the opportunity to increase market share before the competition can respond in the CPU space, and steal what they can in the consumer an professional GPU space. They are a tiny operation compared to Intel and Nvidia, and loss making. They have to go big to build investor confidence in their prospects.Quote
Reply