AMD wants its products to ship to real users, not scalpers

The past few years have seen the PC market go through an unprecedented rate of innovation, with CPU core counts pushing ever higher, SSD storage reach new performance heights and graphics cards gain support for next-generation hardware features while smashing their predecessors in traditional workloads. This trend is especially true in 2020 with the launch of Zen 3, RDNA 2, and Ampere architectures within the space of two months.

With 2020's newest hardware delivering such large performance increases and compelling price points, it has become common for new hardware to quickly sell out at retailers, leaving them unable to satisfy demand. Worse still is the fact that some purchasers are buying this new hardware to quickly resell for profit, taking advantage of those who wish to purchase the latest and greatest gaming hardware.

With their Ryzen 5000 series and Radeon RX 6000 series releasing next month, AMD has reportedly taken action to help prevent their products from being purchased in bulk by scalpers. Red Gaming Tech (via Videocardz) has released an email that AMD has reportedly sent to their retail partners, asking them to take actions against scalpers by hardening their websites against bot purchases while adding purchase limits to eliminate bulk buying.

AMD wants to avoid the mistakes that Nvidia made with their RTX 30 series launch. AMD's RX 6000 series graphics cards are expected to sell out on launch day, as there is a clear demand for new graphics hardware, and Nvidia has been unable to satisfy the market with today's RTX 30 production volumes. 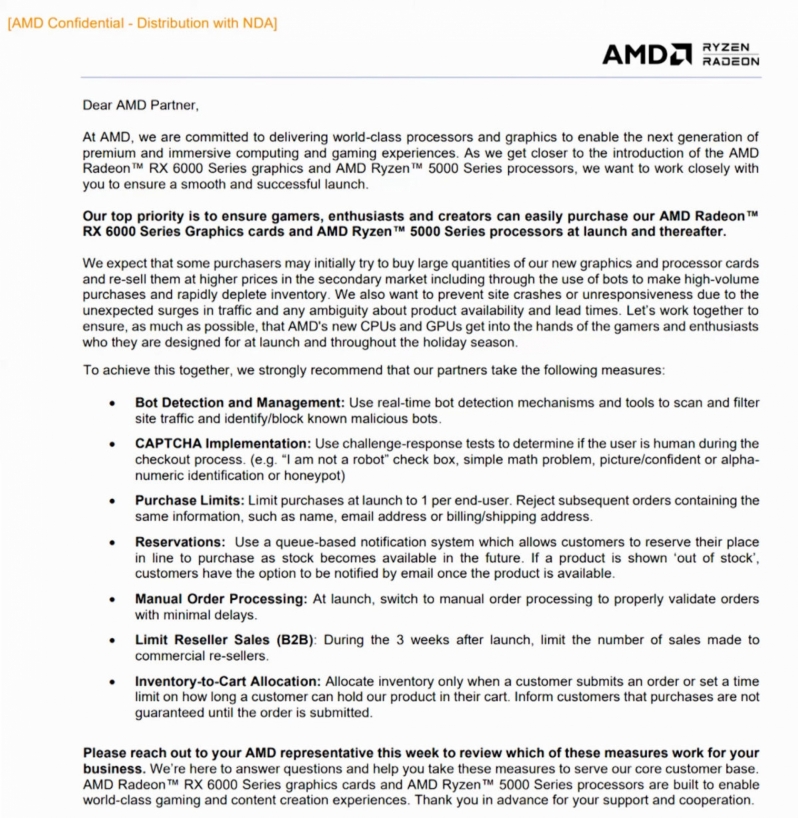 You can join the discussion on AMD's pre-emptive actions against Ryzen 5000 series and RX 6000 series scalpers on the OC3D Forums.

YOUDIEMOFO
Good!!! Here's to hoping for a true launch and not some paper bull with bots on the sidelines taking up all the hardware!!

I am truly hoping that this launch for AMD goes smoothly and the masses can satiate their needs hardware wise...

Competition is needed. The industry needs it.... And we need it as consumers the most. Something to end astronomical price gouging of hardware.Quote
Reply