AMD's Zen will have a "greater than 40%" IPC improvement

AMD's Zen will have a greater than 40% IPC improvement

AMD's Zen will have a "greater than 40%" IPC improvement

AMD has stated that Zen will have a "greater than 40%" IPC improvement, hinting that Zen has performed better than expected. A new CPU design that will "win momentum" in both the commercial and datacenter markets.

Back when AMD had reportedly finished testing on their new Zen CPUs core designs several months ago, an insider said that the design had "Met All Expectations" with no "Significant Bottlenecks", meaning that AMD's Zen CPUs should be as competitive with Intel as AMD had set out to be. 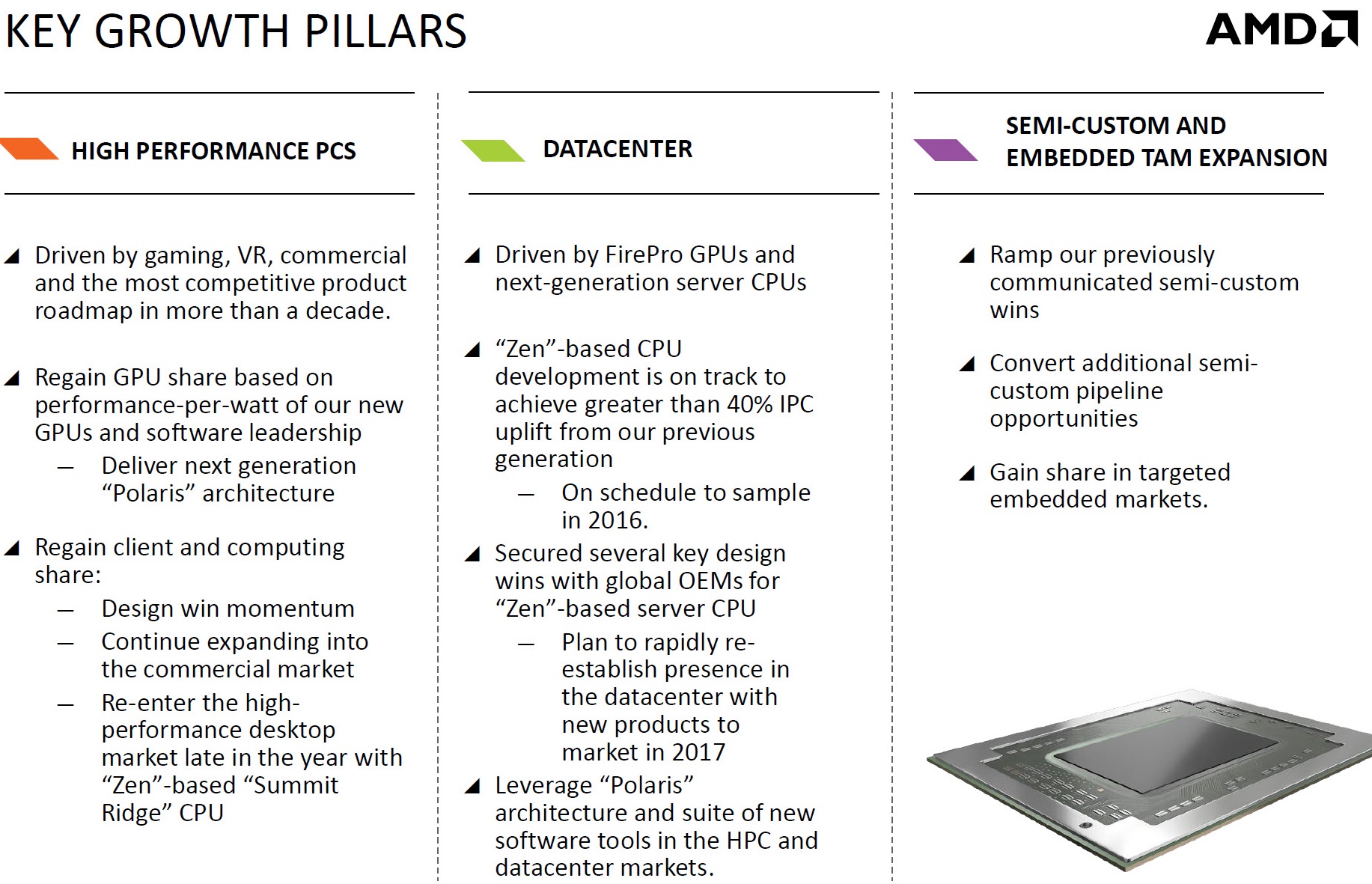 The source from the real world tech forums has word from a former AMD employee, who still has connections inside to company has said that AMD is yet to finalize the clocks and TDPs of of what retail units but that the server market is "very excited" about the upcoming launch.

AMD's AM4 platform will launch later this year and it will be a unified platform for both AMD CPUs and APUs, allowing AMD's future users to easily transition from one CPU to another without changing their motherboard.

For years APUs and CPUs from AMD have been using different CPU sockets and motherboards, which makes transitioning between platforms difficult. This move will allow AMD users to move easily from CPU to CPU, especially when moving from low end to high end CPUs. This also allows AMD to have a single Unified series of motherboards for both platforms too, which should give motherboard manufacturers to have more time to work on each motherboards design and BIOS.

AMD's AM4 platform and their Zen CPUs were first expected to be coming in late 2016, but now rumors are suggesting that AMD AM4 motherboards will be coming as soon as march 2016, with the first CPUs being the Excavator based Bristol Ridge of products. 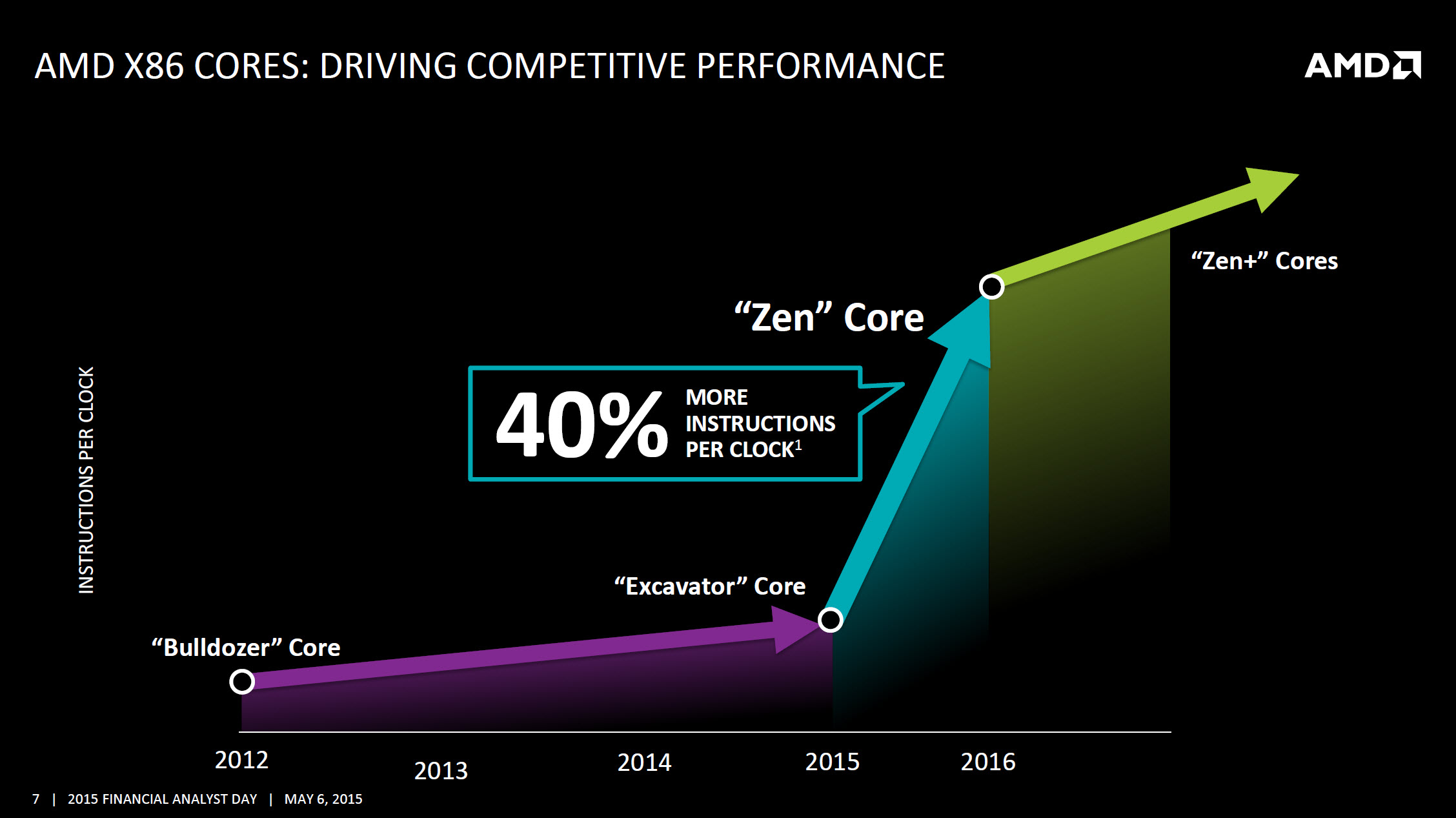 AMD's Zen CPUs will be based on the 14nm FinFET process and from the CPU block designs that we have seen (below) AMD will be focusing on Zen's per core CPU performance, rather than focusing on delivering more, but limited, CPU cores than their previous Bulldozer designs.

Rather than iterating on the AMD Bulldozer CMT design, AMD has returned to a single fetch, single decode design. This means that AMD is focusing on a single more powerful CPU in it's CPU block rather than 2 weaker CPU parts that share resources. As we can see below AMD will be widening the Integer Pipeline of Zen by 50% compared to excavator and will be replacing the dual 128-bit Floating point schedulers with dual 256-bit schedulers, which together should allow AMD's new cores to have dramatically better integer and floating point performance per CPU core, especially as the CPU's Floating point units no longer feed two CPU cores. 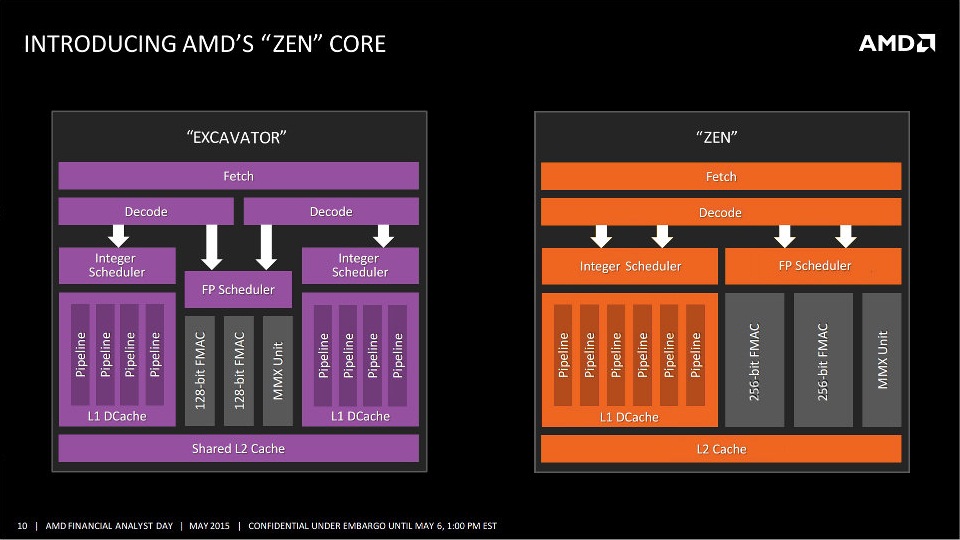 One important thing to note is that AMD's Zen CPUs have been said to have over a 40% increase in IPC over Excavator, a CPU core design that we have yet to see in the consumer desktop market, meaning that we honestly have no real Idea how much more powerful it will be than their current generation desktop Kaveri/Steamroller or Piledriver CPUs.

AMD's Zen CPUs will debut later this year with Summit Ridge, which will come with the new AM4 socket and with DDR4 support, which should hopefully bring AMD back into the races against Intel who have been rather relaxed when it comes to CPU performance improvement year on year, focusing more on mobile and other low power applications rather than increasing their IPC/ per core performance.

Unifying AMD's future desktop CPU and APU platforms is no doubt a great thing for consumers, allowing us to have a much easier time when moving from one CPU to another. Hopefully AMD will be using their new AM4 socket over several future generation of products, from Zen to Zen + and possibly beyond, though that will require AMD to have a very competitive feature set which will include M.2 and U.2 support as well as USB 3.1.

You can join the discussion on AMD's Zen CPUs having a greater than 40% increase in IPC on the OC3D Forums.

AMD has stated that Zen will have a "greater than 40%" IPC improvement. https://t.co/br5GL88TxN pic.twitter.com/CV0ZRuoDFY

That's not a 40% incline and the Y-axis doesn't even have (f)actual information on it.

WYP
Quote:
it doesn't matter though, all it needs is a scale (Y-axis) on the side. 40% is a huge leap though. we also need to remember that this is compared to excavator, not Piledriver (the last desktop 8-core)Quote

Reminds me of that graph they did where their card was about 10% faster than an Nvidia one and at the bottom of the Y-axis the 10% steps were all spaced quite small, but then the gaps started getting bigger and bigger so the AMD card's bar ended up being a good 30% taller than the Nvidia card's while the graph's numbers indicated that it was <10% faster

I'll see if I can find that back now but I think they took it down pretty quickly after a lot of community backlash. You'd think they would learn from it

AlienALX
They said this about a year ago lol.

Whether it's true is what remains to be seen.Quote

AngryGoldfish
I'm not sure I like the idea of one socket and one motherboard unifying multiple different Zen iterations. As mentioned in the article, the top-end motherboards absolutely have to have the most modern features or else I won't be interested. The main reason I wanted to upgrade to Z170 was because of the PCI-e x4 support that allowed for very fast M.2 and PCI-e SSD's. That's genuinely exciting to me. Really, it was the Z170 chipset that interested me more than the 6600/6700K, to be quite honest. Whilst you won't have to upgrade your motherboard with every CPU change, will you be left behind as Intel releases new chipsets with new valuable features?Quote
Reply