A 2x increase in core count over 1st Generation EPYC

During their "Next Horizon" event in San Francisco, AMD has officially confirmed that their 7nm Zen 2 EPYC processors will offer up to 64 cores and 128 threads per CPU socket, delivering a 2x increase in server density over their 1st Generation EPYC processors.

AMD has previously confirmed that Zen 2 will be socket compatible with their existing EPYC CPU platform, making it no surprise that their 2nd Generation EPYC processors will offer the same 8-channel DDR4 memory setup as their 1st Generation counterparts.

In SPECfp, AMD has claimed that their 2nd Generation EPYC processors will offer a performance increase of around 2x when compared to their first generation offerings, a staggering increase today's EPYC processors, setting up AMD to capture market share from Intel in the high-end datacenter market.

This performance increase will come through AMD's use of TSMC's 7nm manufacturing process and the company's Zen 2 core architecture, which is discussed in more detail here. AMD has also confirmed that their Zen 2 EPYC processors will achieve their high 64x core count by using eight 8-core CPU dies. 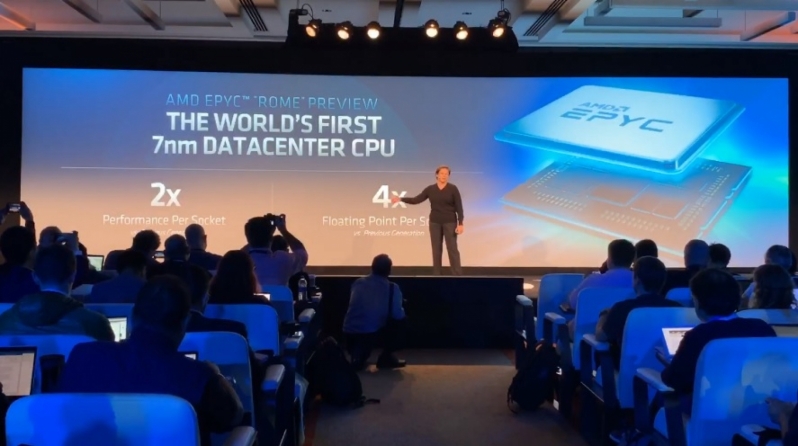 You can join the discussion on AMD's Next-Generation 7nm EPYC processors featuring 64 physical cores on the OC3D Forums.

NeverBackDown
Only a 2x increase in performance? I'd say that's actually worse than expected considering they double core/thread counts.Quote

AlienALX
I would guess they mean IPC. However, it all depends on how Zen 2 clocks. If it clocks higher (and it should, really) then the difference will be more pronounced.

Now I can see why Intel are bricking it and making 48 core CPUs though. It makes sense now.Quote

WYP
Quote:
Remember that this is a server part and that power and thermals are a major factor. It's impressive that they got a 2x increase from 2x the cores, never mind the 4x increase in floating point.Quote

tgrech
You can't get a 1:1 2x in performance just be doubling core counts (See Amdahls law). Combined with the fact that the number of memory channels has to remain at 8 so bandwidth/core will likely be little more than half, and the fact that you've now got the thermal output of twice the number of cores in the same size area (Which means the benefits of 7nm here have to go towards the same-clocks improved efficiency side of things as opposed to increased clocks), as well as twice the amount of data being thrown around the interconnects, that means that in order to actually attain a x2 increase would require ridiculous amounts of work when it comes to reorganising cache's and interconnect technology to avoid everything bogging down from data transfer bottlenecks, alongside massive increases in efficiency and IPC.Quote

NeverBackDown
Quote:
Same as it was for first gen Epyc. So I don't see that as being a factor considering they will most likely be running low frequencies higher up in the range you go, and considering the switch to 7nm allowing for the same performance at much lower power consumption I bet they will see similar frequencies. Hence the simple 2x increase instead of more as they elected to run same power consumption. Which is probably the only option without wanting to melt the coolers.
FP is a different story considering it has native support whereas the first gen did not. So really anything is impressive on that partQuote
Reply