It's time to look a little deeper into AMD's Zen 2 architecture, specifically at the factors which have been considered as weaknesses in the company's existing Zen and Ryzen series models.

With Zen, and to a lesser extent Zen+, AMD's DDR4 memory latency numbers were notably larger than Intel's competing processors, with AMD's caches presenting similar issues. With Zen 2, AMD opted to mitigate these problems, both by working to decrease memory latencies, and by doubling Zen 2's L3 cache sizes to decrease their processor's reliance on DRAM for critical data.

In their latest presentation, AMD has called their revamped L3 Cache "GameCache", noting how their doubling of L3 cache sizes their reductions in "effective memory latency" have had a considerable impact on their processor's gaming performance.

In the slide below, AMD notes that their L3 cache changes have a larger impact than moving from 2667MHz DDR4 memory to 3600MHz speeds. Those who are familiar with AMD's original Zen processors will know that DDR4 memory speed has a notable impact on game performance, a factor that makes the performance impact of AMD Zen 2 cache changes all the more astounding. 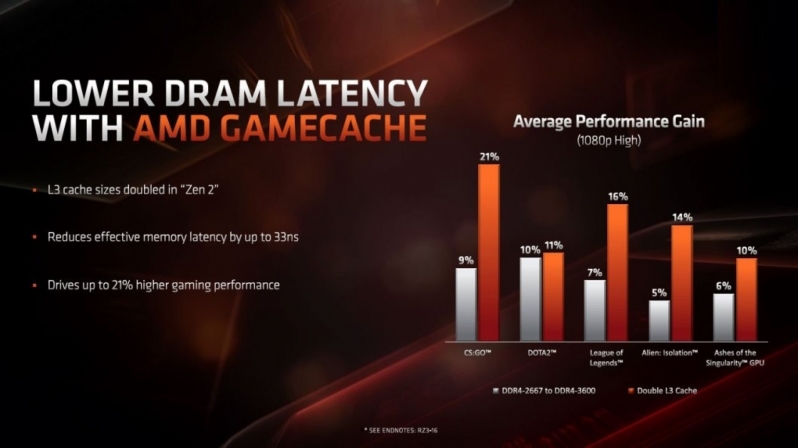 This time, AMD recommends 3600MHz memory with CL16 timing, as this offers an ideal price/performance ratio. With their next-generation processors, faster memory speeds will be possible, but only when AMD shifts their Infinity Fabric to DDR memory ratio to 2:1 mode, slowing down Infinity Fabric speed to enable increased memory performance.

With Ryzen 3rd Gen, AMD has showcased memory speeds of over 4000MHz, but only speeds of up to 3733MHz were possible in 1:1 mode. Depending on your specific use case, you may prefer higher infinity fabric speeds to higher raw memory speeds. The slide below notes that 3733MHz memory speeds at CL17 timings offer optimal memory latency characteristics. 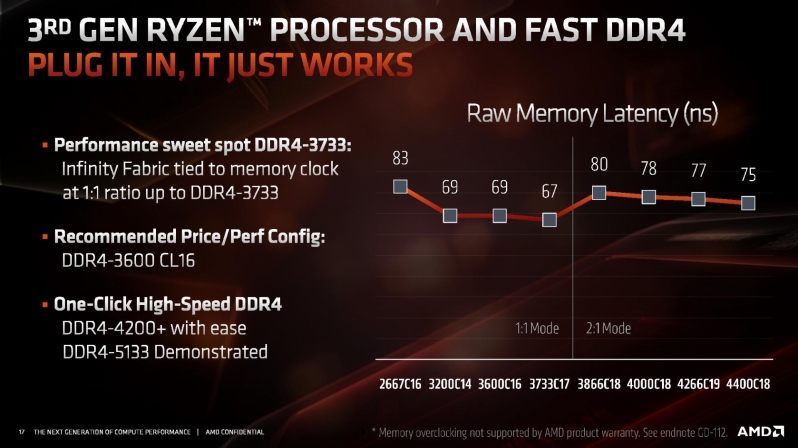 So what does this mean for gamers? First, it means that AMD's Ryzen 3rd Generation processors will be less memory limited than previous generations, supporting faster DDR4 memory speeds while also offering larger L3 cache sizes to keep more data as close to the processor as possible.

AMD has stated that 3rd Gen Ryzen processor will have a "plug it in, it just works" level of support with DDR4 memory, which is a refreshing change when compared to the company's initial Ryzen launch, which was plagued with memory compatibility issues. That has changed with Ryzen 3rd Gen, which is great news for AMD and consumers alike.

You can join the discussion on AMD's Gaming-focused DDR4 and Cache improvements in Zen 2/Ryzen 3rd Gen on the OC3D Forums.

NeverBackDown
I'd like to see a lot of benchmarks on this personally.Quote