AMD's Threadripper CPU platform is now available to Pre-order in the UK, allowing interested PC builders to purchase 12-core and 16-core Ryzen CPUs alongside high-end TR4 motherboard offerings from a range of manufacturers.
Below is a table which highlights the UK pricing of AMD's Threadripper CPUs, with the 1950X and 1920X releasing on August 10th. AMD's 8-core 1900X CPU will release at the end of this month.

Today is the first time that consumers have been able to see the prices of AMD's X399 series motherboards, with all currently available offerings being priced at £330 and over. These prices are exceptionally high, even for an HEDT motherboard, though they are marketed under premium brand names, which means that more affordable offerings may be on the way.

It is worth noting that Gigabyte's X299 Gaming 7 is selling for more than the TR4 X399 Gaming 7 (£416 vs ££359), so there is hope that more affordable TR4 motherboards are coming. That being said AMD's choice to offer 64 total PCIe lanes could have added greatly to the cost of these motherboards.

There is certainly potential for more affordable motherboards to be released in the future, lacking as much RGB lighting and as many bundled accessories. ASUS has already confirmed that they will be releasing a more affordable X399 Prime-A for $350. 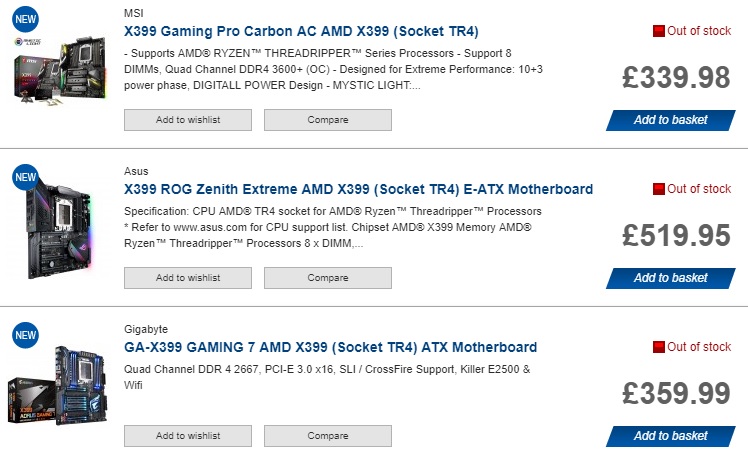 You can view available Threadripper CPUs and TR4/X399 Motherboards at Overclockers UK.

You can join the discussion on AMD's X399/TR4 platform on the OC3D Forums.

Gothmoth
i hope three month away there will be an asus strix x399 mobo for around 350-380 euro.


the asus zenith comes with a 10gb ethernet card right?

as much as i would love 10gb, the 10gb switches are way too expenisve.

WYP
Quote:
Yeah, it has a 10g Ethernet card. Those things are pricey.


Quote:
This is more of a flagship board vs a more standard high-end design. ASUS has a Strix board coming that will likely have similar pricing to the other boards.Quote