AMD's official overclocking team is back on top

Now, AMD's overclocking team has gotten in on the action, with the American overclocker Sampson achieving a new Cinenbench R20 record of 40,527 points. This was achieved on an ASRock TRX40 Taichi motherboard with a Ryzen Threadripper 3990X at 5.25GHz.

This overclock was achieved using liquid nitrogen and G'Skill'z Trident Z Royal series memory, which was running at CAS 14 timing and 2800MHz memory speeds. Only time will tell if other Threadripper 3990X overclockers will be able to surpass this record in time.

At stock, AMD's Ryzen Threadripper 3990X can already deliver mindbending levels of CPU performance in multi-threaded tasks, but in the world of hardcore overclocking, a CPU's stock performance is never enough. One has to wonder if we will ever see such a high Cinebench R20 score on a consumer-grade CPU at stock, and if so, how long will it take for such a processor to hit the market? 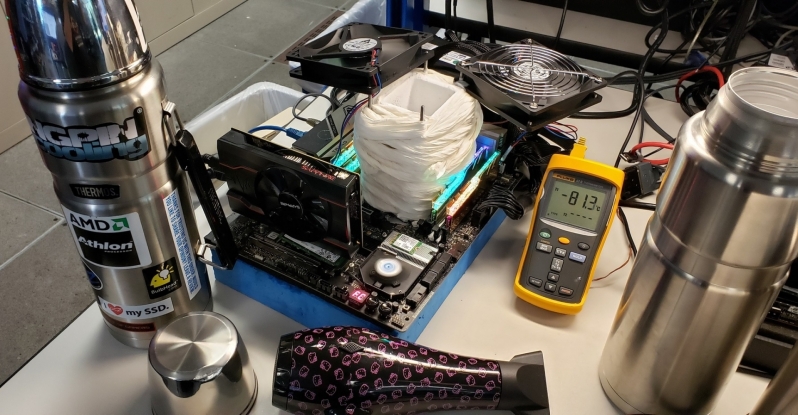 You can join the discussion on AMD's Ryzen Threadripper 3990X processor and record overclocking performance on the OC3D Forums.

NeverBackDown
Considering the 2800mhz it is pretty impressive. If they could bump that up without the CAS going up to much as well they could probably skyrocket those scores. Just an assumption. I'm not a pro overclocker...Quote

AlienALX
Mad. That's about 6 to 7 times faster than my 1920x lol.Quote

WYP
Quote:
Hard to know. Cinebench doesn't tend to respond much to memory overclocking. Lower memory speeds could be the cost of such high clock speeds. That said, memory could be an issue with this many cores/threads at high clock speeds.

Would be interesting to hear from pro overclockers and see what goes on in their heads when doing such insane overclocks.Quote
Reply