Ryzen PRO has been adopted by the big three

It is undeniable that AMD's Ryzen series of processors have been successful, especially within the enthusiast market, creating a fundamental shift in the PC market as we knew it.

While the enthusiast market can create a lot of revenue with high-end product lines, the OEM market provides the bulk of processor sales worldwide, whether it be from consumer-class systems to enterprise-grade workstations or office systems. AMD needed to tap into this market to create a long-term success out of Ryzen, not only to deliver them increased sales but also to provide the company with the brand recognition that mainstream systems can provide.

Today AMD has announced that their new Ryzen PRO series of mobile and desktop APUs have been adopted by the big three, Dell HP and Lenovo, the three largest OEMs in the PC market. This adoption will see each manufacturer create business-class notebooks and desktop systems using AMD's new Ryzen+Vega APUs, allowing AMD to cover a new section of the OEM PC market, outside of consumer notebooks and desktops. 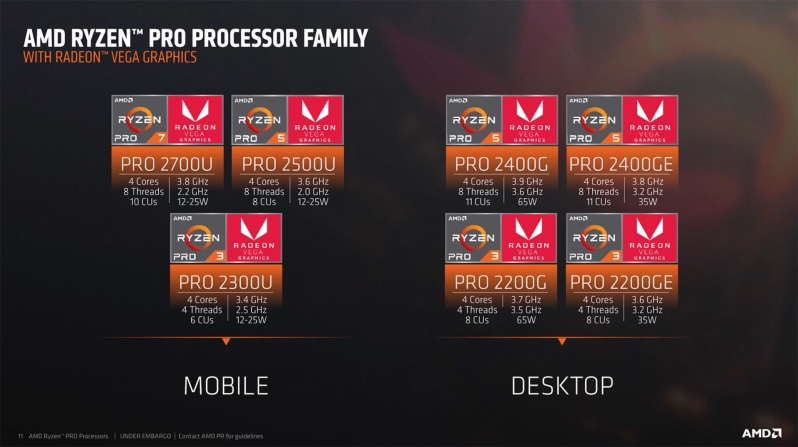 Below are the specifications of AMD's new Ryzen PRO series of desktop/mobile APUs, though these units are pretty much identical to their non-PRO series desktop counterparts. 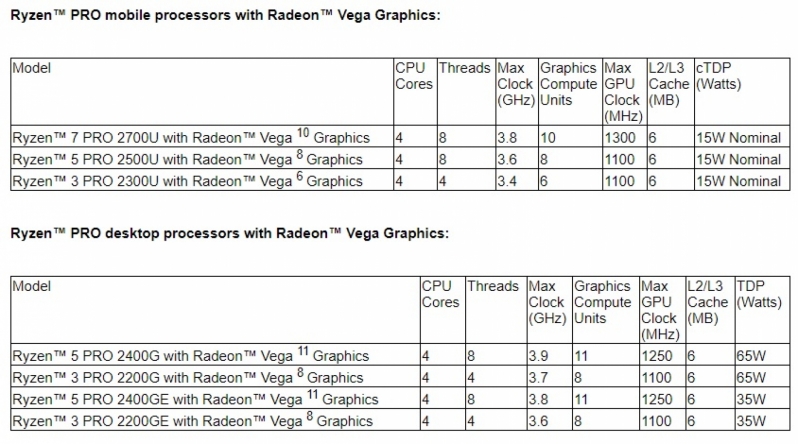 AMD tacking the enterprise OEM market is no small feat for the company, providing a much-needed step towards restoring the company's reputation within the market as a creator of competitive processor technology within the desktop market. This adoption will help AMD to continue their revenue growth into 2018, allowing them to invest further into their future processor designs.

You can join the discussion on AMD's Ryzen PRO desktop/mobile adoption on the OC3D Forums.

Giggyolly
But no business users are willing to buy AMD, Intel mindshare is too great. At least in Desktop.
Ryzen Pro 1 was available to OEMs but didn't do well.

demonking
Quote:
This is very true, the business is going to asking why should we switch? Seems like a risk. The only way to counter it is to to sell them cheap. Businesses are run by accountants. If it saves them money and does the same thing, it'll seem like the best thing since funnelling funds through tax havensQuote

Daiyus
Quote:
So true. I'm in the process of requesting an upgrade at work as my i3-3220 really isn't cutting it anymore, not to mention the slow as balls 5400RPM hard-drive. I considered sourcing an i7-3770 to save the company the cost of a platform upgrade but they're like hens teeth these days; I would've paired it up with £30 SSD and slaved the current 500GB HDD. Would've made a cheap upgrade.

The IT company we employ are recommending a quad-core i5 build, but I know for the same price I could get a Ryzen 5 hex-core with a far higher multi-threaded performance which would benefit my workflow. I know this because I own one in my rig at home and when I work from home my output is higher.

Of course when I suggested this I was laughed off as "not knowing anything" because I am "only an enthusiast" and that I "don't know how business works". My boss said "when you run your own IT consultancy company you can recommend what you like to your clients".

They're so brainwashed by Intel after the FX Series debacle.Quote

Davva2004
I work for the government, and we are all rocking A4-5300B APUs here courtesy of HP. I see a big market for these.Quote

NeverBackDown
Quote:
Explains why y'all take forever... No offense to you