Update - AMD has now removed the words "recently launched" from their event summary.

It looks like AMD's upcoming Ryzen CPUs will launch at or before GDC 2017, which starts on February 27th. This is according to GDC's own session schedule, which contains a session called "Optimizing for AMD Ryzen CPU", which is presented by AMD is said to take place after AMD's Ryzen launch.
At this GDC session, which is presented by AMD, the company will be showcasing best practices which will help developers get the most out of AMD's new CPU architecture. 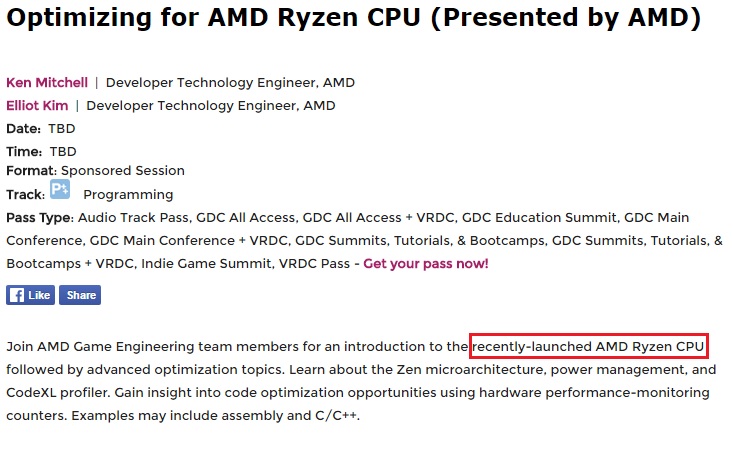 (This event will happen shortly after AMD's Ryzen launch)

As you can see in the session schedule above, AMD will be launching their Ryzen series CPUs at or slightly before GDC 2017, which will take place between February 27th and March 3rd.

You can join the discussion on AMD's Ryzen CPU launch on the OC3D Forums. Find all of the latest PC hardware and gaming news on the OC3D Homepage.

AndyN
If this is accurate, then it is perfectly timed for me to sort out my Birthday present to myself.

g0ggles1994
Well, at least it isn't March. Wish it was sooner though, got a pile of parts ready to rock but can't install any until Zen (finally) launchesQuote

RobM
shame they are holding back GPUQuote

AlienALX
Quote:
It's not ready. You can tell the one they were using was a production sample. When they order PCBs for those they order like one or two. My guy in Taiwan posted when they ordered those and it was in September. Raja said he was somewhere sorting out Vega on Twitter which all coincided with the order AMD had made for PCBs.

They have not placed a large order yet. IMO showing Vega was just to try and keep the wolves from the door tbh. It's nowhere close to release but AMD wanted to show something to go along with Zen. Which will probably increase their share price and get them more investors.

If you just assume that AMD will release at the same time of the year for GPUs you won't see them until June and in volume until August IMO.Quote

NeverBackDown
Damn I'm on fire with all these release dates and spec's. I said it would release middle to late February