AMD has officially announced that Ryzen 3rd Generation Threadripper processors will release this November, starting with a 24 core model. In addition to this, AMD has also confirmed that their 16-core Ryzen 9 3950X will be also be released in Novembers, after the processor's planned September release.

In a public statement, AMD said that they were focusing on meeting the strong demand for their Ryzen 3rd Generation processors, and plan to release their highest-end 16+ core processors in volume in November. This will make the release of AMD's 16+ core Ryzen 3rd Gen processors after Intel's planned Cascade Lake-X launch, which is due to take place in October.

Threadripper's "premiering with 24 cores" statement suggests that higher core count models will arrive later. It also suggests that AMD is confident that 24 cores will be able to adequately challenge Intel's Cascade Lake-X lineup, which should release with up to 18 CPU cores. Ryzen 3rd Gen Threadripper processors will likely release with 32+ core models in the future.

We are focusing on meeting the strong demand for our 3rd generation AMD Ryzen processors in the market and now plan to launch both the AMD Ryzen 9 3950X and initial members of the 3rd Gen AMD Ryzen Threadripper processor family in volume this November.

We are confident that when enthusiasts get their hands on the world's first 16-core mainstream desktop processor and our next-generation of high-end desktop processors, the wait will be well worth it. 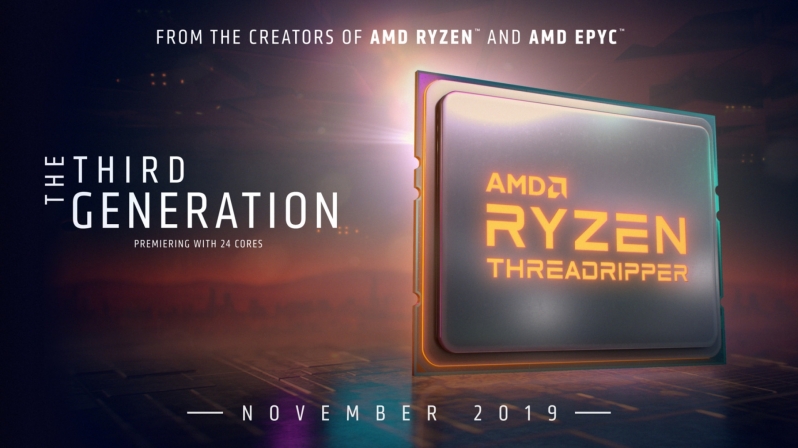 AMD's new multi-die CPU architecture marks a fundamental shift in AMD's high-end Ryzen and EPYC lineups, removing the uneven memory latencies and several other issues which harmed the performance of the company's older Threadripper and EPYC designs. With this in mind, it is easy to see why the industry is excited for 3rd Gen Threadripper processors, as they are due to be a lot more powerful than AMD's existing Threadripper processors.

You can join the discussion on AMD's Ryzen 9 3950X and Ryzen 3rd Generation Threadripper processors on the OC3D Forums.

demonking
Please be priced to smash Intel. I honestly will never be in the realms of being able to buy a part this extravagant but I would like to see some fierce competition to bring the prices down. It will be this round of EYPC and threadripper that defines where the industry goes, If AMD can get some serious OE's under there belt (ideally those that sell servers also) we could see a change where AMD are well established in the server and professional market. Can't remember ever suggesting an AMD part over a Xeon in any circumstances.Quote

Bhebhe
The battle against in the processors. I wanna see what intel would release from their arsenal. Probably the 10th gens.Quote

demonking
Quote:
They don't have anything at the moment, They thought they were so far ahead and they were, until they got stuck on 10nm. If you need evidence, look at Intel's statement on how they thought AMD's chips were just "glued together" and now they are going down a similar development path.Quote
Reply