This is enough to best Alder Lake, but is it enough for Raptor Lake?

Thanks to the Chinese hardware reviewer Extreme Player, we have gotten a look at AMD's upcoming Ryzen 7 7700X processor in Cinebench R20. These results represent significant performance gains over AMD's older Ryzen 5000 series processors, which is great news for AMD and their Zen 4 architecture. 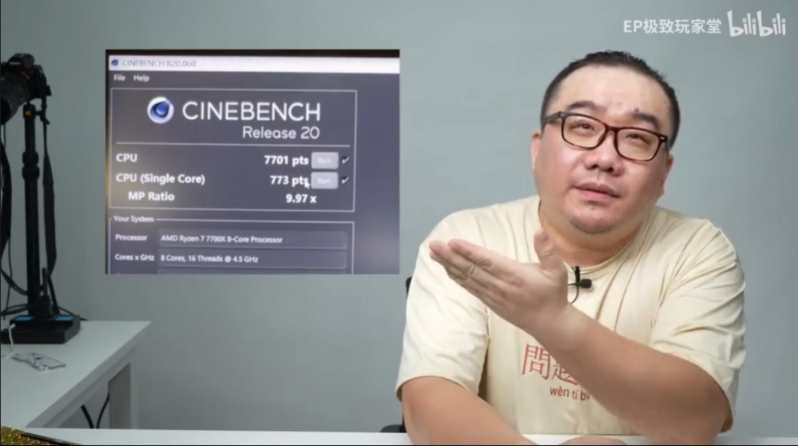 AMD plans to reveal their Ryzen 7000 series processors on August 29th, which means that hardware enthusiasts will not have to wait long to see what AMD has in store for us with Zen 4.

You can join the discussion on AMD's Ryzen 7 7700X processor on the OC3D Forums.

AlienALX
Had a quick look and apparently it can boost to 5.4ghz on a single core. So if it can indeed maintain that clock speed on the single thread test it doesn't sound amazing. I mean, if that is true then the score is simply in line with clock speed gain. And given that it will most certainly be overclocking itself (because AMD leave no head room in there) that makes it seem a little underwhelming. IDK, time will tell I suppose.

Funny though because I said a while back that AMD really needed to start pushing their frequencies. If they don't and Intel manage a shrink again within a decade they'll be in trouble

TBH unless this is an engineering sample with derped clocks that is really underwhelming for a supposed next gen part with 8 cores and 16 threads.

It also concerns me more because given it's the 7700x (with the part name suggesting that it is the replacement for the 5700x which wasn't anywhere near to being cheap).

Dunno man. On the fence this time around. It's also a bit suspicious that they have pushed it forward to beat Raptorlake's launch.Quote

that said i too expect the 7700x to do better.
but on the other side, when AMD can keep power consumption under control that would be a plus.


i would also not be suprised if this is pure BS.
the guy has achived his goal as this is retweeted, reposted all over the internet and amd and intel fanboys fight over it.


the leakers throw numbers on the wall and hope some will be right in the end.

i begin to hate that game...Quote

AlienALX
I would hazard a guess and say this will at least cost as much as the 12700k, though. That is what I was getting at. I know the 12700 has more under the hood, but that's not a bad thing surely?

I think I often forget what the 12700k costs now tbh. I paid about £350, I forget it has gone up in price after the reviews went live LOL.Quote

Gothmoth
i heard that intel will raise prices for raptor lake but AMD will keep price for the 7700x the same.

i don´t compare CPU per core count, i compare them by the money i have to pay and performance.

but yes from some rumors you would expect ZEN4 to do MUCH better than raptor lake.
but i think the rumor sources i trust always said at best 35% better than ZEN3.
and i think 25-26% in cinebench20 is in line with that. maybe early sillicon, non final mainboards.

in the end it comes down to price.Quote
Reply