Zen 3 cores and Vega graphics are a potent combination

A retail model of AMD's upcoming Ryzen 7 5700G APU has been pictured and benchmarked over at Chiphell, an 8-core monolithic processor design from AMD that contains Zen 3 CPU cores and Radeon Vega integrated graphics.

A user of AMD's leaked Ryzen 5700G retail CPU sample has managed to clock the processor at 4.65GHz on all cores, achieving high benchmark scores in the process. Sadly, no benchmarks were provided to showcase the processor's stock performance. 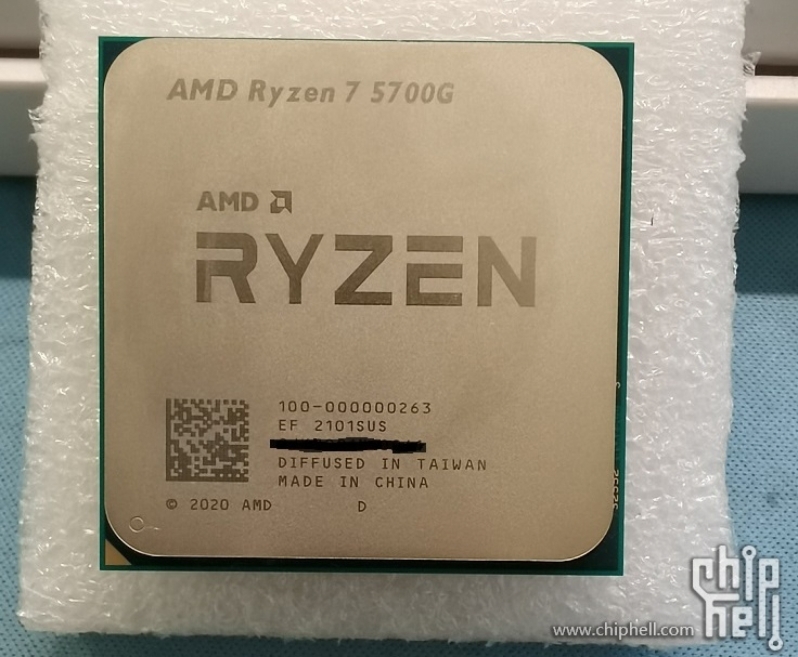 AMD's Ryzen 9 5700G CPUs utilises an 8 CU Vega iGPU, which operated at 2,000MHz at stock using hacked drivers. This is 100MHz below AMD's Ryzen 7 4700G, though it is unclear whether these lowered clock speeds are due to the 5700G's use of non-retail drivers.

Chiphell user Ivanonline confirmed that the processor supported PCIe 4.0 connectivity on AMD's 500 series of AM4 motherboards when testing the processor.

AMD is yet to reveal their Ryzen 7 5700G processor officially, and it is unknown whether or not the CPU will be released to retailers to custom PC builds. The Ryzen 7 5700G's last-generation predecessor, the Ryzen 7 4700G, was an OEM-only product, though the CPU was available to consumers through unofficial channels.

You can join the discussion on AMD's Ryzen 7 5700G processor on the OC3D Forums. 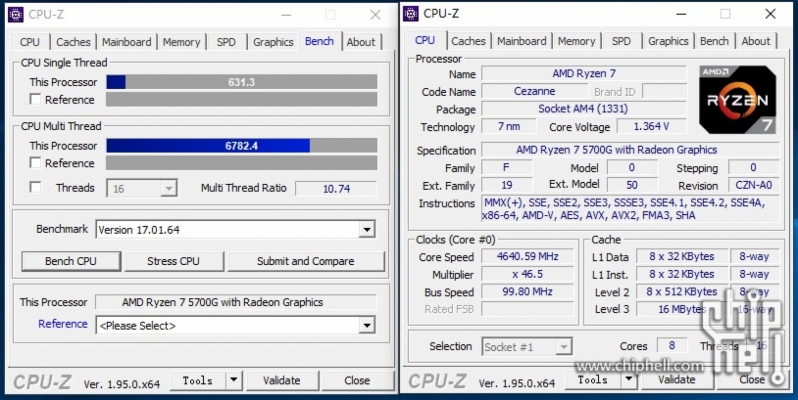 Dicehunter
I would've thought they would be using RDNA and not the overly tired Vega architecture.Quote

WYP
Quote:
To be fair, the display controller is modified/upgraded and Vega itself has been optimised to support much higher clock speeds. It has some clock speed focused changes that RDNA 1 lacked at the time.

So it is Vega but it isn't.Quote

ET3D
Quote:
Vega was always good enough. Intel still doesn't have an iGPU that comes close on the desktop side, and although it's competitive in mobile, that's quite recent and Vega is still in the race there in a reasonable manner.

On the CPU side, on the other hand, AMD was behind and it's only with Cezanne that it's ahead on both single-threaded and multitreaded.

So it made sense for AMD to stick with a tried and true design for the GPU and only update the CPU.

Still, next gen is expected to be RDNA 2.Quote

WYP
Quote:
Yeah, and TBH, AMD was better off focusing on the desktop side of RDNA 2 before moving it down to mobile. AMD still needs to spend its resources wisely, and while better iGPUs would be great, they are not a priority ATM. Better iGPUs won't gain them much market share ATM.Quote

NeverBackDown
This is all true but we are quite a ways into RDNA2 and their roadmap starting years ago you'd think would have upgraded now. They've released what 3 versions of APUs while RDNA was out? Just seems like a deliberate choice. Must be a technical reason. Especially since RDNA is very power efficient for amd.Quote
Reply