Benchmarks of an AMD Ryzen 7600X engineering sample have arrived on the UserBenchmark database, delivering levels of single-threaded performance that surpass Intel's Alder Lake i9-12900K by a significant margin.

AMD's Ryzen 7000 series Engineering sample was running on a ASRock N7-B65XT motherboard with DDR5 memory. This motherboard could be a new N7 series motherboard from NZXT, who have used ASRock in the past to create some of their latest motherboard designs. 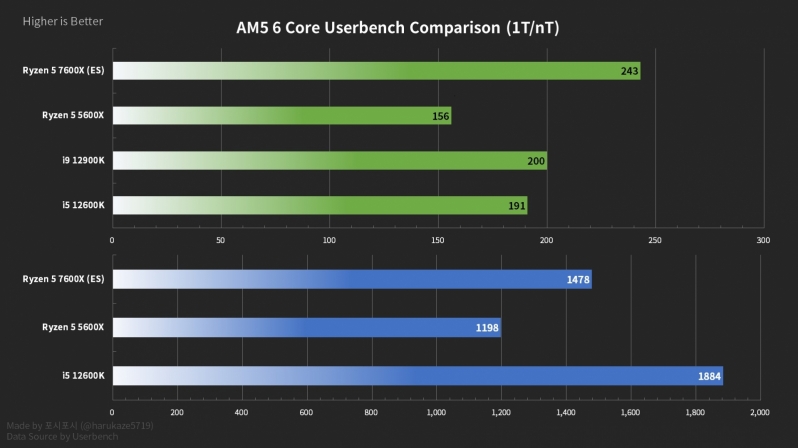 In all, this leaked Ryzen 5 7600X result is a strange one. The single-threaded performance gains over Zen 3 are incredible, but the CPU's multi-threaded performance is a lot less impressive. That said, Userbenchmark is not a tool that we frequently use during our testing, and the creators of the benchmark has a well documented anti-AMD stance. As always, wait for reviews before coming to any firm conclusions regarding any new CPU architecture and take early benchmarking data with a grain of salt.

You can join the discussion on AMD's Ryzen 5 7600X appearing on the Userbenchmark database on the OC3D Forums.


This also means that AMD will be releasing a next-gen CPU that's slower in multi-threaded workloads than Intel's current-gen CPU...Quote

ImprovizoR
The owner of UserBenchmark is probably on suicide watch because of this.Quote
Reply