AMD's 6-core Ryzen 5 3600 has appeared on Geekbench, showcasing the power of the company's upcoming Zen 2 microarchitecture. As AMD's weakest Zen 2 offering, the processor acts as AMD's new baseline when it comes to mainstream performance, shipping for $199 on July 7th.

This Geekbench result comes from a PC with a BIOSTAR X570 GT8 motherboard, operating with what appears to be 2133MHz DDR4 memory and stock clock speeds, running with a base clock speed of 3.6GHz and a boost clock speed of 4.2GHz.

In terms of single-core performance, AMD's Ryzen 5 3600 can deliver a score of 5220, easily surpassing all of AMD's existing Ryzen series processors (when compared to our internal test results for existing Ryzen series processors). In Geekbench's Multi-threaded test, AMD's Ryzen 5 3600 can achieve a score of 27276 points, which exceeds the performance of AMD's Ryzen 7 2700X, both at stock speeds and while overclocked.

You heard that right, AMD's Zen 2-based Ryzen 5 3600 smashes the company's last-generation products in Geekbench, a factor which points towards an incredibly successful launch for AMD. If the Ryzen 5 3600 can surpass a Ryzen 7 2700X, what does that mean for AMD's higher-end Ryzen products? 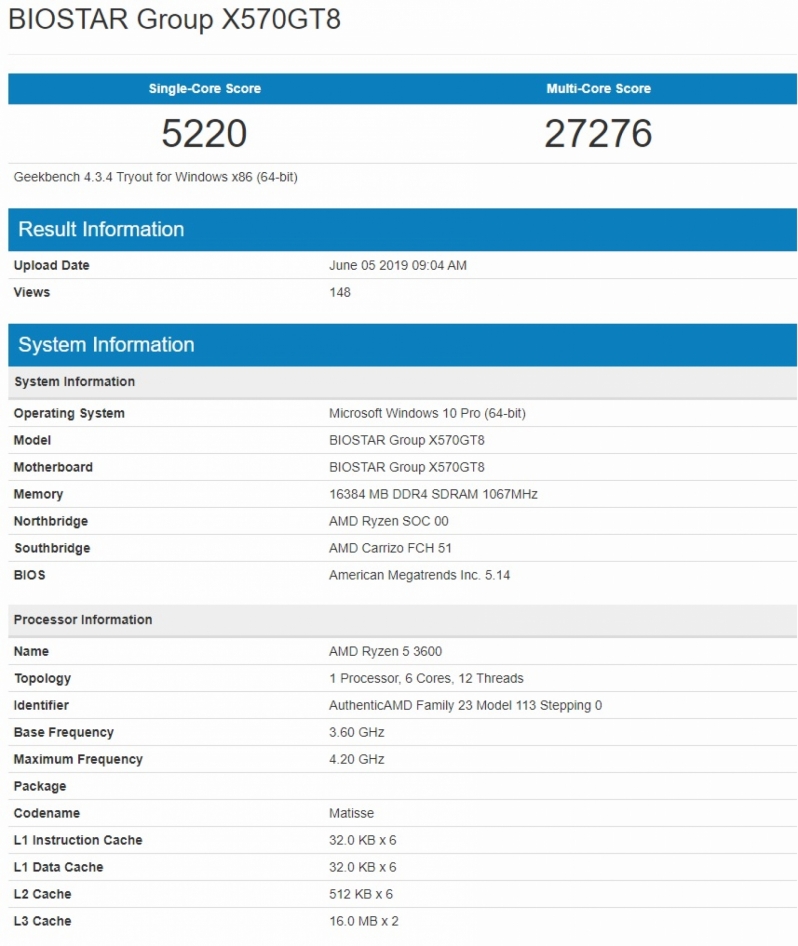 What must be remembered here is that Geekbench can be considered as a weak spot for AMD's existing Ryzen series products, especially in terms of multi-threaded performance. Regardless, AMD's healthy performance boost in Geekbench showcases how AMD has altered the fundamentals of their Zen microarchitecture to remove its weaknesses, resulting in stronger results and higher performance levels over a wide range of applications.

You can join the discussion on AMD's Ryzen 5 3600 appearing on Geekbench on the OC3D Forums.

Gothmoth
only problem is that geekbench is pretty useless.


not going into depth here but linus torwald and others wrote about it.
you can find it on reddit.

only one thing.. geekbench is meant as cross platform benchmark.

yet my TR has double the performance under linux (compared to windows).


most of the test are said to fit into the L3 cache.


there is so much wrong about geekbench i would not even know where to start.Quote
Reply