Today, AMD is ready to reveal its Ryzen 4000 G-series of desktop processors, bringing the same innovations of AMD's Ryzen Mobile 4000 series to desktop platforms with Radeon graphics and up to eight CPU cores.

When compared to today's Ryzen 3000 G-series APUs, AMD has upgraded their processors to double their highest core counts from four to eight. In addition to this, AMD has moved from Zen to Zen 2, transitioned from 12nm to 7nm and updated their Radeon Vega CUs to deliver an astounding  60% more performance per CU.

Thanks to the architectural and design changes within their Ryzen 4000 G-series of processors, AMD has been able to deliver up to a 2.5x performance gain over their older Ryzen 3000 G-series products. That's an incredible generational leap, especially when their integrated Radeon graphics processor continues to be based on AMD's ageing Vega architecture. 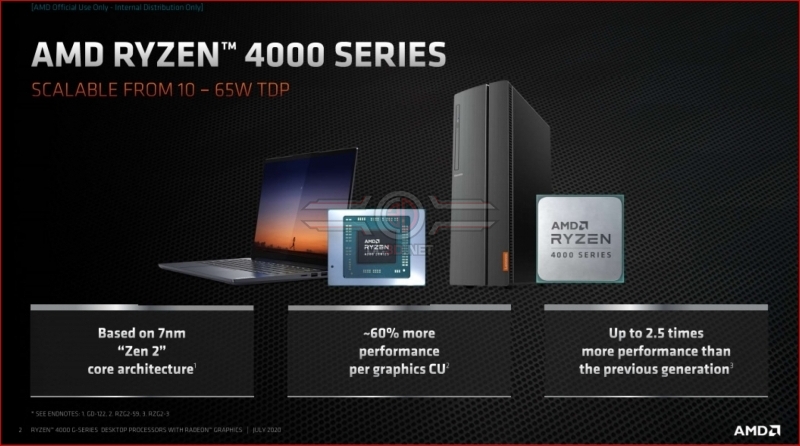 With their Ryzen 4000 G-series of desktop processors, AMD has claimed performance, efficiency and gaming leadership, promising performance levels with exceeding what is currently possible with today's mainstream Intel platforms.

Unlike Intel's mobile platforms, Intel continues to use its 9.5th generation of integrated graphics an their 14nm manufacturing process, giving AMD a distinct advantage in gaming workloads and in terms of power efficiency. AMD's hoping that these factors will appeal to OEM system builders, as well as business users for the Ryzen Pro versions of these CPUs. 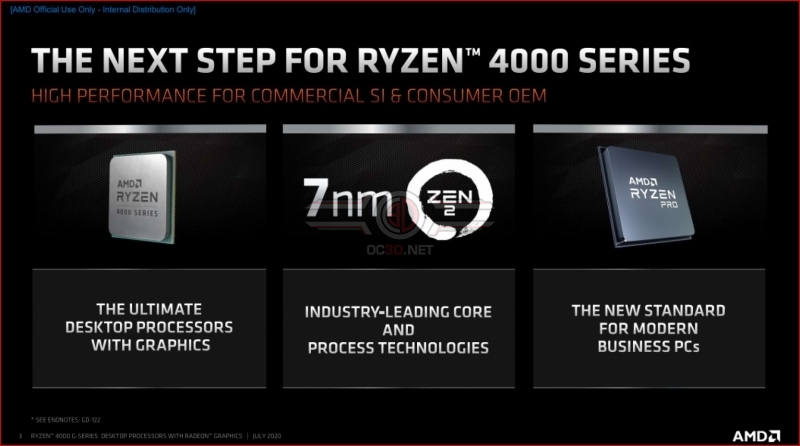 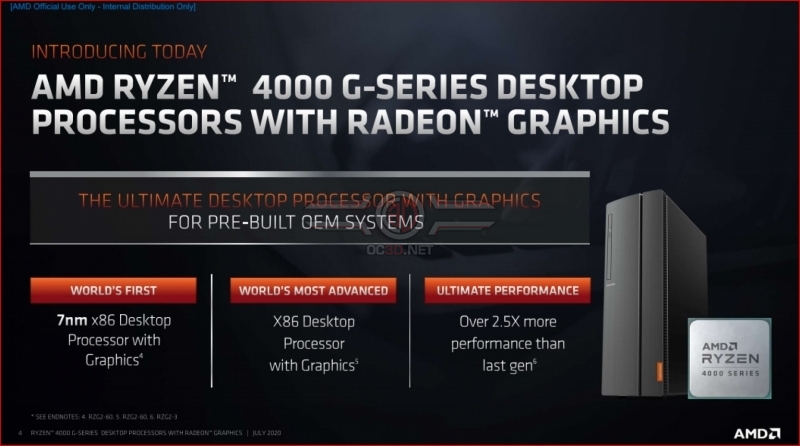 These processors are identical to AMD's Ryzen Mobile 4000 series at a silicon level, with the only major differences being in terms of clock speeds and TDP listings. Based on the clock speeds of AMD's Radeon Vega integrated graphics, we can see that AMD's Ryzen 4000 G-series contains power-focused design changes that today's RDNA-powered RX 5000 series lacks. These changes are due to arrive with AMD's RDNA 2 desktop graphics processors. 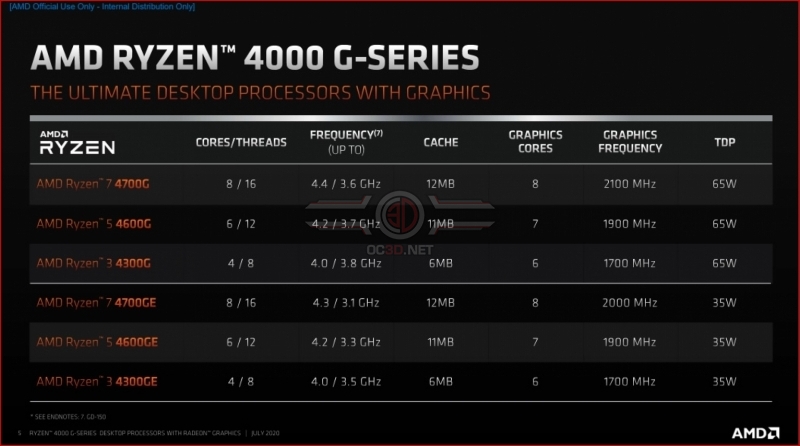 Based on Cinebench results, AMD is claiming both single-threaded and multi-threaded performance leadership over Intel in the OEM desktop market. On top of this, AMD claims to deliver significantly more gaming performance than what Intel's integrated graphics can deliver and higher levels of power efficiency.

If you believe AMD's numbers, their latest processors are better in every way, and that is an attractive prospect for OEM system builders. Based on AMD's efficiency numbers, OEMs would be able to produce systems that consume less power, produce less heat and operate more quietly than Intel-based systems. 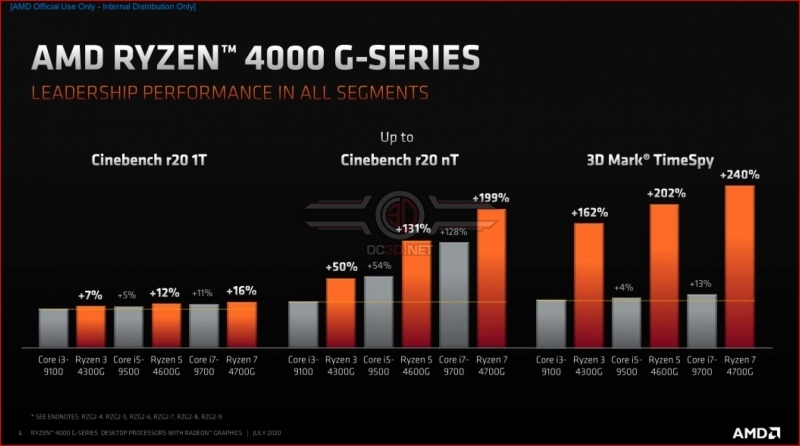 When compared to today's Ryzen 5 3400G, AMD's new Ryzen 4000G processors can deliver up to 25% more single-threaded performance, 152% more multi-threaded performance and 19% more gaming performance. Not bad given the fact that both of these CPU series' feature TDPs of up to 65W. 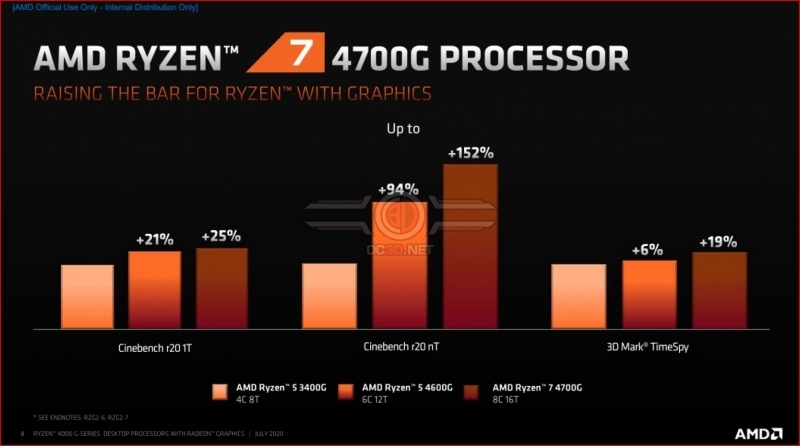 When it comes to gaming, AMD has its Intel rivals outmatched within this product segment. Intel hasn't updated its desktop integrated graphics architecturally since Kaby Lake, a fact which has severely limited Intel's gaming performance. Thanks to this, AMD can offer performance leads which can be as high as 274% in gaming workloads. 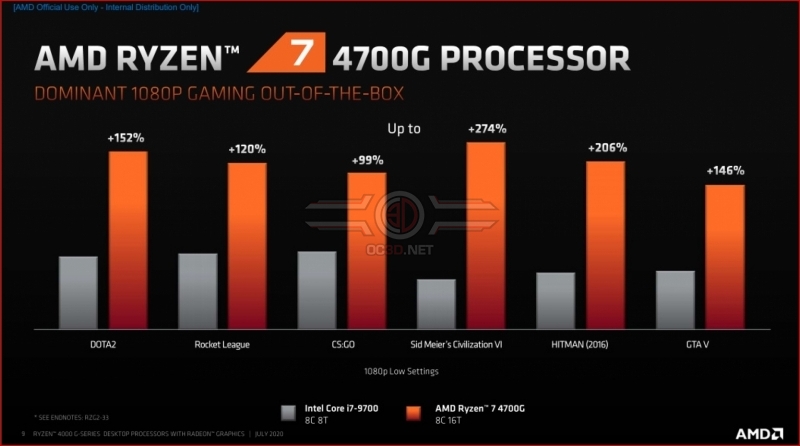 This performance lead is due to Intel's lower core counts and weaker integrated graphics solution. Strangely, AMD didn't compare their system to a 10th Generation Core system from Intel. AMD claims that this is due to the lack of availability for Intel's latest processors in the OEM market, though the use of a 9th generation processor nonetheless colours these results. 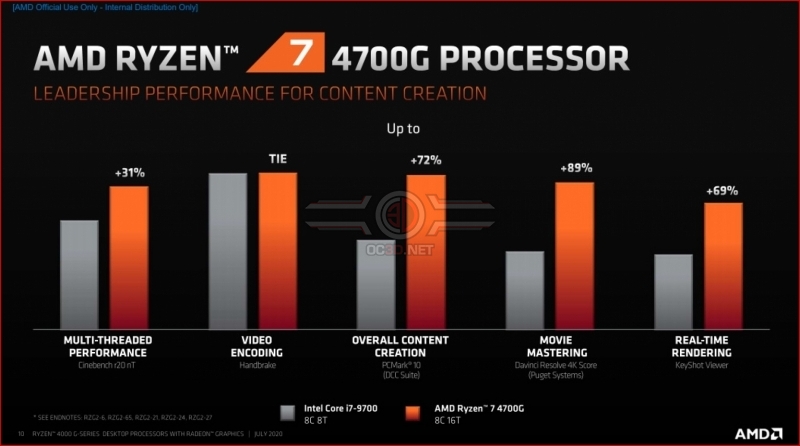 On the low-end, AMD also plans to release new Althon 3000 G-series processors, each of which will offer users more cores/threads than their Intel rivals and lower TDPs in most cases.

These new processors act as AMD's new baseline for the desktop market, where AMD hopes to outperform Intel's Pentium and Celeron offerings. At this time, it is unclear if these processors are Zen or Zen 2 designs. Our guess is that these are new Zen designs, making these new models similar to AMD's Ryzen 3000G series of APUs. 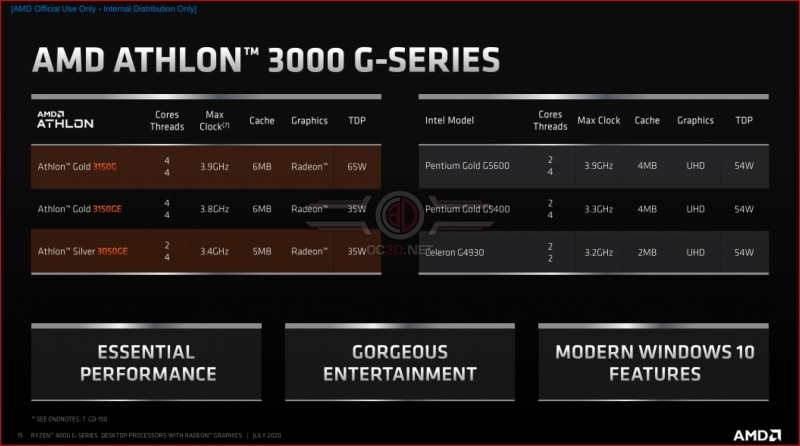 AMD's Ryzen 4000 G-series of desktop processors are due to release in the near future within the OEM desktop market. These processors may release into the enthusiast DIY market in the future, though AMD has not commented on when this will happen.

You can join the discussion on AMD's Ryzen 4000 G-Series of desktop processors on the OC3D Forums.