Rumour has it that AMD plans to release their Ryzen 3rd Generation of Zen 2-based processors in July, after a major announcement at Computex 2019, which will reportedly feature both Navi and Matisse (Desktop Zen 2).

Computex 2019 is dated between May 28th and June 1st, over a month before AMD's rumoured launch date of July 7th, when both Ryzen 3000 series processors and compatible X570 motherboards are expected to become available simultaneously. So far, AMD's official statements regarding desktop Ryzen processors have indicated a mid-2019 launch. 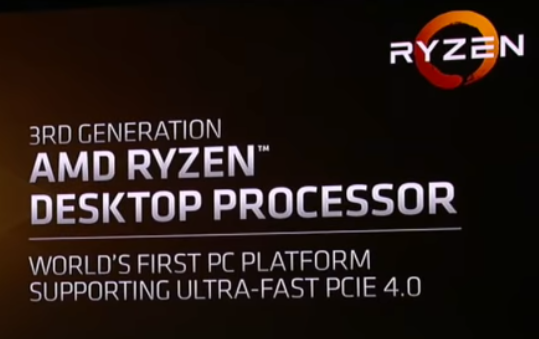 AMD's Ryzen 3rd Generation processors will release with PCIe 4.0 support and be compliant with today's AM4 motherboards, all thinks to AMD's ongoing commitment to their AM4 socket. AMD's rumoured increase in AM4 core counts are not expected to have a negative impact on existing motherboards, thanks to both the increased efficiency of their Zen 2 core design and their use of TSMC's leading-edge 7nm lithography node.

Owners of AM4-based systems should be able to update their motherboard's BIOS to deliver Ryzen 3000 series compatibility, which is great news for Ryzen users who have an upgrade itch. At this time it is unknown how newer AM4 motherboard designs will benefit AMD's Ryzen 3000 series processors, though features like Precision Boost and Extended Frequency Range are likely to be improved with newer mainboard designs.

According to the image below, which is from planet3dnow, most major AM4 motherboard providers plan to support AMD's Ryzen 3000 series processors. 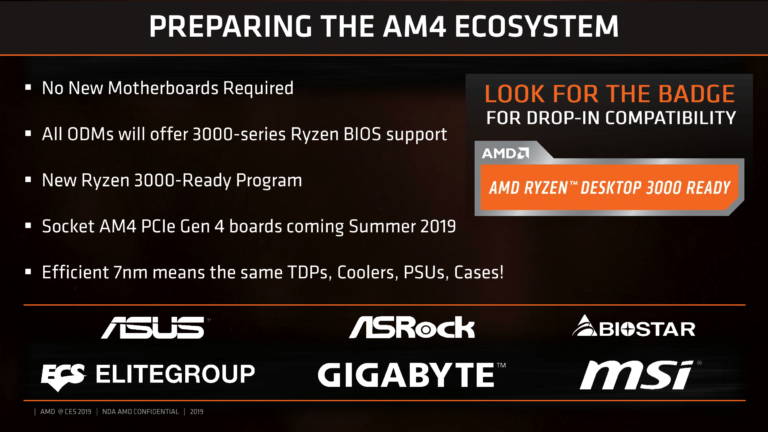 You can join the discussion on AMD's Ryzen 3rd Generation 3000-series rumours on the OC3D Forums.

Badelhas
My body is ready. I've been debating if I should upgrade from my good old 2500k @4.7 GHz and Zen 2 might be worth it.Quote

Excalabur50
Hey Mark they're also pushing TSMC hard to get the Navi GPU's ready as they still want to try and launch all their products at the same time of July 7th as the CPU's and boards were supposed to come out around April.Quote

KingNosser
I'm on a 2500k atm upgrading to Ryzen 1700 while the 3000 series chips will be very nice the first gen prices are just too good for me to turn down. As for the 3000 series I'm hearing nothing but good things with Ryzen 9 chips basically more cores and shifted the stack but I heard due to power reasons the 9 chips will only work on X570.

16/32 will be the new peak on Ryzen, I think amd are doing really well atm and the prices are aggressive the only long term issue I see unless your a video encoded-er is what to to with all these cores

Still I can get my upgrade done in a few weeks just need ram atm.Quote

tolagarf
I'm game! I'm so done with Intel and their greedy tricks to make me upgradeQuote

KingNosser
I wanted to support AMD this time around since they are innovating we have real competition in the market again and if they continue to do as they are atm I won't be going back to Intel any time soon. I get it they sat back and waited they did the smart thing biz wise but by doing that they left the door wide open for amd to catch up.

Ok so my 1700 chip isn't the latest and greatest but I will be happy for a few years and once Ryzen and AM4 and bios's are all done with I will upgrade to the best chip I can at a good price for me it's win win.

My next issue is future gpu's atm my sli 970's are fine no real need yet but at some point I am hoping amd will bring the goods and maybe the next set of cards may be really worth it we'll see.Quote
Reply