Are those traces for a second CPU die?

AMD's Ryzen 3000 series demonstration has raised a lot of questions, what clock speed was their CPU running at, will Ryzen 3rd Gen support higher memory frequencies and how will AMD's use of a two-die setup impact memory latencies.

These are questions that we will have to wait for answers for, but we believe that we have an answer for what may be the biggest mystery of all. Where's the rumoured 16-core?

When Lisa Su presented AMD's Ryzen 3000 processor, we could clearly see that there were two dies on the AM4 package, raising one simple question. Why aren't these packages in parallel? Why is one higher up than the other?

The answer is simple, AMD has left space for a second CPU die, offering up the prospect of a 16-core AM4 Ryzen 3000 series CPU in the process. In the image below you might be able to spot traces for where a second 7nm Zen 2 CPU die could be mounted, sitting underneath AMD's 7nm Zen 2 CPU die, which contains eight cores and sixteen threads. The second die on the processor appears to be an I/O die, making AMD's Ryzen 3000 series similar to the company's EPYC 2nd Generation processors, a die which is built using a larger, more affordable lithography node, likely Globalfoundries 14nm.

If you look closely at the image below you should be able to see traces for a second Ryzen die, but this raises more questions surrounding AMD's Ryzen 3000 series. Wouldn't a 16-core on AM4 product too much heat? Our thoughts on this issue are that AMD will offer lower all-core clock speeds on their highest-end Ryzen 3000 series models, with Precision Boost 2.0 (or 3.0) helping to max out the clock speeds of their processors when all cores aren't utilised. This is similar to how things work on Intel's high core count processors and AMD's Ryzen 2nd Generation processor. 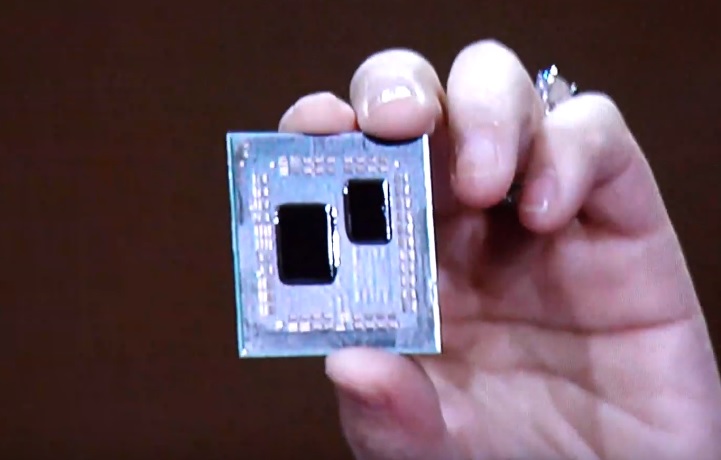 This article is just a little speculation on my part, so please take some salt with these musings. AMD wouldn't manufacture an AM4 package with enough space for two 7nm CPUs unless they had an intention to use it that way, it's as simple as that. That said, a 16-core processor on the mainstream AM4 platform will be well in excess of the requirements of what most mainstream users.

With AMD planning to release their Ryzen 3000 series of Zen 2 processors in "mid-2019", it seems likely that we will be hearing more from AMD at Computex 2019, which will take place between May 28th and June 1st. Perhaps AMD will reveal a 16-core Ryzen processor during their Computex keynote?

You can join the discussion on AMD's potential Ryzen 3000 series 16-core processor on the OC3D Forums.

tgrech
I don't think heat would be a major issue in most systems, maybe tighter systems would max at the 12-core for full turbo blocks/XFR/whatever, but that 9900K is running at stock clock speed, which for that model is generally where the power draw roughly matched rated TDP, putting it at about 100W for the CPU draw (Roughly where we'd expect given it consumes around 140W in Cinebench when it can push boost clocks). AMD's total system power draw was almost 50W less than Intels, so assuming the chipset and other aspects don't have more than a 5W difference between systems, we can expect this chip to be closer to the 65W range than the 105W parts in whatever configuration they were using there.

It's only once you start to near 200W that thermal throttling starts to become an issue with modern soldered CPUs really, and this seems like you could get a 16-core part in closer to the 150W range.

I doubt they'll come with this in the first batch of processors though, isn't really any reason for it as they're only competing with themselves/ThreadRipper at that point, presumably Intel's best possible response to the 8 core would be the rumoured 10-core on 14nm, so a 12 core, maybe a 16 later, would make a lot of sense then.Quote

tgrech
I did think it's possible that could be for a Navi GPU chip but those aren't expected till the 4000 series and we haven't even got the 3000 series release dates yet, plus it seems far too small for a GPU chip.Quote

Dicehunter
According to some info from other places the Ryzen shown off was a Ryzen 5.

tgrech
I personally strongly doubt it, while it lines up with past rumours, those were from now discredited sources. I don't think we're going to jump straight from having 4C/8T in the R5 tier to not having 4C/8T at all and 8C/16T R5, especially given Ryzen3000G is coming alongside and tops out at 4C/8T using the same (externally) tiering scheme. If had to to speculate I'd say everything would be shifted by exactly one tier, IE: