AMD's Ryzen architecture will soon be releasing in APU form, first on mobile later this quarter and then on desktop platforms in 2018, offering the winning combination of Ryzen CPU cores and a Vega graphics.

Ryzen mobile is set to release before the end of this year, starting on consumer mobile products, with a planned release in Q1 2018 for consumer desktops. These Ryzen-based APUs will be a key part of AMD's mobile strategy, offering both strong CPU and GPU components at low TDPs.
An APU called the Ryzen 5 2700U has appeared on the Geekbench 3 database, a CPU that offers 4 CPU cores and 8 threads with a base clock of 2.2GHz an unknown boost clock. This APU is thought to be a mobile model, given its low base clock speed and the U suffix on the product name. In Intel's terminology, U typically means Ultra-Low-Power, a name that is typically reserved for mobile products. AMD has borrowed Intel's naming scheme before, so AMD's use of the U suffix is not unusual.
This APU is inside an Acer built system called the Swift SF315-41, offering some compelling CPU performance levels, particularly when compared to AMD's older Excavator based mobile APUs. Here is another result from a similar Intel i7 8550U powered system from Acer, showcasing some very similar performance numbers. 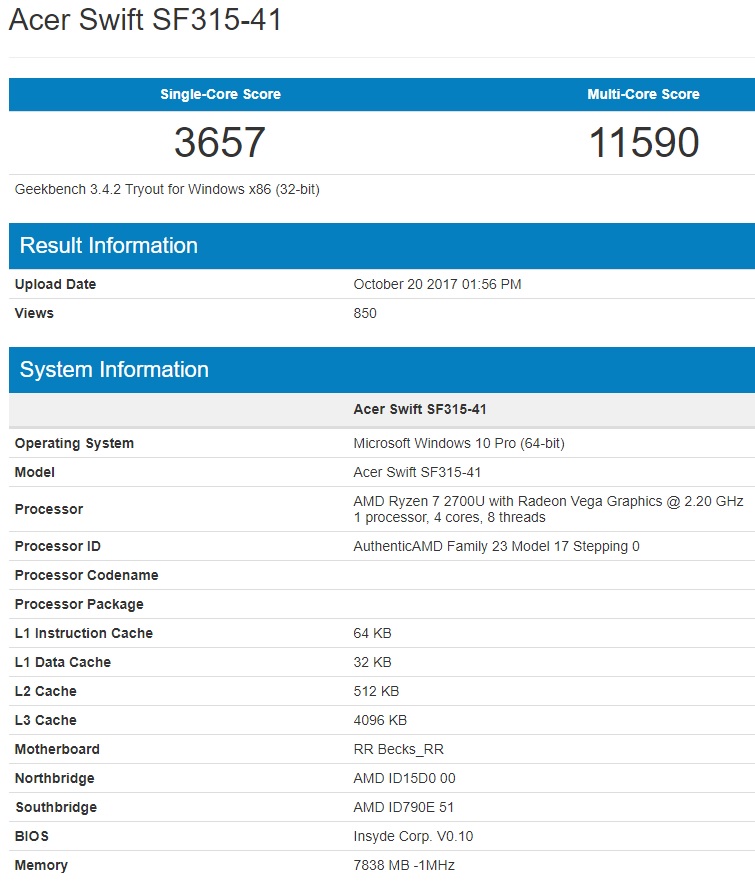 With Ryzen mobile AMD has a huge opportunity to win back the mobile market, especially if they can keep power draw down and offer higher levels of GPU performance than Intel. If AMD's Ryzen/Vega APUs deliver enough performance to offer a reasonable gaming experience the company is certainly on to a winner here.

You can join the discussion on AMD's Raven Ridge Ryzen 7 2700U APU on the OC3D Forums.

Bartacus
WYP: the article link takes you to a JPG of the chip. FYI.Quote

WYP
Quote:
Fixed, thanks for the spot.Quote

AlienALX
I shall ignore the fact it was on Geekbench because it's cruddy. I am quite excited about this though I gotta admit.Quote
Reply