Is Apple considering a move to AMD?

Hidden within the code of Apple's beta 1 for macOS 10.15.4 lies references to AMD processors, a change which suggests that Apple may be considering the prospect of AMD-powered Macbooks in the near future.

@_rogame on Twitter has spotted references to AMD's Raven, Picasso, Renoir and Van Gogh mobile CPU codenames. While this does not guarantee that Apple plans to utilise AMD processors in future Macbooks, it does suggest that the company is considering the option.

With the release of AMD's Ryzen 4000 (Renoir) series of notebook processors, AMD has moved to its Zen 2 architecture and 7nm manufacturing, which has allowed the company to deliver significant leaps in both power efficiency and performance. These factors make now the perfect time for Apple to consider AMD processors, especially given the company's affinity for Radeon graphics chips.

While up to eight Zen 2 cores on 7nm may sound appealing, AMD's SmartShift technology may be what has Apple interested. SmartShift is a proprietary AMD technology which allows AMD's latest mobile processors and mobile graphics cards to increase their power efficiency by dynamically allocating power to a notebook's graphics card or processor, wherever would have the largest performance impact. This technology could allow AMD to offer Apple users higher performance levels and a longer battery life.

Intel's high-performance mobile processors are sticking to the company's ageing 14nm manufacturing process, which is limiting Apple's ability to increase the performance of its notebooks. Intel's Comet Lake series of mobile processors are remarkably similar to the Coffee Lake processors which proceeded them (albeit with higher maximum core counts), and the company's well-documented CPU shortage are both factors which should force Apple to consider alternative manufacturers.

The combination of stronger (than Intel) integrated graphics, 7nm manufacturing and Zen 2 have made now and an ideal time for Apple to consider creating an all-AMD Macbook. That said, this is no guarantee that Apple will create any consumer products with AMD's processors. Note that AMD's Raven and Picasso codenames are mentioned and that those processors use 14nm/Zen and 12nm/Zen+ CPU cores respectively. Those processors are considered inferior to Intel's high-end mobile CPU offerings and are unlikely to be used to create a premium MacBook product. 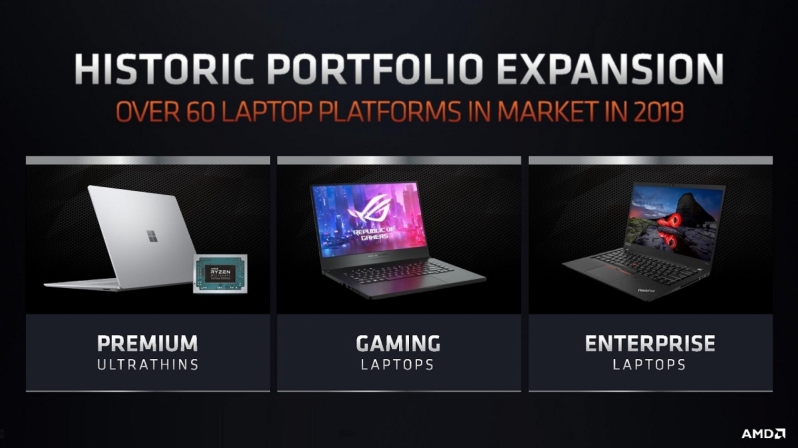 You can join the discussion on AMD's mobile processors being referenced in Apple's macOS beta code on the OC3D Forums.

Giggyolly
The fact is, the MBP is thermally constrained.
So a more efficient Ryzen mobile chip must allow for more performance, surely?Quote
Reply