AMD's James Prior weighs in on the Threadripper "Dummy Dies" controversy

AMD's James Prior weighs in on the Threadripper "Dummy Dies" controversy

AMD's Senior Product Manager, James Prior, has decided to weigh in on the recent discovery that the company's new Threadripper series of CPUs ships with four AMD Zepplin dies, stating that the two extra dies have "no path to operation", dashing all those rumours that extra cores could be unlockable.
Below is Prior's recent tweet regarding Threadripper, which states that there is no way to make the CPU's extra dies operable, calling them "basically rocks".
Please note that these comments come from James Prior's personal Twitter account, so these statements should not be considered as "official AMD statements". James Prior's comments are his own.

Threadripper is not a Epyc processor. Different substrate, different dies.
2 dies work, other 2 have no path to operation. Basically rocks.

Prior also says that AMD decided to use the term "dummy" instead of "inactive" to describe Threadripper's additional dies as there is no way of utilising/activating these additional CPU dies.

Yes, exactly why they're not described as inactive, but dummy.
Doesn't matter if they were dead, or active, they're not going to work.

Even looking at Threadripper's substrate we can see missing components around the two inactive dies (top right and bottom left), which hints that these dies do not have the required connections to receive power or properly function.
Beyond that, it is simply cheaper for AMD to repurpose failed dies within Threadripper than to simply throw them out. Why create matching empty silicon dies to fill the space when AMD already has failed Zepplin dies that already meet their size requirements? 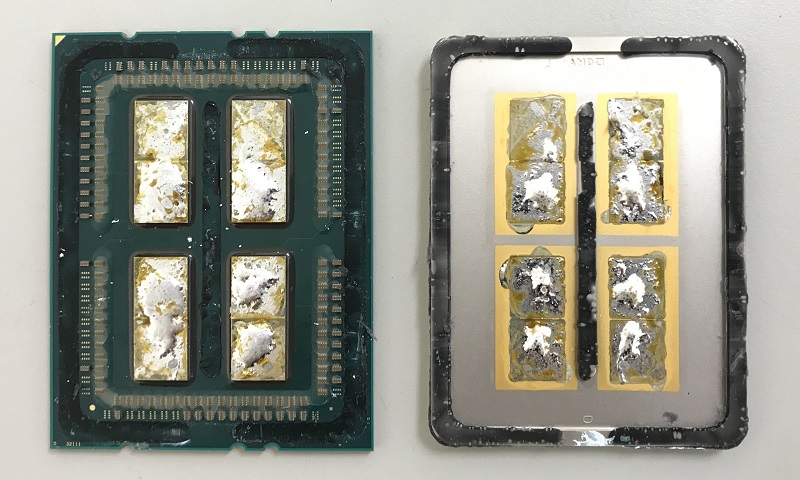 In our first article talking about der8auer's de-packaging of Threadripper, we stated that higher core counts for Threadripper would offer some huge engineering challenges and downsides for the platform, especially when it came to power consumption and clock speeds on X399.

Beyond that, there are factors to consider like memory latency for cores on any additional dies, as dies 3+4 (if the even could be used) would need to access memory through another CPU die, adding a lot of memory latencies to additional CPU cores. This may not be a huge deal for some workloads, but it is not exactly a negligible factor. At least all of the dies on EPYC have direct access to some of the system's memory channels.

This is not to say that a 24-core or a 32-core Threadripper CPUs are impossible, as only AMD's internal engineering teams know for certain, though it would certainly present some unique challenges and issues on AMD's TR4 platform. Beyond that AMD's Threadripper series of products is not exactly designed to be a high volume lineup, so demand for a larger Threadripper series CPU would be extremely limited.

The long and short of it is that Threadripper's additional dies will not be suddenly activated anytime soon and that AMD is extremely unlikely to release higher core count CPUs onto the desktop market anytime soon.

You can join the discussion on AMD's Threadripper CPU design on the OC3D Forums.

AlienALX
Well hey it cuts down on waste I guess

AlienALX
Quote:
We will see. They are going to have to release 32 core Epycs if they want to compete in the server/wstn markets with Intel.Quote

HJ1mech
Quote:
I think they already have a 32 core EPYC don't they?Quote

AlienALX
Quote:
Do they? then there is the answer