The specification and some performance numbers for AMD's upcoming Threadripper 1950X CPU have been leaked on Geekbench, revealing similar single-threaded performance as AMD's existing Ryzen series of desktop CPUs.

This new CPU is though to be the flagship of AMD's upcoming Threadripper lineup, with 16 cores, 32 threads and a base clock speed of 3.4GHz. Right now this chip is expected to have boost clocks of around 3.7 or 3.8GHz.

In images below, we can see that this new CPU has a total of 40MB of cache, with 32MB of total L3 cache. Sadly, this system was tested using 2133MHz memory, so there is a chance that performance will improve when faster memory is used.

The below test was also conducted on an ASROCK X399 professional gaming motherboard, which was shown off at Computex 2017. 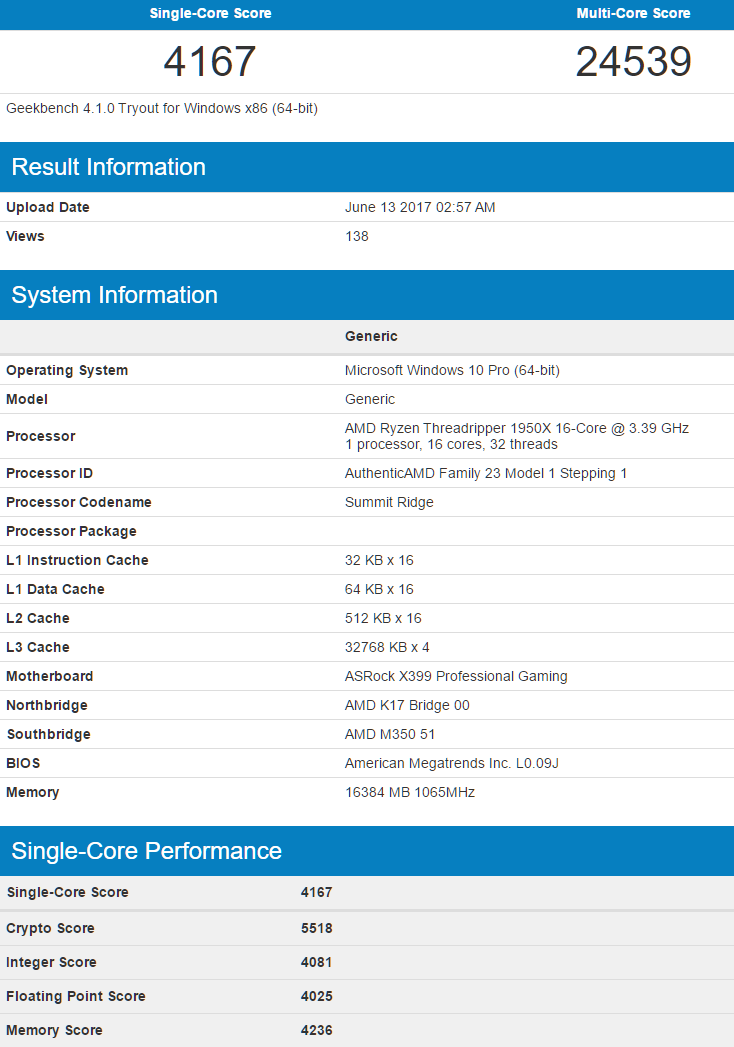 These are some highly impressive scores for Threadripper, though sadly they are not exactly representative of much. We will have to wait until we see Threadripper tested across a wider range of CPU-heavy applications, as only then we will truly see where Threadripper's performance lies.

You can join the discussion on AMD's Threadripper CPUs on the OC3D Forums.

Chopper3
So the single-core score is closest to the four-year old Intel Core i7-4770R and the multicore is a little lower than an Intel Core i7-6900K (which cost about £835) today.

Not impressed yet not surprised.Quote

Bagpuss
I live in hope that one day AMD will sort out their disappointing single core IPC.Quote

AlienALX
Quote:
There is nothing wrong with their IPC. It is fantastic. They need to make it clock better is all.


Quote:
That's not right. We all know that Ryzen is around Broadwell E or better. Something is seriously not right with that benchmark.Quote

AlienALX
Quote:
So what? are they charging Intel money for it?

It's not about who can wee the highest.Quote
Reply