AMD's first B550 motherboard has been pictured

AMD's first B550 motherboard has been pictured

AMD's X570 series of motherboards has been with us for almost a year. Still, many PC builders are eagerly awaiting the release of the company's lower-cost B550 offerings, which are due to offer full PCIe 4.0 capabilities at more cost-effective price points.

Today, we have one of the world's first images of an AMD B550 motherboard from the Chinese company SOYO, coming via the prolific leakers at Videocardz.

While B450 motherboards can support PCIe 4.0 with the correct BIOS files, AMD decided to remove this option from its customers through AGESA updates. These updates are necessary to get the best performance out of AMD's Ryzen 3rd Generation processors, making PCIe 4.0 support a worthwhile sacrifice for many B450 users.

OEM system builders have created systems with so-called B550A motherboards, though these systems were built using modified B450 chipsets with limited PCIe 4.0 capabilities. This PCIe 4.0 support is limited to PCIe lanes that are connected directly to the user's processor.

SOYO's B550 motherboard is a MATX design which features two full-length PCIe slots, a single M.2 slot and VGA connectivity. This board is likely to be used in budget-oriented systems, hence the board's brown PCB and limited connectivity options. 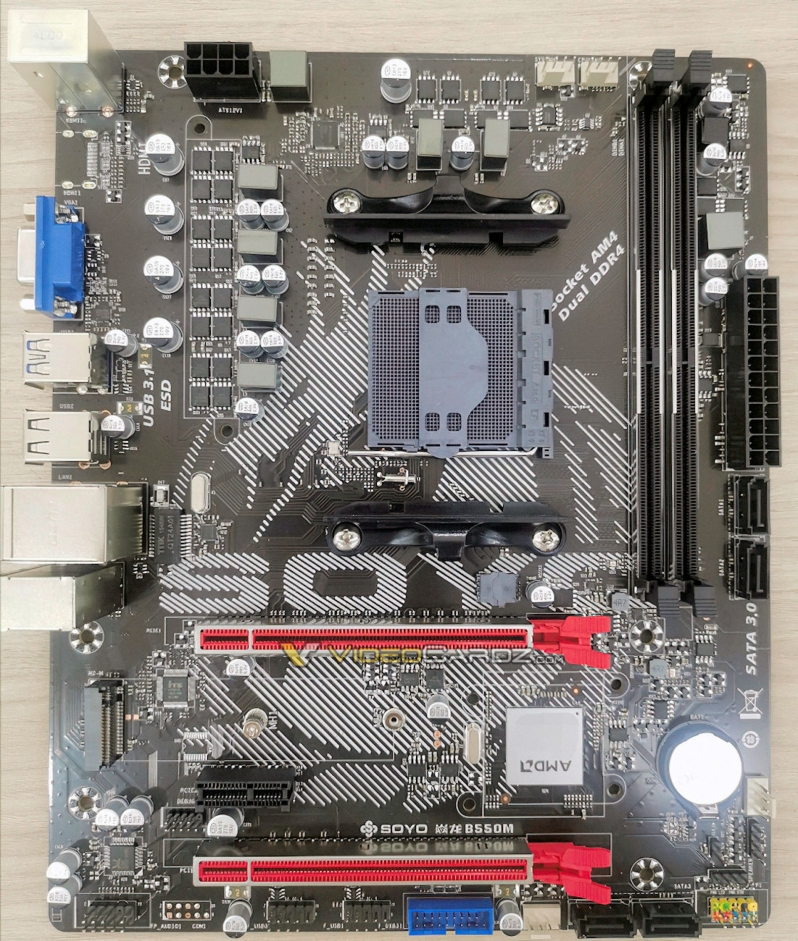 It is likely that we will see AMD release PCIe 4.0 B550 motherboards within the next few months, likely at Computex or another similar event. With Intel lacking any form of PCIe 4.0 support, AMD's B550 series is proof that AMD isn't just ahead of Intel in this regard, but that they can also deliver PCIe 4.0 support with budget-friendly price points.

You can join the discussion on AMD's first PCIe 4.0 motherboard on the OC3D Forums.

Old school man not heard that name in bloody years!!Quote

demonking
Are we confident that this is a B550 not a B550a?
The chipset has had the details greyed out so it does make me question if this is a real b550 chipQuote
Reply