An EPYC fail from AMD?

Ever since the launch of AMD's new EPYC and Ryzen Pro series CPUs, the company has been making a lot of noise about their "Secure Encrypted Virtualization" (SEV) technology, which is present in both AMD's EPYC series of processors. SEV is a hardware memory encryption solution, which allows EPYC processors to protect virtual machines (VMs) from each other and cryptographically isolate it from the system's hypervisor.

In short, AMD's SEV technology can ensure that virtual machines cannot be tampered with by the host OS, protecting them from data harvesting, malware and other attacks.

Fraunhofer AISEC, a German IT security and research firm, has claimed that they have found a way to work around AMD's SEV technology, subverting AMD's virtual machine encryption to access a copy of decrypted data. Like most major security holes in recent history, Fraunhofer has devised a clever name for their exploit, dubbing it "SEVered".

Below is the abstract of Fraunhofer AISEC's research paper, which states that the group have been able to "verify the effectiveness of SEVered" and that  "SEVered neither requires physical access nor colluding virtual machines". That being said, admin-level access is required to modify an EPYC system's hypervisor, limiting the usability of this exploit. Regardless, it is worrying that such an attack is possible, as SEV is designed to prevent such attacks by isolating VM memory from host systems.

AMD SEV is a hardware feature designed for the secure encryption of virtual machines. SEV aims to protect virtual machine memory not only from other malicious guests and physical attackers, but also from a possibly malicious hypervisor. This relieves cloud and virtual server customers from fully trusting their server providers and the hypervisors they are using.

We present the design and implementation of SEVered, an attack from a malicious hypervisor capable of extracting the full contents of main memory in plaintext from SEV-encrypted virtual machines. SEVered neither requires physical access nor colluding virtual machines, but only relies on a remote communication service, such as a web server, running in the targeted virtual machine.

We verify the effectiveness of SEVered on a recent AMD SEV-enabled server platform running different services, such as web or SSH servers, in encrypted virtual machines. With these examples, we demonstrate that SEVered reliably and efficiently extracts all memory contents even in scenarios where the targeted virtual machine is under high load. 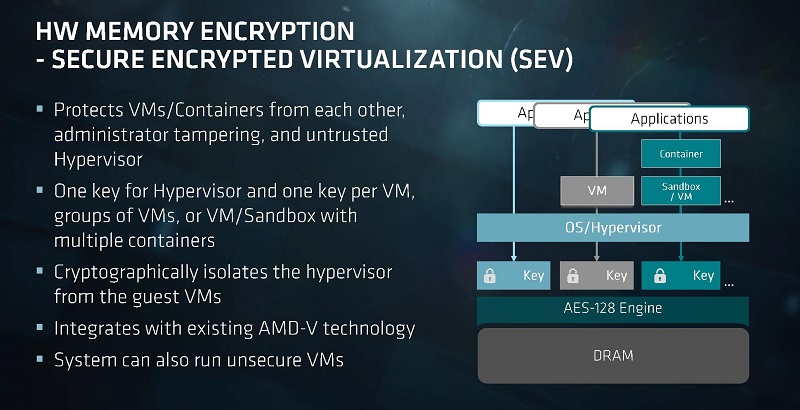 Fraunhofer AISEC's research paper goes into SEVered in great detail, revealing how the exploit can be used to seemingly extract the entire memory contents of virtual machines when SEV is active. The research group have also discussed potential mitigations within the paper, stating that they consider software-based countermeasures "insufficient" and that a hardware fix could come at a "high silicon cost".

AMD has not made a public comment about SEVered at this time, though for now it looks like there is no guarantee that AMD can protect their EPYC processors from the exploit. Will AMD be able to address the exploit with new firmware, or will the issue remain until AMD releases new silicon?

You can join the discussion on AMD's EPYC SEV encryption being reportedly "SEVered" by German researchers on the OC3D Forums.

Special thanks to BFBC2033 for helping us improve this article.

BFBC2033
Unfortunately a key detail is missing. It needs full admin access on the host, which truns this into a Bug not a Security Flaw. Sad to see the same kind of fake news as with the amdflaws. But it seems like the SEV feature does not truely isolate the hyper-visor, maybe we will get there soon.Quote

WYP
Quote:
Thanks for the correction, the article has been updated. A note has also been added at the base of the article to credit you for your help.Quote

RobM
Seems these security firms are quite happy to trash AMDQuote

Kleptobot
Quote:
I think AMD has a little bit of a target on their backs because they were less susceptible to specter and meltdownQuote

I don't think that this would be an issue if you are running your own virtual machine setup as you could use secure boot to protect the hypervisor from tampering. As for third party VM hosting, how well do you trust the third party?Quote
Reply