AMD's 64-core Ryzen Threadripper 3990X has already been pushed to 5.55GHz by overclockers

AMD's 64-core Ryzen Threadripper 3990X has already been pushed to 5.55GHz by overclockers

First up is TSAIK's record overclock of 5.55GHz, which was achieved on MSI's TRX40 Creator motherboard and a single stick of DDR4 DRAM at memory speeds of 1866MHz with CL13 timings. While others have reported that this was an all-core overclock of 5.5GHz, TSAIK's HWBOT submission only shows a single core running at this speed.

Over the coming days, overclocking enthusiasts worldwide will be putting AMD's Ryzen Threadripper 3990X through its paces, so expect to see more world record attempts in the coming days and weeks.

At stock, AMD's Ryzen Threadripper 3990X can already deliver mindbending levels of CPU performance in multi-threaded tasks, but in the world of hardcore overclocking, a CPU's stock performance is never enough. One has to wonder if we will ever see such a high Cinebench R20 score on a consumer-grade CPU at stock, and if so, how long will it take for such a processor to hit the market? 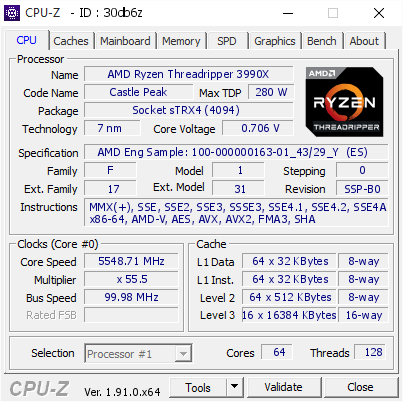 You can join the discussion on AMD's Ryzen Threadripper 3990X processor and record overclocking performance on the OC3D Forums.


Quote:
With a picture of a wattmeter at 841WattQuote

NeverBackDown
Quote:
Not that bad honestly. Not sure what you could expect? 435watts is still on par roughly with other Zen 2 CPUs at around 7 watts per core.Quote

Warchild
Quote:
I agree. I am still stuck 5 years in the past. Need to get my head around the direction we are taking with architecture now.

That being said. I looked again at the intro to the Guru3D review. I just love this wording used. It makes me wonder, what Intel's next steps really are. We hear one thing on the media but what goes on behind closed doors is probably far more tense and hostile.