AMD's Ryzen 5000 series of Zen 3 processors are due to launch on November 5th, delivering a massive 19% IPC increase over their Zen 2 architecture on average while providing more considerable gains in many gaming workloads.

AMD's Ryzen 5000 series processors will support 500-series and 400-series AMD (AM4) motherboards, assuming that they have been updated with supported BIOS revisions. For 500-series motherboards, these BIOS' must contain AGESA Combo-AM4 v2 1.0.8.x or AGESA Combo-AM4 v2 1.1.0.X or newer firmware. As of now, many motherboard manufacturers have already released BIOS files with supports for AMD's Ryzen 5000 series of Zen 3 processors.

What about 400-series motherboards?

Initially, AMD planned to release its Zen 3 processors exclusively on 500-series AM4 motherboards, but these plans changes once they saw how the PC hardware community reacted to the news.

Bringing Zen 3 support for 400-series chipsets is a difficult task, and it looks like AMD will be unable to deliver Ryzen 5000 series support on 400-series motherboard platforms in time for their November 5th launch. However, it is also possible that AMD has delayed Zen 3's X470/B450 BIOS support for other reasons.

AMD has confirmed, though a slide from Computerbase.de, that 400-series motherboard owners should expect to see beta BIOS releases in January 2021. BIOS updates may arrive sooner or later from some motherboard manufacturers, depending on how long it takes to deliver Zen 3 support on X470 and B450 motherboards. 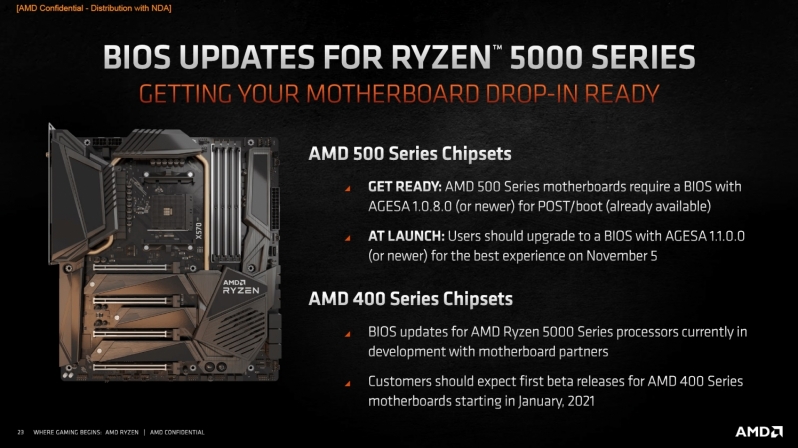 AlienALX
In fairness Lisa did state this.

It's fair enough really. Get sales of boards up for those with no patience, then every one else gets them early next year. By which time stock should be higher etc.Quote

smilertoo
I seriously doubt there will be any new boards for this cpu series; AMD plan to move to a new socket which would mean no upgrade path from a new motherboard....and the whining that would result would be heard from space.Quote

AlienALX
Yeah there will be plenty I am sure. Refreshes mainly with new designs.Quote
Reply