Some new leaks have emerged which have detailed AMD's new "Wraith Max" and Ryzen "Spire" stock coolers, which promise to give AMD's Ryzen CPUs an enhanced "stock cooling" experience.
AMD's new "Wraith Max" cooler comes with a max thermal design power of 140W, which will allow the cooler to handle AMD's 95W Ryzen flagship with relative ease and without the need for an overly loud operation under load. This new cooler will be a refined version of AMD's original Wraith cooler design, which shipped with select AMD FX-series CPUs.
The Wraith Max is said to ship with AMD's Ryzen 7 1800X and 1700X CPUs, with lower-end models shipping with AMD's new Ryzen "Spire" CPU cooler design, which looks very similar to the basic design of Intel's stock cooler. The Spire cooler is listed with a TDP of 95W, making it suitable for all of AMD's Ryzen lineup, but unsuitable for AMD's XFR (eXtended Frequency Range) technology and any form of overclocking. 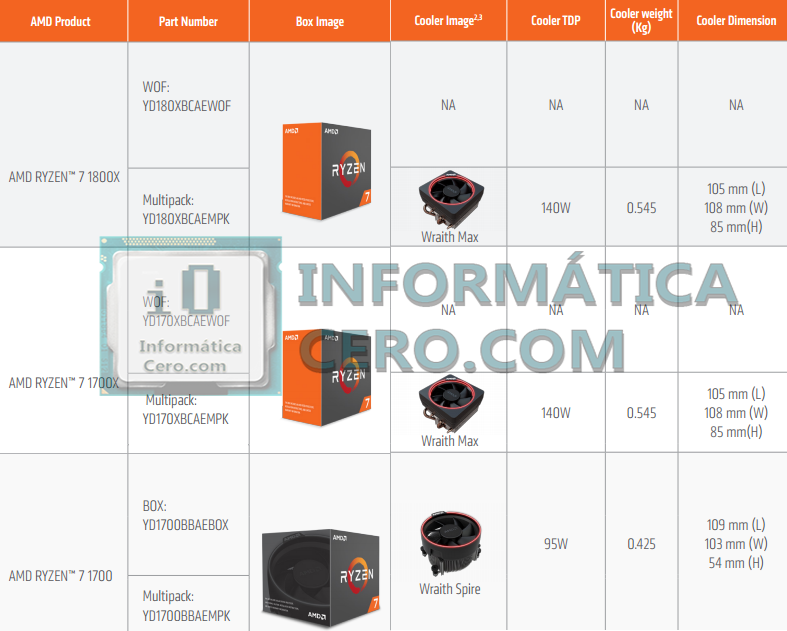 While most PC enthusiasts will likely to continue to use aftermarket cooling solutions, it is great to see AMD moving to use new cooler designs that are not only quieter than their predecessors but may actually worth using on budget, non-overclocked PC builds.

You can join the discussion on AMD's Ryzen CPU stock cooler designs on the OC3D Forums.

WYP
Quote:
Exactly, good stock cooling solutions can be a great selling point, especially for non-overclockers and budget-minded users who can't build their entire PC in one go.Quote

g0ggles1994
It's good to see that they're giving coolers that are suitable for the CPU they are bundled with. Quite impressive the Wraith Max's cooling, but that's expected since the standard Wraith can cool and 8350Quote

Daiyus
Quote:
Absolutely. I want to water-cool my next build, but that'll likely be up to a year after the initial build. Until then it'll be air cooled. If I go for an Intel k SKU then that means I'll need to spend another £30+ to cool it. As RyZen comes with coolers I can put that money towards a better part elsewhere considering it looks like I'll be able to get a six core R5 for around the price of an i5.Quote