With these new CPUs being listed as parts for a Lenovo system, it is possible that these new AMD CPU SKUs will launch as OEM-only products. That said, given today's economic climate, it may be in AMD's best interest to release more value-oriented Ryzen 7000 CPU SKUs.

At this time, PC21.fr has not listed AMD's rumoured Ryzen 5 7600 non-X processor, though it is also worth noting that the retailer does not list AMD's Ryzen 5 7600X as part of any of their Lenovo systems. 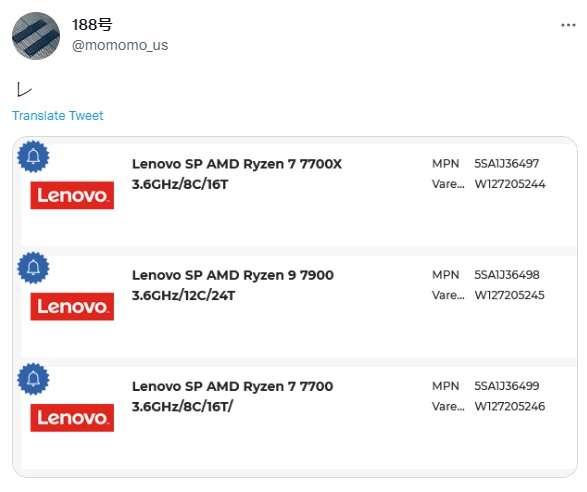 If AMD are to unveil any new Ryzen CPU SKUs, they will likely do so at CES 2023 in January. Here, many analysts expect AMD to showcase their V-Cache Enhanced Ryzen 7000 X3D series of processors, processors that offer enhanced levels of gaming performance which are expected to launch with premium prices. The reveal of these high-cost Ryzen processors could be counterbalanced by new Ryzen 7000 non-X models, allowing AMD to potentially claim that they offer gamers the best performance and the best value processors.