When compared to our internal data for Intel's i9-9900K, which used 3200MHz memory, we can note that Intel offers more performance in Geekbench 4, with our CPU sample achieving single-threaded and multi-threaded scores of  6457 and 35687 respectively. That said, these results were measured before several speculative execution vulnerability patches were added to windows, which means that Geekbench performance may be lower if measured today on a fully updated OS.

Geekbench 4 is a tool that has a strong preference for Intel's core processors, especially when compared to older Ryzen SKUs. In multi-threaded performance, a 32-core Ryzen 2990WX can be bested by an Intel i9-9900K, thanks to the performance oddities of AMD's hugely multi-core/die processor. As such, this benchmark should not be considered indicative of CPU performance in all workloads. 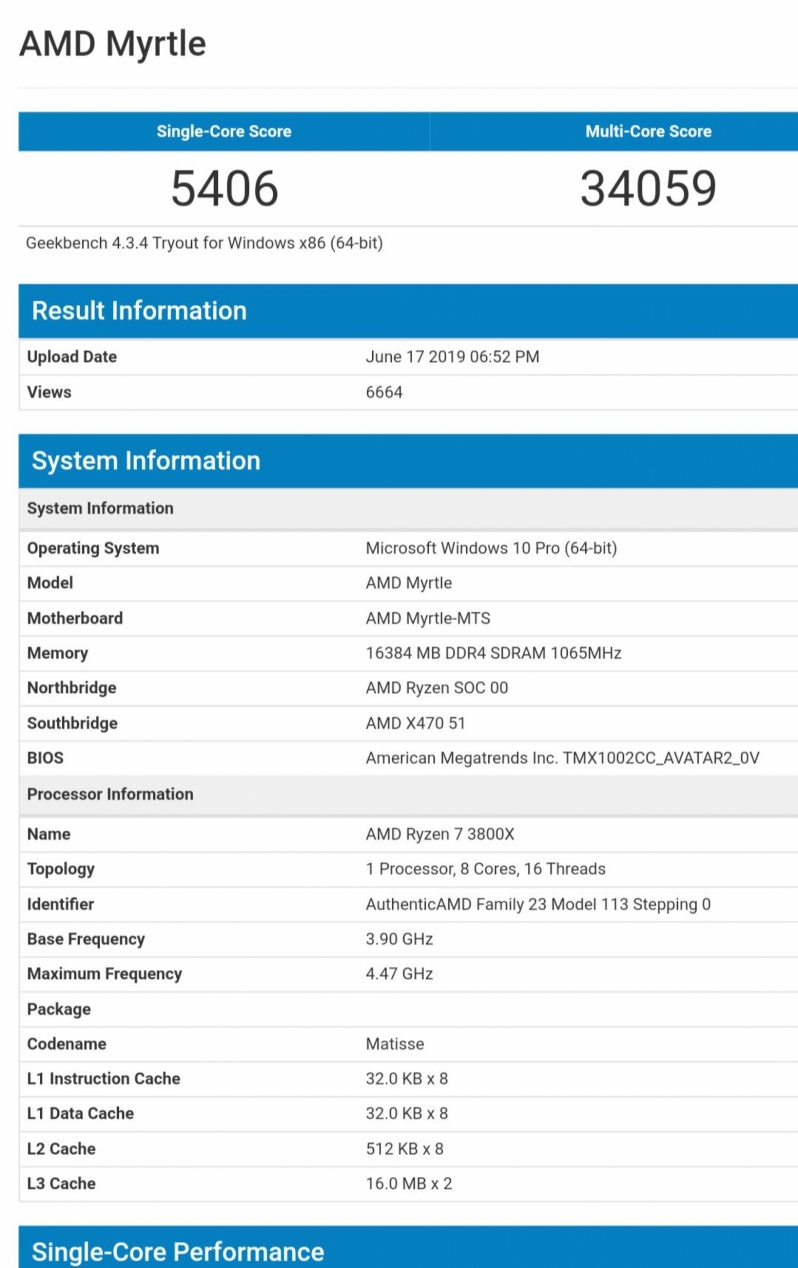 The most important takeaway from this is that Zen 2/AMD's Ryzen 3rd Generation processors are addressing many of the performance shortcomings of the company's existing Ryzen lineup, making AMD's Zen-based designs more competitive than ever before, especially when combined with Zen 2's higher clock speeds and increased power efficiency. Intel should be worried about Zen 2's impact on the PC market.

You can join the discussion on AMD's Ryzen 7 3800X performance on the OC3D Forums.

smilertoo
This shows the main difference between AMD and Intel, when AMD have a decent technology they give you what they can; Intel are happy to drip feed tiny updates over years to bleed the customer dry.Quote

Avet
Quote:
What Intel gave you was the only thing that you could get. AMD was nowhere. It was Intel or nothing for years. Why wouldn't they milk it? AMD now has no choice but to go balls to the wall with everything they have. Because they must. They are in good time frame where Intel is caught slacking, and they are sizing the moment. Fire with all guns and capture as much territory while the opponent is polishing their guns.

With AMD back Intel has woken up. They may not have anything at the moment as a response, but when they do, they will try to beat AMD to a pulp with their massive wallet. And that is a good thing. We will have something new from Intel. Then AMD will poke them again. And stuff will happen. People will have a reason to upgrade hardware. And the most important thing... You will have a choice. Blue or red.Quote

Bagpuss
I fail to see why this is so impressive (single core) when my 5yr old 4690K (4.6Ghz) matches this score.

looz
Quote:
It's impressive when AMD manages it.