When AMD released their Ryzen mobile series of CPUs, they launched under U-series branding, acting as general purpose mobile processors, rather than focusing on their use of Vega graphics.

It was clear that AMD had the potential to release more powerful mobile processors, after all, Ryzen mobile uses the same silicon as AMD's Ryzen 5 2400G desktop APU (gaming performance review here). If AMD were willing to increase the TDP of their mobile chips, perhaps AMD could release mid-range gaming notebooks using the same silicon.

A reliable source of leaked information, TUM APISAK, has leaked an image which showcases 3DMARK specifications listings for a Ryzen 7 2800H CPU, with the H signifying its position as a high-performance mobile part. The listing shows that the CPU uses the full feature set of AMD's Raven Ridge Silicon, offering users four cores, eight threads and a Vega 11 GPU. Sadly the clock speeds of this mobile GPU are unknown. 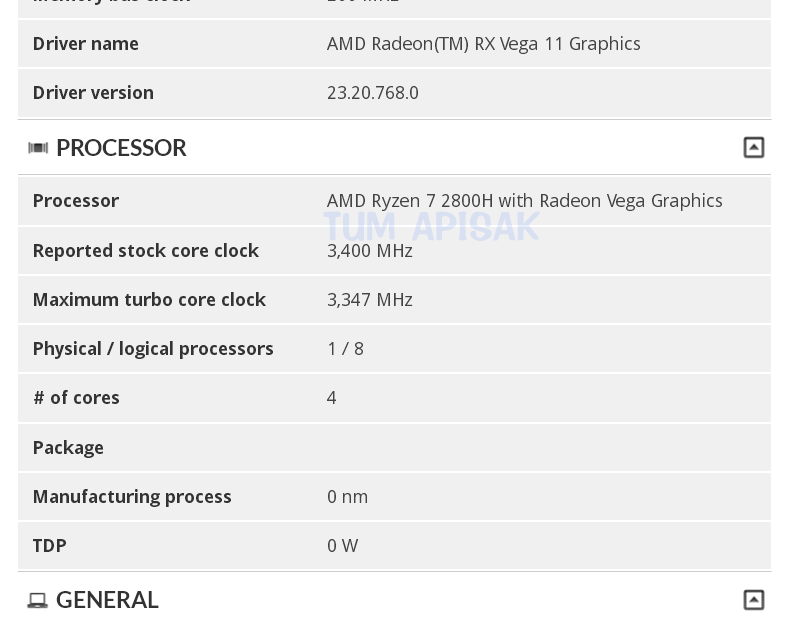 AMD's plans with Ryzen-H Mobile is simple, create mid-range systems with reasonable levels of CPU and GPU performance. This SKU will get more Ryzen-based systems into the marketplace and help to give Radeon more market share, a win-win for AMD. AMD also has the option to ship these systems with mid-range Radeon offering like the RX 550 or 560, to create viable mobile gaming machines.

You can join the discussion on AMD's Ryzen 7 2800H mobile APU on the OC3D Forums.

NeverBackDown
Would be pretty good honestly for the market. Currently midrange GPUs are using 1050's or lower with some using dual core CPUs w/HT so this should help.Quote

wozza365
Good! Hope it can bring down prices. The MX150 is about the same as an 850M. The laptop I bought containing a 850M is 4 years old and MX150 laptops are selling almost for the same price that I paid.Quote
Reply