New benchmarks have emerged from an AMD Ryzen CPU that is believed to be the 8-core R7 1700X, giving PC builders what could be our first look at the performance of AMD's new Ryzen architecture.
Before looking at these numbers a few things need to be established, first that this is an engineering sample and not a final CPU, second that this system was tested using a low-end MSI A320 Ryzen motherboard with 2400MHz memory, all of which can negatively affect these benchmark results in the charts below.
One other thing to note is that in this test CPU core Turbo mode as not detected, so it could potentially be inactive during this test.
The timing on the DDR4 memory are particularly bad, sitting with fairly loose timings of (17-17-17-39 2T), which combined with a rather low speed of 2400MHz could have a notable effect on this CPU's performance, especially when compared to X99 Intel's CPUs that run with quad-channel memory.
Compare this to the i7 6800K in the tables below, that is known to be using quad-channel 3200MHz memory with timings of 16-18-18-38. This means that this is far from an apples-to-apples comparison, though certainly results that are worth looking at. 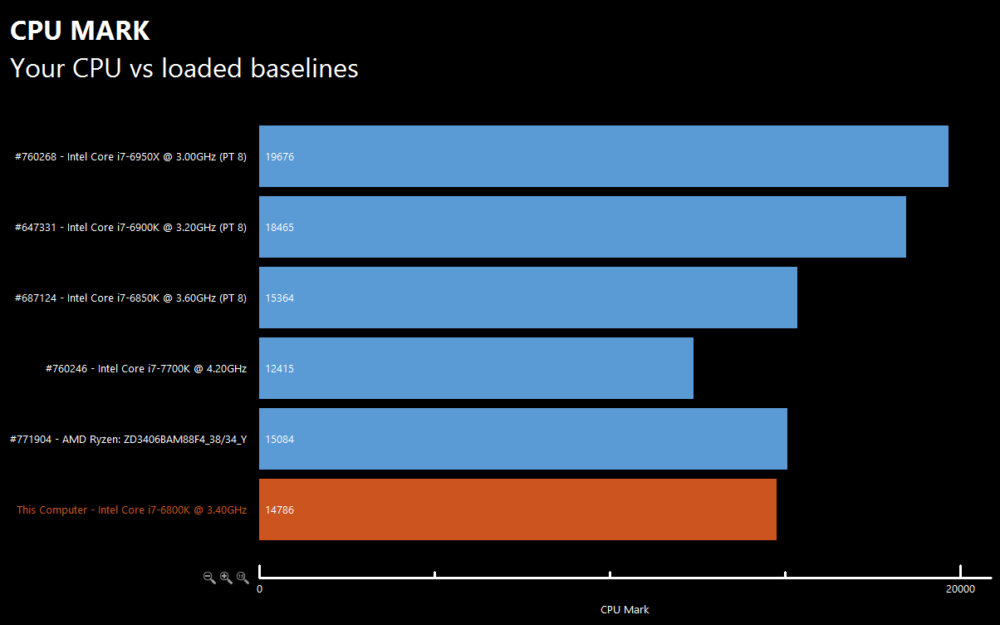 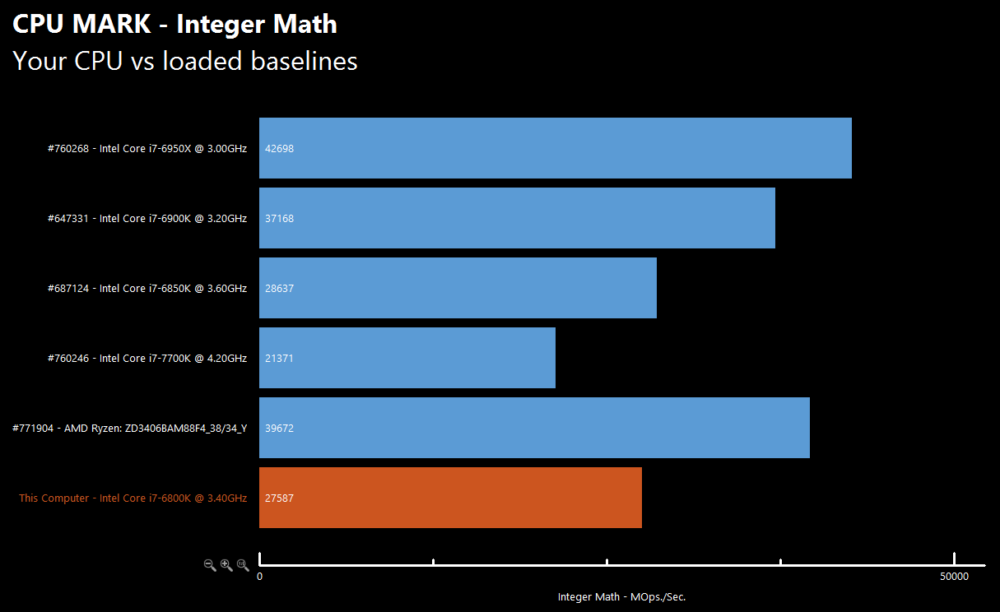 These tests are from CPUMARK, which tests several aspects of CPUs from single-core performance, integer math, floating-point performance and many more forms of calculations. Here we have 9 different CPU-related tests on AMD's Ryzen CPU engineering sample as well as data from a lot of recent Intel CPUs like the 7700K and the i7 6900K.

When looking at the Integer Math score we can see that AMD's Ryzen architecture can really pack a punch, with AMD's engineering sample actually besting Intel's i7 6900K, which is a highly impressive result for AMD, especially given the fact that this CPU is not the Ryzen flagship model. 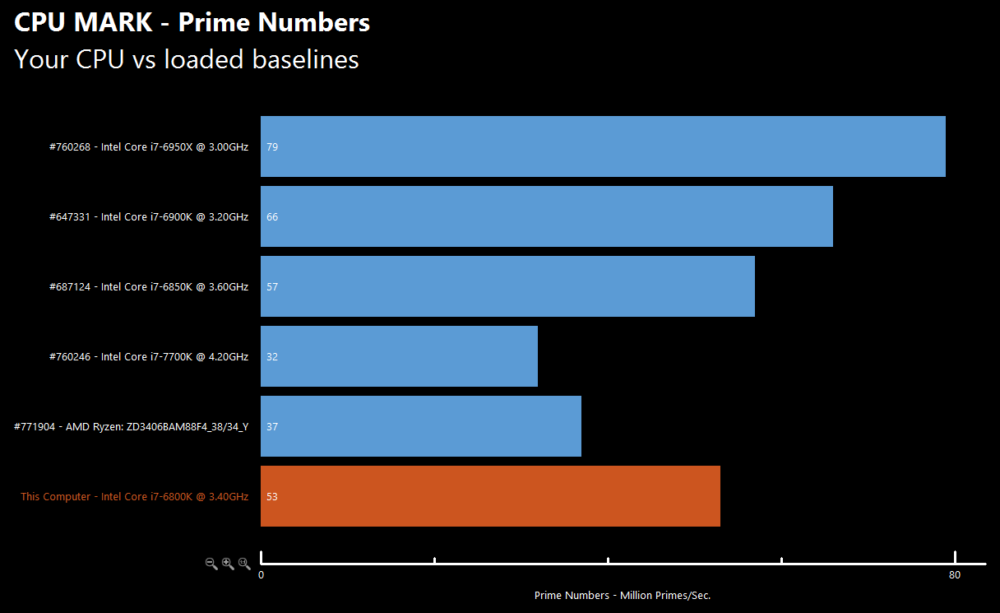 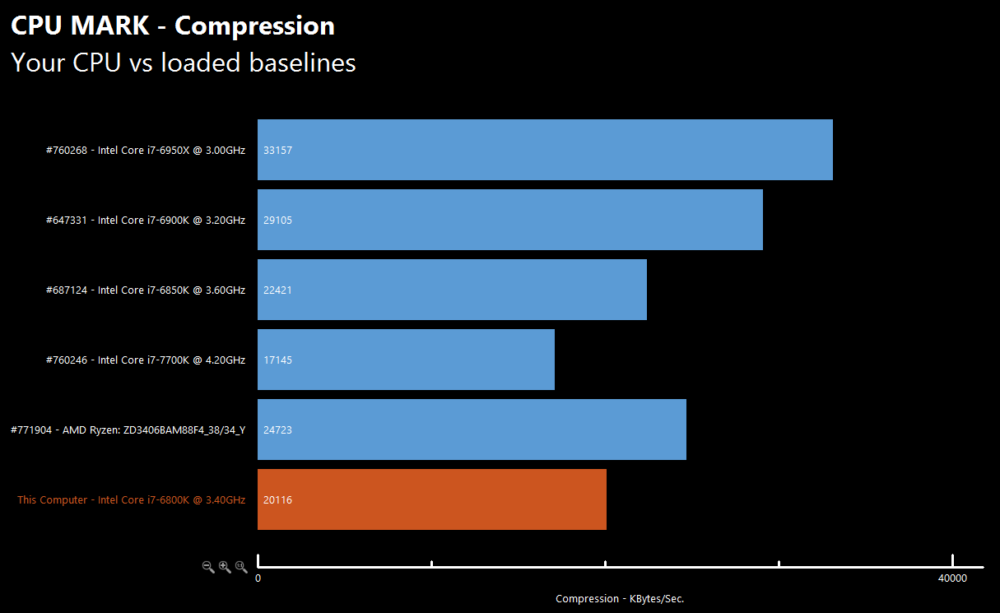 Moving down to prime numbers we see AMD fall behind here, though Ryzen is still enough to beat Intel's i7 7700K, though it is worth noting that that CPU is a quad-core and not an 8-core. Here Intel has a clear advantage,

In the compression test AMD's Ryzen CPU is able to compete well with Intel's i7 6900K and i7 6850K, which is grat news given AMD's rumoured pricing and the fact that this is not the rumoured 3.6/4GHz Ryzen flagship. 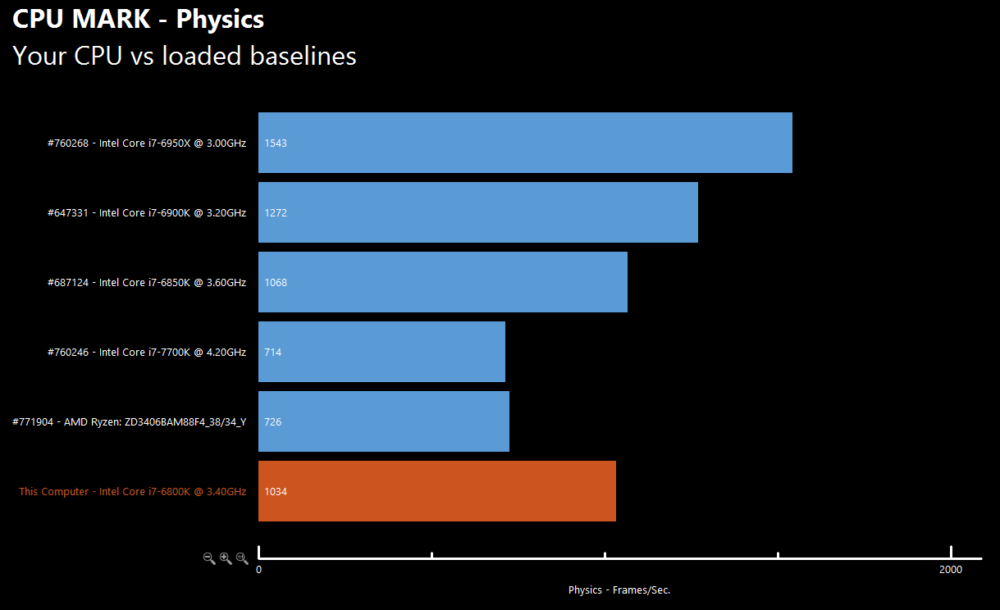 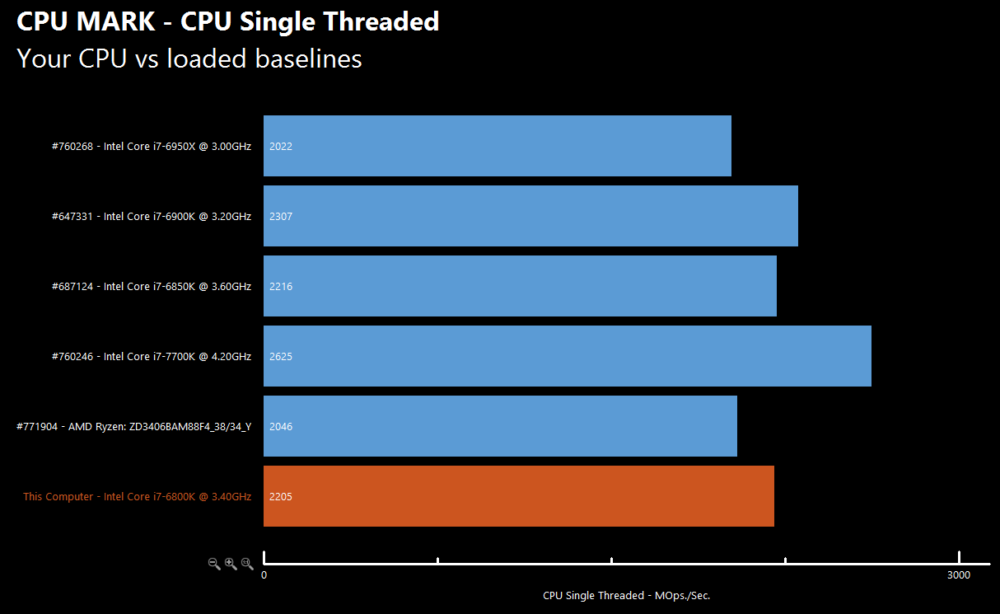 In Single threaded performance, this Ryzen CPU sample is shown to have similar performance to Intel's i7 6950X, falling a little behind Intel's higher clocked CPUs. Even so, this single-core performance is much higher than anything that AMD has offered previously, which is a fantastic change for the company. 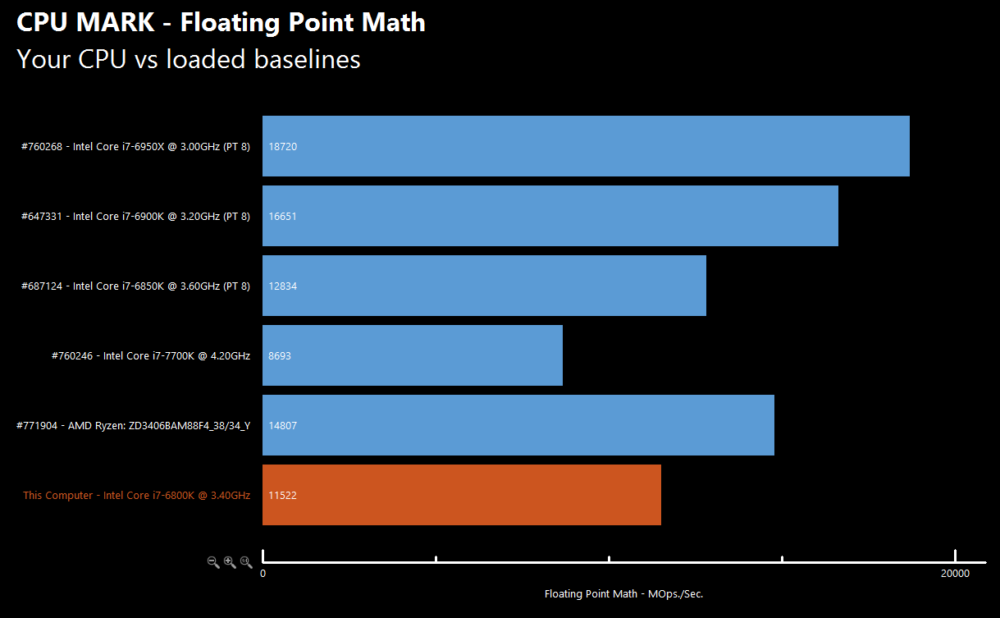 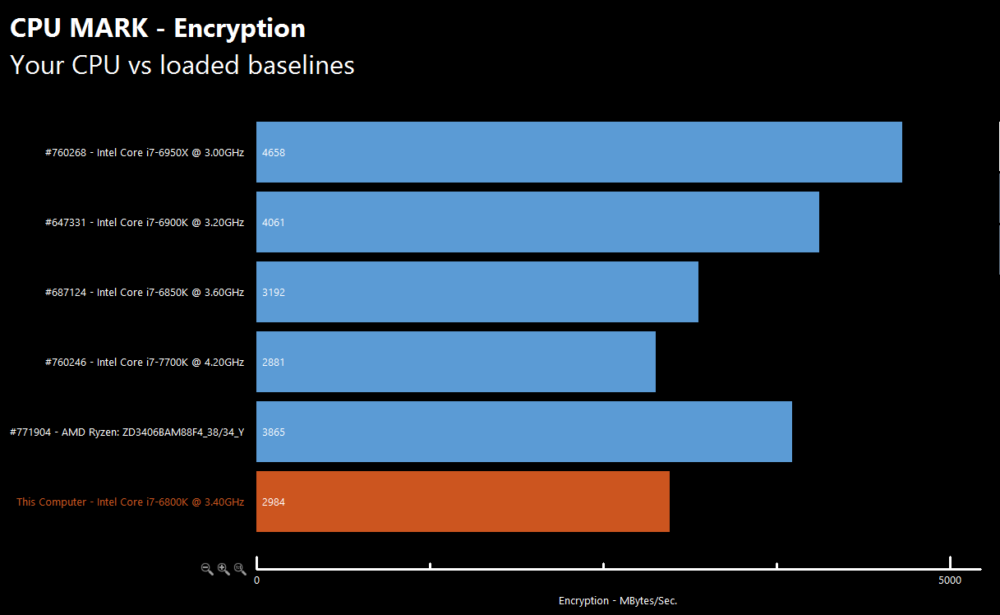 Moving to Floating point and Compression performance and we can see that this Ryzen CPU sample offers performance that is in-between Intel's i7 6850K and i7 6900K, which is fantastic levels performance given Ryzen's leaked pricing. While it seems like the best per-core performance is still provided by Intel, it looks like AMD will be offering a lot of value with Ryzen, which is something that Intel should be concerned about. 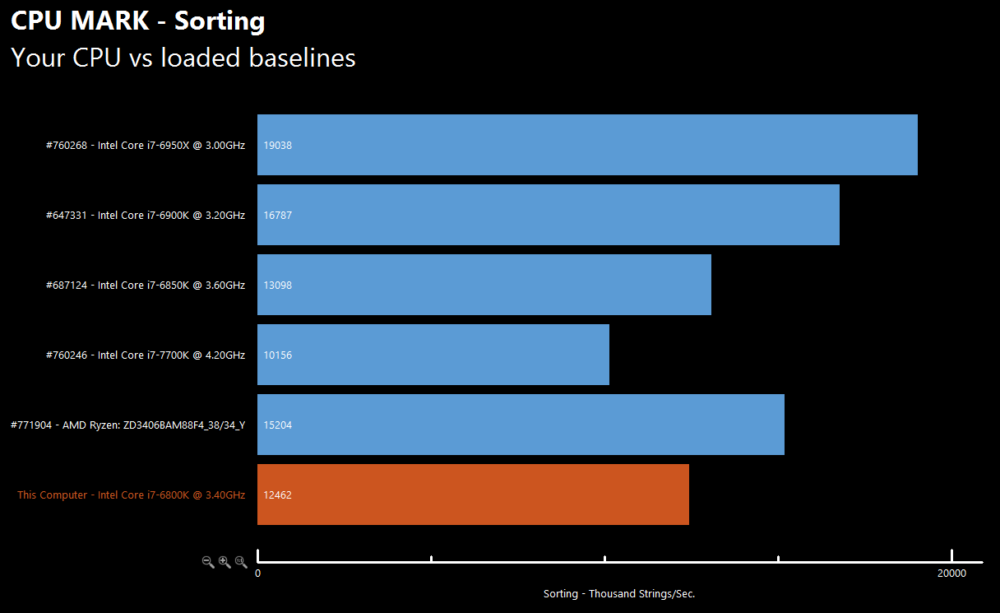 Looking at these results we can see that both AM and Intel CPUs have their strong points, though it seems like this is far fro the best that Ryzen CPUs can offer. It will be interesting to see how AMD's higher clocked Ryzen processors will perform, especially when combined wit faster memory.

You can join the discussion on these new AMD Ryzen performance leaks on the OC3D Forums.

I just about beat a stock 6800k which makes it quite believable, as I have two more cores and more cache to offset the IPC.Quote

wozza365
If this is true. Oh daaaaaaamn.

AlienALX
Quote:
On another forum I post on we did the Blender test. Nobody could match Ryzen. Not even with a 5820k at 4.6ghz. It was close, but yeah, couldn't match it.

And this test seems to check out OK too. I scored right about where I should.

Right now it's looking like Ryzen is seriously quick.Quote

WYP
As always we will have to wait for independent reviews etc before we can truly know what is going on, though to say the least, I am excited to see how Ryzen performs over a wide range of applications.

Here's hoping that I can test Ryzen out for myself sometime, I would love to see how the quad-cores compare when gaming especially.Quote

boria0
When clicking on cpu mark compression benchmark image browser is asking for my login and password although I'm already logged in !!!!!! Can someone chceck itQuote
Reply