The Singaporean retailer Bizgram has released a product catalog which features a wide range of AMD's Ryzen 3rd Generation processors, their names and retail prices.

On the high-end AMD's Ryzen 3rd Generation processors will allegedly offer up to 16 cores and 32 threads, at least according to existing rumours/speculation. On the high-end, AMD is also expected to release a Ryzen 9 branded processor called the Ryzen 9 3850X, which allegedly offers sixteen cores and thirty-two thread. When pricing is converted from Singapore Dollars, the Ryzen 9 3850X costs around £425/$561 at Bizgram, though this conversion does not consider factors like sales tax or VAT.

It is worth noting that these processor names perfectly match existing leaks from AdoredTV (link), making it possible that this Singapore retail listing is copying leaked material for promotional purposes. On the other hand, they may have received this information independently from another source. That said, AMD is unlikely to disclose the retail pricing of any product that is months away from launch, as their pricing must be based on the competitive landscape at the time of launch, which is always subject to change.

Other recent leaks have placed the launch of AMD's Ryzen 3rd Generation processors at Computex 2019, with a launch later in 2019. Below are the prices that are covered by the Bizgram listing as well as previously leaked specifications for each processor.

Just to be clear, this leak appears to be bogus, taking the names from leaked specs lists that originated before AMD revealed their Ryzen 3rd Generation series of processors at CES 2019. In all likelihood, these product listings are placeholders, as AMD would never release final product prices this far before launch, as such decisions are often made very close to launch based on current market conditions. 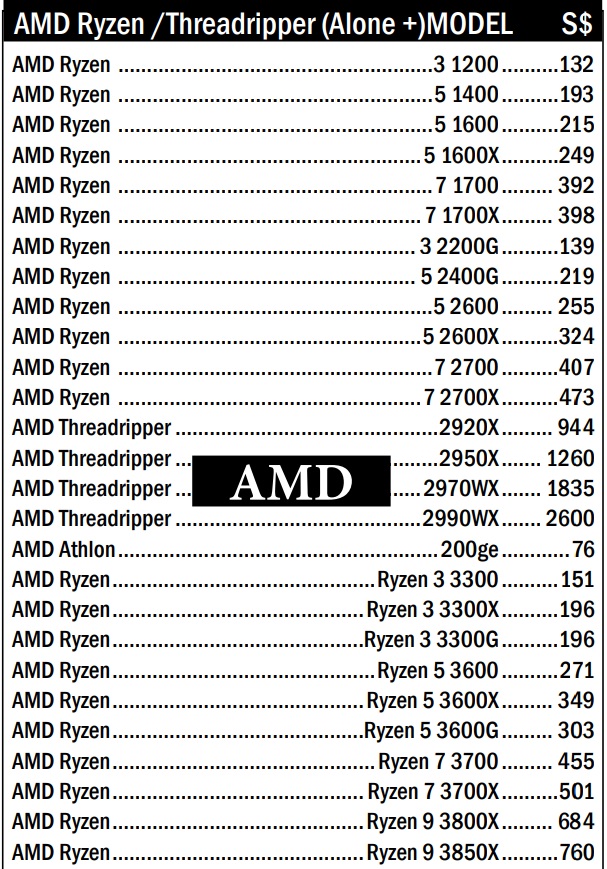 AMD's Ryzen 3rd Generation processors will release with PCIe 4.0 support and be compliant with today's AM4 motherboards, all thanks to AMD's ongoing commitment to their AM4 socket. AMD's rumoured increase in AM4 core counts are not expected to have a negative impact on existing motherboards, thanks to both the increased efficiency of their Zen 2 core design and their use of TSMC's leading-edge 7nm lithography node, though it is likely that newer X570 series motherboards may be required to access the full potential of Ryzen 3rd Generation processors.

You can join the discussion on AMD's Ryzen 3rd Generation CPUs and pricing leaks on the OC3D Forums.

g0ggles1994
If these prices do turn out to be final, the UK pricing must be excluding VAT. No chance that top CPU is less than £500!
Still though, 5GHz on a 16C32T? Sign me up!Quote

tgrech
Yeah besides all the other holes in this leak and past similar leaks mentioned (There's quite a lot) we have two massive outliers, "Ryzen 3 3300G" and "Ryzen 5 3600G". We know for a fact the Ryzen 3000G series are 12nm Zen+/Vega based parts, not 7nm Ryzen2/Navi, and so certainly not 6/8 core parts.Quote

Yet they did it.

I know it sounds too good to be true (and believe me I'm the most cynical suspicious chap you'll ever meet) but to AMD it's just silicon. The reason TR is so expensive is because it's 4 quite large dies, regardless of core count. It's also a big chip, and a massive socket. I guess AMD are just selling silicon, regardless of the core count with Ryzen.

However, being real? this is what *should* happen in the computing world. When something costs less to make the price should not go up. It should remain the same, or slightly more, but you should get much more for your cash. Not continual refreshes of a quad core CPU for the same price.

The entire market is becoming stale because poser grade set in. It never used to be like that. All of a sudden you've got rich people now wanting gaming PCs and before you know it the prices are insane.

I was talking to my mother about it the other day. I can buy a chicken for about £2.80 from Asda, right. For the two breasts my butcher charges £7, and the wings, thighs and legs used to go in the bin. Now all of a sudden 6 chicken wings is about £6 from a restaurant with some sauce spread across the top ffs.Quote

WYP
Quote:
Yeah. AMD also confirmed that there was no APU version of Mattisse with an 8c CPU chiplet + a GPU chiplet. I don't expect Zen 2 APUs until 2020, or at a best late 2019. Even then I expect the CPU to be monolithic, single die.

And you are right, the 3000-series APUs are all 12nm Ryzen 2nd Gen so far. That said, those parts are all mobile SKUs. No desktop versions of those yet.Quote
Reply