A lot of information about AMD's upcoming Ryzen 2nd generation CPUs has leaked, revealing a lot about the company's upcoming 2018 CPU lineup. For starters, it looks like AMD won't be releasing a 1800X successor, instead releasing their 2700X as their flagship model.

While this may seem like a strange decision, it is widely thought that the 1800X sales were cannibalised by the existence of the lower-cost 1700X, which offers most of the 1800X' performance with a significantly lower cost. Looking at the 2700X it will offer clock speeds that exceed the old 1800X, while also shipping with AMD's new Wraith Prism RGB illuminated cooler. If this information is correct, the 2700X will ship for $369 with a stock cooling solution.

This leak comes from elchapuzasinformatico providing what appears to be official AMD slides. 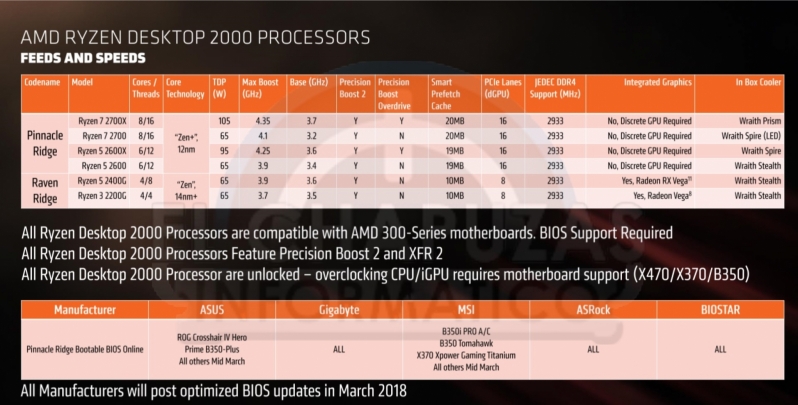 Strangely, it looks like AMD's Ryzen 7 models will offer 1MB more "Smart Prefetch Cache" than their Ryzen 5 counterparts, though this is unlikely to have a significant performance impact. 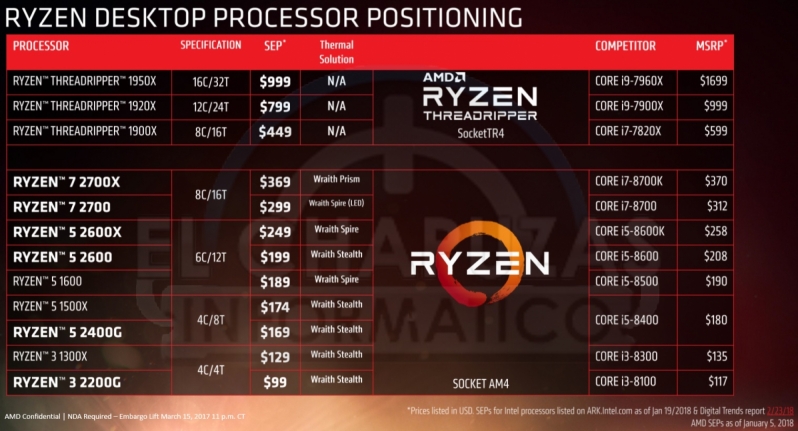 Ryzen 2nd Gen CPUs will be supported by existing 300-series motherboards, though these boards will require a BIOS update to function with these new models. New 400-series motherboards will release with these new CPUs, which will support Ryzen 2 out of the box. The slide below also mentions improved Prefetch, which can increase Ryzen's performance in certain situations. 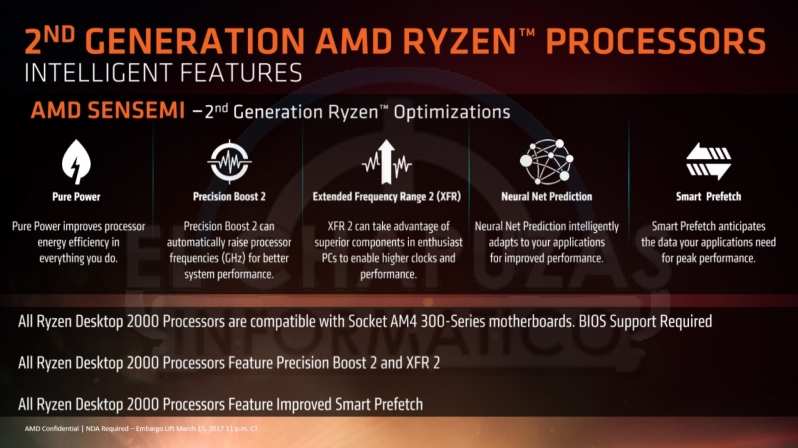 In the slide below AMD details the advantages of XFR2, Precision Boost 2.0 and the company's new Precision Boost Overdrive feature, which will allow AMD to offer increased performance in workloads with intermediate core-count, rather than boosting just one or two cores like AMD's original Ryzen processors.

Precision Boost Overdrive looks like a form of Auto overclock, which seems to be limited to X-series processors on 400-series chipsets. 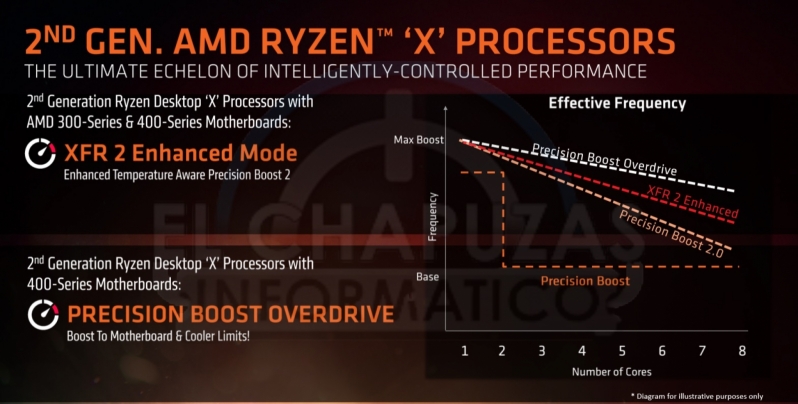 These motherboards will release with Ryzen 2nd generation processors in April. 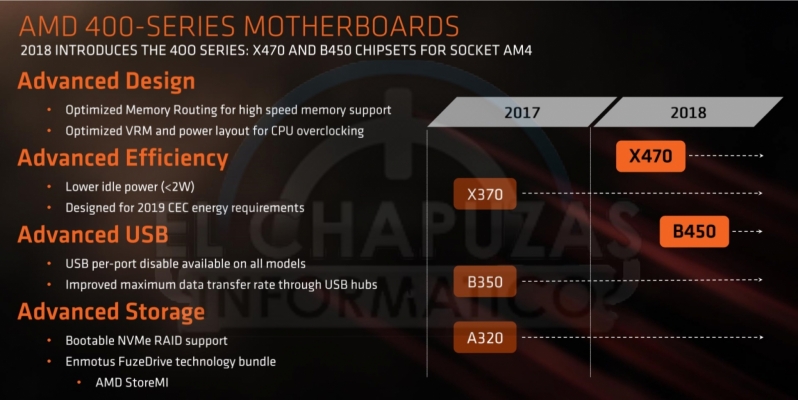 In gaming applications, Ryzen 2nd Generation processors will outperform their 1st generation counterparts, with AMD revealing a 5% performance boost in average at 1080p with a GTX 1080 GPU. This improvement is likely due to Ryzen 2's higher core clock speeds.

AMD also compares their processors to Intel 8700K, revealing performance that is very close to Intel in most cases, with an average of a 7.7% performance disadvantage. This isn't a bad result for AMD, though it is clear that Intel will maintain their gaming lead. 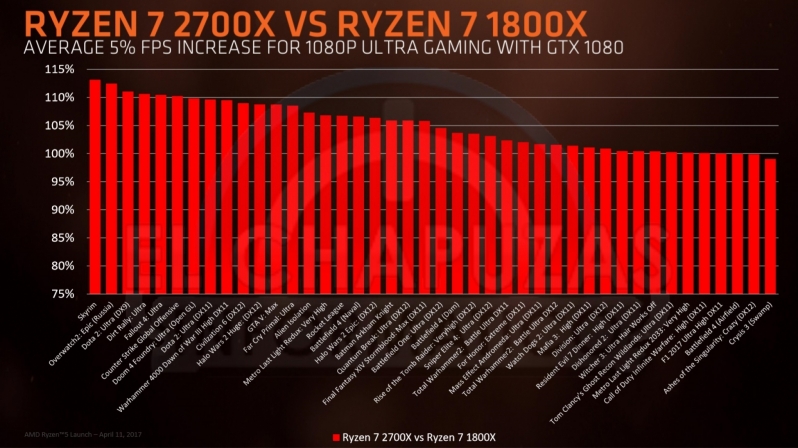 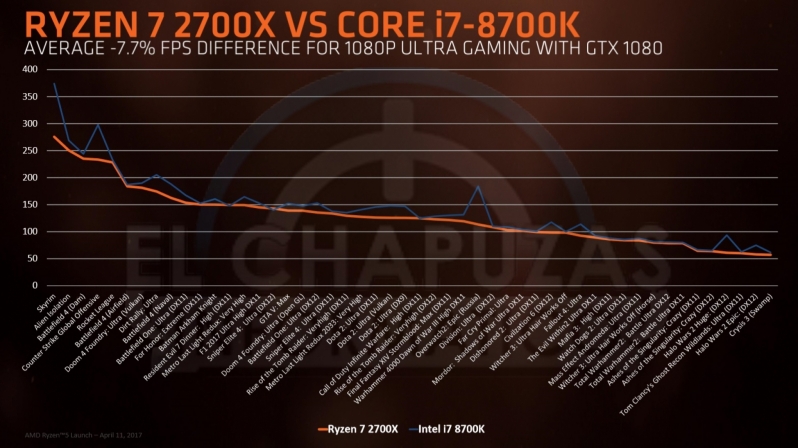 Just like all leaks, please take this data with a grain of salt, though if this data is true AMD will have a solid Ryzen 2nd generation lineup.

You can join the discussion on AMD's Ryzen 2nd Generation leaks on the OC3D Forums.

I'm hoping those tests are extremely fake and it's a viable upgrade from an 1800X.Quote

Those are big numbers dude, especially for a refresh. That should put it in line with my 14/28 BE running 2.9ghz.

I am not surprised there is no 2800x. The 1800x was totally pointless. Having never touched Ryzen before or even so much as entered the BIOS on a Ryzen board I OCed my mate's 1700 by proxy to 3.9ghz in about 25 minutes over Skype. If I had the board in my possession that would have been about ten seconds.Quote

Vintage-x
look in the bottom left hand corner of some of the slides.

Either a typo or fakeQuote

TBH 3Dmark has never really liked AMD CPUs at all. You need to remember though this is literally a refresh. Intel got 3-5% so yeah, don't be over hopeful. It might turn out to be equally as pointless as buying every Intel refresh, too. Might wanna skip a couple then get one.Quote
Reply