Cinebench results for AMD's Ryzen 1600X CPUs have now leaked online, offering results that are similar to Intel's i7 6850K for an expected retail price of $260.
These results are huge for AMD, as the results below are only just below the results that Intel's i7 6850K achieved in our internal testing (CPU Score of 1191). This gives AMD's Ryzen CPUs almost identical IPC to Intel's Broadwell-E architecture, with the i7 6850K running at a 3.4GHz base clock and 3.8GHz boost clock when compared to AMD's Ryzen 1600X's leaked clock speeds of 3.3GHz base and 3.7GHz boost.
This places AMD's Ryzen CPUs as a great competitor to Intel's X99 lineup, though Ryzen is expected to come with much lower pricing and a c more affordable selection of high-end and low-end motherboards. 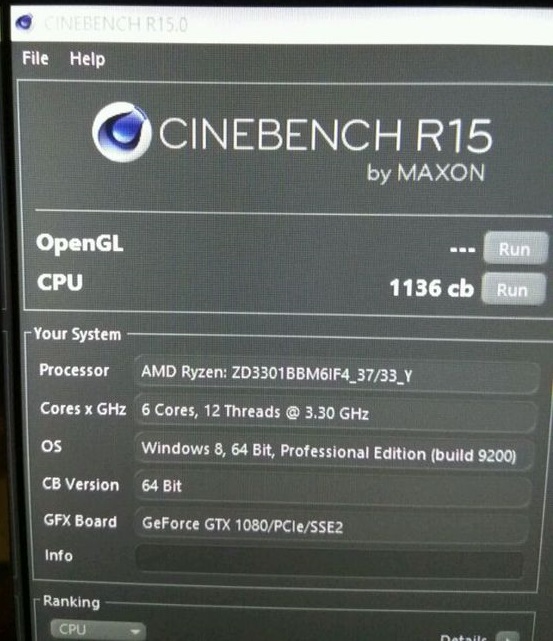 If AMD's Ryzen CPUs live up to recent performance and pricing leaks it looks like AMD will truly be back on the road to success, bringing them back into the high-end of the CPU marketplace and giving them a huge opportunity to gain market share over the next few years.

During their Q4 earnings call, AMD has confirmed that their new Ryzen CPUs and AM4 series motherboards will be launching in early March, which means that we should expect to hear some official information on these new CPUs and motherboards soon.

You can join the discussion on AMD's Ryzen 1600X CPU on the OC3D Forums.

Bartacus
I WANT to believe! I just hope it's true, and not another piece of leaked AMD marketing B.S.Quote

AlienALX
Quote:
The Blender result was questionable. Not as in were AMD cheating but more because you can skew the results in Blender.

The CPUZ benchmark was questionable, because it's sketchy as hell and I have never used it as a real bench mark of what a CPU can do.

This though? I don't really think there is any way to cheat Cinebench. I have always used it as my go to "who can urinate the highest" CPU benchmark.

This scores ever so slightly higher than my Ivy 8 core 16 thread. If this is stock speed? I'm totally a believer. Even if it's not no quad core from Intel at the same sort of price can match that score.Quote

Kaapstad
Looks good to me.

Ando
This 1600x is looking like it will send shockwaves through the PC community... 6800k performance for i5 pricing is crazy good!Quote
Reply