A image of AMD's latest consumer CPU roadmap is now available to view online thanks to a leaker called @sebuahsarang on Twitter. This roadmap confirms AMD's plans to reveal and released V-Cache enhanced Ryzen 7000 X3D processors, new AM5 based APUs, and a successor to their Threadripper 5000 series of workstation processors.

With the addition of AMD's 3D V-Cache technology, AMD should be able to greatly expand the L3 cache that is available on their Ryzen 7000 series processors, accelerating a number of workloads by allowing their Zen 4 processors to hold more data on-package. This allows AMD's L3 cache to store more data and for this stored data to be accessed by AMD's Zen 4 CPU cores a lot faster than accessing the same data through DRAM. This accelerates the performance of several workloads, with gaming being the most important workload for AMD's consumer-grade Ryzen 7000 series. 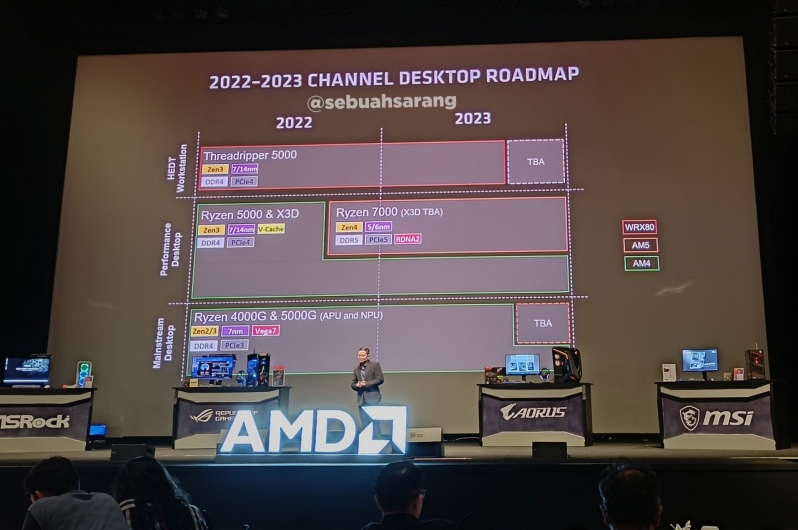 AMD's roadmap has also confirmed that AMD has plans to launch a successor to their Threadripper 5000 series using a to be announced (TBA) CPU platform. We can guess that this new Threadripper lineup will be AMD's Threadripper 7000 Pro series, which will likely arrive on a new CPU socket and motherboard platform that supports both PCIe 5.0 connectivity and DDR5 memory.

You can join the discussion on AMD's Ryzen 7000 X3D CPUs and Threadripper 5000 successor leaking via a new AMD roadmap on the OC3D Forums.

AngryGoldfish
A 7800X3D is obviously gonna be an amazing CPU and could possibly be cooler and quieter to run than a 7700X while performing better in games. But it'll be very expensive. How many people will truly see the benefit of that when most of us are maximising graphics/resolution over 165+ FPS? Most gamers are happy somewhere between 60-144 FPS, and a 12600K will give you that for way less money. If I had a budget for a 7800X3D, DDR5, and a X670 motherboard, I'd also have the budget for a 3080-class graphics card. In which case I'd get more performance by buying a cheaper CPU/platform and putting that extra money to a 3080Ti-class graphics card. That's why I think the idea of waiting for this X3D model doesn't make a lot of sense. If AMD released a 7600X3D for $350 and B650 motherboards and affordable DDR5 were available by then, that would be different.Quote

MainSource77
so because it doesnt fit your particular upgrade path, it doesnt make sense? It isnt all about you buddy. many people own the latest and greatest because they are what are known as enthusiasts . i know...wild concept.Quote

WillSK
I think AngryGoldfish's assessment was a sensible one, it adds to the conversation and at no point did he contradict the mentality of enthusiasts. I think a bit of chill is needed with the passive aggressiveness dude...Quote

NeverBackDown
Quote:
For gaming this approach makes sense. If you are utilizing all the extra grunt it gives you for non gaming workloads then it would make sense to wait if you can.

I'm not sure how gaming/streaming would perform or benefit from 3D cache but that's about the only gaming reason I could imagine extra CPU being necessary... Most people use NVEC though which defeats the purpose.Quote

Dawelio
Quote:
You should drop the attitude dude, theres no need for it. What he said is basically a sensible and budget friendly one, which is a concept that exist. I know wild right?Quote
Reply